Mycosis fungoides is the most common form of cutaneous T-cell lymphoma. It generally affects the skin, but may progress internally over time. Symptoms include rash, tumors, skin lesions, and itchy skin.

While the cause remains unclear, most cases are not hereditary. Most cases are in people over 20 years of age, and it is more common in men than women. Treatment options include sunlight exposure, ultraviolet light, topical corticosteroids, chemotherapy, and radiotherapy.

The symptoms of mycosis fungoides are categorized into three clinical stages: the patch stage, the plaque stage, and the tumour stage.[2] The patch stage is defined by flat, reddish patches of varying sizes that may have a wrinkled appearance. They can also look yellowish in people with darker skin.[2] The plaque stage follows the patch stage of mycosis fungoides.[3] It is characterized by the presence of raised lesions that appear reddish-brown; in darker skin tones, plaques may have a greyish or silver appearance.[4] Both patch and plaque stages are considered early-stage mycosis fungoides.[3] The tumour stage typically shows large irregular lumps. Tumours can develop form plaques or normal skin in any region of the body, including the face and head regions.[5]

The cause of mycosis fungoides is unknown. A current hypothesized cause is genetic and cellular signalling abnormalities. Examples of these abnormalities include clonal abnormalities and altered expression of adhesion molecules and/or cytokins.[7]

Additionally, the disease is an unusual expression of CD4 T cells, a part of the immune system. These T cells are skin-associated, meaning they are biochemically and biologically most related to the skin, in a dynamic manner. Mycosis fungoides is the most common type of cutaneous T-cell lymphoma (CTCL), but there are many other types of CTCL that have nothing to do with mycosis fungoides and these disorders are treated differently.[8]

Diagnosis is sometimes difficult because the early phases of the disease often resemble inflammatory dermatoses (such as eczema, psoriasis, lichenoid dermatoses including lichen planus, vitiligo, and chronic cutaneous lupus erythematosus), as well as other cutaneous lymphomas.[9] Several biopsies are recommended, to be more certain of the diagnosis.

The criteria for the disease are established on the skin biopsy:[10] 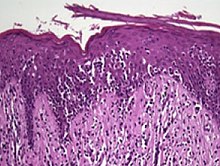 To stage the disease, various tests may be ordered, to assess nodes, blood and internal organs, but most patients present with disease apparently confined to the skin, as patches (flat spots) and plaques (slightly raised or 'wrinkled' spots).

In the mycotic stage, infiltrative plaques appear and biopsy shows a polymorphous inflammatory infiltrate in the dermis that contains small numbers of frankly atypical lymphoid cells. These cells may line up individually along the epidermal basal layer. The latter finding if unaccompanied by spongiosis is highly suggestive of mycosis fungoides. In the tumorous stage a dense infiltrate of medium-sized lymphocytes with cerebriform nuclei expands the dermis.

Accurate staging of Mycosis Fungoides is essential to determine appropriate treatment and prognosis.[13] Staging is based on the tumor, node, metastasis, blood (TNMB) classification proposed by the Mycosis Fungoides Cooperative Group and revised by the International Society for Cutaneous Lymphomas/European Organization of Research and Treatment of Cancer.[13] This staging system examines the extent of skin involvement (T), presence of lymph node (N), visceral disease (M), and presence of Sezary cells in the peripheral blood (B).[13]

There is limited evidence for the efficacy of topical and systemic therapies for mycosis fungoides.[15] Due to the possible adverse effects of these treatments in early disease it is recommended to begin therapy with topical and skin-directed treatments before progressing to more systemic therapies.[15] Larger and more extensive research is needed to identify effective treatment strategies for this disease.[15]

In 2010, the U.S. Food and Drug Administration granted orphan drug designation for naloxone lotion, a topical opioid receptor competitive antagonist used as a treatment for pruritus in cutaneous T-cell lymphoma.[16][17]

The US FDA approved the drug mogamulizumab (trade name Poteligeo) in August 2018 for treatment of relapsed or refractory mycosis fungoides and Sézary disease.[18]

It is rare for the disease to appear before age 20, and it appears to be noticeably more common in males than females, especially over the age of 50, where the incidence of the disease (the risk per person in the population) does increase. The average age of onset is between 45 and 55 years of age for patients with patch and plaque disease only, but is over 60 for patients who present with tumours, erythroderma (red skin) or a leukemic form (the Sézary syndrome). The incidence of mycosis fungoides was seen to be increasing till the year 2000 in the United States,[20] thought to be due to improvements in diagnostics. However, the reported incidence of the disease has since then remained constant,[21] suggesting another unknown reason for the jump seen before 2000.

Mycosis fungoides was first described in 1806 by French dermatologist Jean-Louis-Marc Alibert.[22][23] The name mycosis fungoides is very misleading—it loosely means "mushroom-like fungal disease". The disease, however, is not a fungal infection but rather a type of non-Hodgkin's lymphoma. It was so named because Alibert described the skin tumors of a severe case as having a mushroom-like appearance.[24]

In 1995 actor Mr. T was diagnosed with a cutaneous T-cell lymphoma, or mycosis fungoides.[25] Once in remission, he joked about the coincidence: "Can you imagine that? Cancer with my name on it — personalized cancer![26]"