An ingrown nail is a nail disease in which the nail grows into the toe or finger.[3] Symptoms include pain, swelling, and redness.[2] More severe cases may present with skin breakdown, purulent drainage, and increased tissue build up.[2] The big toe is most commonly involved.[2] Complications can include infection of the nail fold.[2]

The most common cause is improper cutting of the nails.[2] Other risk factors include tight shows, excessive sweating, injury, and certain medications such as cetuximab.[2] The underlying mechanism involves the edge of the nail growing into the skin of the toe resulting in inflammation and infection.[2] Diagnosis is based on symptoms.[2]

Treatments may include warm water soaks, wider shoes, and not cutting the nail short.[3] Paracetamol (acetaminophen) and ibuprofen may be used to help with the pain.[3] A number of efforts such as placing a cotton wick under the corner or the nail or inserting a gutter splint around the nail edge may be used.[2] A number of surgical procedures can also be done, such as a wedge resection or removal of the surrounding skin.[2]

Ingrown toenails are common, affecting about 2.5% to 5% of people.[2] Older children and younger adults are most commonly affected.[2] Males are twice as frequently affected as females.[2] Re-occurrence can occur.[2]

Symptoms of an ingrown nail include pain along the margins of the nail (caused by hypergranulation that occurs around the aforementioned margins), worsening of pain when wearing tight footwear, and sensitivity to pressure of any kind, even the weight of bedsheets. Bumping of an affected toe can produce sharp and even excruciating pain as the tissue is punctured further by the nail. By the very nature of the condition, ingrown nails become easily infected unless special care is taken early to treat the condition by keeping the area clean. Signs of infection include redness and swelling of the area around the nail, drainage of pus and watery discharge tinged with blood. The main symptom is swelling at the base of the nail on the ingrowing side (though it may be both sides).

Onychocryptosis should not be confused with a similar nail disorder, convex nail, nor with other painful conditions such as involuted nails, nor with the presence of small corns, callus or debris down the nail sulci (grooves on either side). 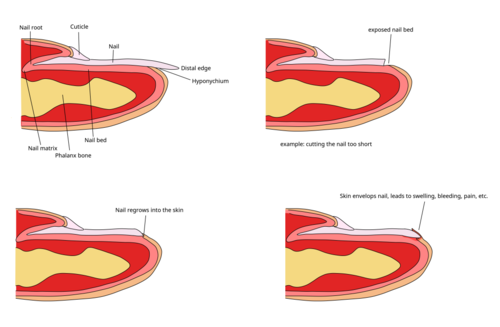 Simple representation of the formation of ingrown nails.

The main contributor to an ingrown toenail is footwear, particularly ill-fitting shoes with inadequate toe-box room and tight stockings that apply pressure to the top or side of the foot.[4][5] Other factors may include the damp atmosphere of enclosed shoes, which soften the nail-plate and cause swelling on the epidermal keratin (eventually increasing the convex arch permanently), genetics, trauma and disease. Improper cutting of the nail may cause the nail to cut into the side-fold skin from growth and impact, whether or not the nail is truly "ingrown". The nail bends inwards or upwards depending on the angle of its cut. If the cutting tool, such as scissors, is at an attitude in which the lower blade is closer to the toe than the upper blade, the toenail will tend to grow upwards from its base, and vice versa. The process is visible along the nail as it grows, appearing as a warp advancing to the end of the nail. The upper corners turn more easily than the center of the nail tip. Holding the tool at the same angle for all nails may induce these conditions; as the nail turns closer to the skin, it becomes harder to fit the lower blade in the right attitude under the nail. When cutting a nail, it is not just the correct angle that is important, but also how short it is cut. A shorter cut will bend the nail more, unless the cut is even on both top and bottom of the nail.

One study compared patients with ingrown toenails to healthy controls and found no difference in the shape of toenails between those of patients and of the control group. The study suggested that treatment should not be based on the correction of a non-existent nail deformity.[6][7] In some cases, however, there is nail deformity.[8]

Ingrown toenails are caused by weight-bearing (activities such as walking, running, etc.) in patients that have too much soft skin tissue on the sides of their nail. Weight bearing causes this excessive amount of skin to bulge up along the sides of the nail. The pressure on the skin around the nail results in the tissue being damaged, resulting in swelling, redness and infection. Many treatments are directed at the nail itself and often include partial or full removal of the healthy nail. However, failure to treat the cutaneous condition can result in a return of the ingrowth and a deformity or mutilation of the nail.

The most common digit to become ingrown is the big toe, but ingrowth can occur on any nail. Ingrown nails can be avoided by cutting nails straight across; not along a curve, not too short and no shorter than the flesh around it. Footwear that is too small or too narrow, or with too shallow a "toe box", will exacerbate any underlying problem with a toenail. Sharp square corners may be uncomfortable and cause snagging on socks. Proper cutting leaves the leading edge of the nail free of the flesh, precluding it from growing into the toe. Filing of the corner is reasonable. Some nails require cutting of the corners far back to remove edges that dig into the flesh; this is often done as a partial wedge resection by a podiatrist. Ingrown toe nails can be caused by injury, commonly blunt trauma in which the flesh is pressed against the nail causing a small cut that swells. Injury to the nail can cause it to grow abnormally, making it wider or thicker than normal, or even bulged or crooked.

The treatment of an ingrown toenail partly depends on its severity.[9]

Mild to moderate cases are often treated conservatively with warm water and epsom salt soaks, antibacterial ointment and the use of dental floss. If conservative treatment of a minor ingrown toenail does not succeed, or if the ingrown toenail is severe, surgical treatment may be required.[9] A "gutter splint" may be improvised by slicing a cotton-tipped wooden applicator diagonally to form a bevel and using this to insert a wisp of cotton from the applicator head under the nail to lift it from the underlying skin after a foot soak.[10] 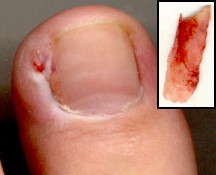 A number of types of surgery may be carried out including a wedge resection and the Vandenbos procedure.[11]

This is typically an in-office procedure requiring local anesthesia and special surgical instruments. The surgical approach is the removal of the offending part of the nail plate known as a wedge resection.[9] If the ingrown toenail recurs despite this treatment, destruction of the sides of the nail with chemicals or excision is done; this is known as a matrixcestomy.[9] Antibiotics may be used after the procedure but are not recommended, as they may delay healing.[9] Surgical treatment for ingrown nails is more effective at preventing the nail from regrowing inwards compared to non-surgical treatments.[12]

A less widely used treatment for ingrown toenails is nail bracing. Nail braces work by gently lifting the sides of the toenail and eventually retraining the nail to grow to a flatter shape over time. The total time needed for the nail to be reshaped is one full nail growth or about 18 months.[13] There are two main types of nail braces: adhesive and hooked. Adhesive nail braces are generally made of a thin strip of composite material that is glued to the top of the nail. The strip naturally tries to return to a flat state and lifts the edges of the nails in the process. Hooked nail braces consist of a hook (usually made of dental wire) placed under either side of the nail with some type of tensioning system pulling the hooks together.

Because of the curved shape of the nail, the tensioning device rests on the higher middle of the nail by applying upward pressure to the sides of the nail. In studies of diabetics, who need to avoid surgery when possible, nail bracing was found to be effective at providing immediate, as well as long-term, relief.[14]

The word "onychocryptosis" is from Greek: ὄνυξ (onyx, "nail") and κρυπτός (kryptos, "hidden").