Carcinoid syndrome is a paraneoplastic syndrome comprising the signs and symptoms that occur secondary to carcinoid tumors. The syndrome includes flushing and diarrhea, and less frequently, heart failure, vomiting and bronchoconstriction.[3] It is caused by endogenous secretion of mainly serotonin and kallikrein. 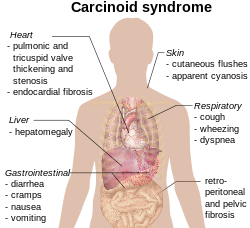 Presentation of the carcinoid syndrome.[4]

The carcinoid syndrome occurs in approximately 5% of carcinoid tumors[5] and becomes manifest when vasoactive substances from the tumors enter the systemic circulation escaping hepatic degradation. If the primary tumor is from the gastrointestinal tract (hence releasing serotonin into the hepatic portal circulation), carcinoid syndrome generally does not occur until the disease is so advanced that it overwhelms the liver's ability to metabolize the released serotonin.[citation needed]

Carcinoid tumors produce several vasoactive substances, most prominently serotonin. It is commonly thought that serotonin is the cause of the flushing, but this is only partially correct.[7] The flushing also results from secretion of kallikrein, the enzyme that catalyzes the conversion of kininogen to lysyl-bradykinin. The latter is further converted to bradykinin, one of the most powerful vasodilators known.

Other components of the carcinoid syndrome are diarrhea (probably caused by the increased serotonin, which greatly increases peristalsis, leaving less time for fluid absorption), a pellagra-like syndrome (probably caused by diversion of large amounts of tryptophan from synthesis of the vitamin B3 niacin, which is needed for NAD production, to the synthesis of serotonin and other 5-hydroxyindoles), fibrotic lesions of the endocardium, particularly on the right side of the heart resulting in insufficiency of the tricuspid valve and, less frequently, the pulmonary valve and, uncommonly, bronchoconstriction.[medical citation needed]

The pathogenesis of the cardiac lesions and the bronchoconstriction is unknown, but the former probably involves activation of serotonin 5-HT2B receptors by serotonin. When the primary tumor is in the gastrointestinal tract, as it is in the great majority of cases, the serotonin and kallikrein are inactivated in the liver; manifestations of carcinoid syndrome do not occur until there are metastases to the liver or when the cancer is accompanied by liver failure (cirrhosis). Carcinoid tumors arising in the bronchi may be associated with manifestations of carcinoid syndrome without liver metastases because their biologically active products reach the systemic circulation before passing through the liver and being metabolized.[medical citation needed]

In most patients, there is an increased urinary excretion of 5-HIAA (5-hydroxyindoleacetic acid), a degradation product of serotonin.[medical citation needed]

With a certain degree of clinical suspicion, the most useful initial test is the 24-hour urine levels of 5-HIAA (5-hydroxyindoleacetic acid), the end product of serotonin metabolism.[citation needed] Patients with carcinoid syndrome usually excrete more than 25 mg of 5-HIAA per day.

For localization of both primary lesions and metastasis, the initial imaging method is Octreoscan, where indium-111 labelled somatostatin analogues (octreotide) are used in scintigraphy for detecting tumors expressing somatostatin receptors.[citation needed] Median detection rates with octreoscan are about 89%, in contrast to other imaging techniques such as CT scan and MRI with detection rates of about 80%. Gallium-68 labelled somatostatin analogues such as 68Ga-DOTA-Octreotate (DOTATATE), performed on a PET/CT scanner is superior to conventional Octreoscan.

Usually, on a CT scan, a spider-like/crab-like change is visible in the mesentery due to the fibrosis from the release of serotonin. 18F-FDG PET/CT, which evaluate for increased metabolism of glucose, may also aid in localizing the carcinoid lesion or evaluating for metastases. Chromogranin A and platelets serotonin are increased.[clarification needed] 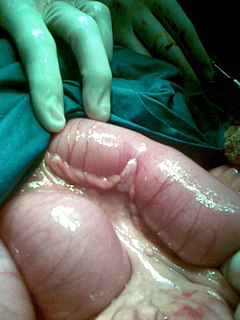 Primary site of a carcinoid cancer of gut; secondaries are also visible on the mesentery

Disease progression is difficult to ascertain because the disease can metastasize anywhere in the body and can be too small to identify with any current technology. Markers of the condition such as chromogranin-A are imperfect indicators of disease progression.[11]