Histoplasmosis is a fungal infection caused by Histoplasma capsulatum.[3][4] Symptoms range widely, but the disease affects primarily the lungs.[5] Occasionally, other organs are affected; called disseminated histoplasmosis, it can be fatal if left untreated.[citation needed]

Histoplasma capsulatum is found in soil, often associated with decaying bat guano or bird droppings. Disruption of soil from excavation or construction can release infectious elements that are inhaled and settle into the lung.[citation needed] Histoplasmosis is common among AIDS patients because of their suppressed immunity.[6] In immunocompetent individuals, past infection results in partial protection against ill effects if reinfected.[citation needed]

Diagnosis is confirmed by isolating the fungus from a specimen, such as sputum, bone marrow, bronchial washings, cerebrospinal fluid and sometimes blood, but can take up to 8 weeks and requires a biosafe laboratory.[7] Early diagnosis using in vitro diagnostics, particularly in people with HIV in Latin America, is recommended and can be done using a urine Histoplasma antigen test.[7][8] Other tests include serological tests and PCR.[7] Histoplasmosis mimics colds, pneumonia, and the flu, and can be shed by bats in their feces.

Between 2001 and 2012, histoplasmosis admissions to hospital in North America almost doubled.[9] From 1938 to 2013 in the US, 105 outbreaks were reported in 26 states and Puerto Rico. In 1978-1979 during a large urban outbreak in which 100,000 people were exposed to the fungus in Indianapolis,[10] victims had pericarditis, rheumatological syndromes, esophageal and vocal cord ulcers, parotitis, adrenal insufficiency, uveitis, fibrosing mediastinitis, interstitial nephritis, intestinal lymphangiectasia, and epididymitis.

Skin lesion on the upper lip due to H. capsulatum infection

If symptoms of histoplasmosis infection occur, they start within 3 to 17 days after exposure; the typical time is 12–14 days. Most affected individuals have clinically silent manifestations and show no apparent ill effects. The acute phase of histoplasmosis is characterized by nonspecific respiratory symptoms, often cough or flu-like. Chest X-ray findings are normal in 40–70% of cases.[11] Chronic histoplasmosis cases can resemble tuberculosis;[12][13] disseminated histoplasmosis affects multiple organ systems and is fatal unless treated.[14]

While histoplasmosis is the most common cause of mediastinitis, this remains a relatively rare disease. Severe infections can cause hepatosplenomegaly, lymphadenopathy, and adrenal enlargement.[5] Lesions have a tendency to calcify as they heal.[citation needed]

Presumed ocular histoplasmosis syndrome causes chorioretinitis, where the choroid and retina of the eyes are scarred, resulting in a loss of vision not unlike macular degeneration. Despite its name, the relationship to Histoplasma is controversial.[15][16] Distinct from POHS, acute ocular histoplasmosis may rarely occur in immunodeficiency.[17][18]

After healing of lesions, hard, calcified lymph nodes can erode the walls of the airway, causing hemoptysis.[citation needed]

H. capsulatum grows in soil and material contaminated with bird or bat droppings (guano). The fungus has been found in poultry-house litter, caves, areas harboring bats, and bird roosts (particularly those of starlings). The fungus is thermally dimorphic; in the environment, it grows as a brownish mycelium, and at body temperature (37°C in humans), it morphs into a yeast. Histoplasmosis is not contagious, but is contracted by inhalation of the spores from disturbed soil or guano.[5] The inoculum is represented principally by microconidia. These are inhaled and reach the alveoli. In the alveoli, macrophages ingest these microconidia. They survive inside the phagosome. As the fungus is thermally dimorphic, these microconidia are transformed into yeast. They grow and multiply inside the phagosome. The macrophages travel in lymphatic circulation and can spread the disease to different organs.[citation needed]

Within the phagosome, the fungus has an absolute requirement for thiamine.[19] Cell-mediated immunity for histoplasmosis develops within 2 weeks. If the patient has strong cellular immunity, macrophages, epithelial cells, and lymphocytes surround the organisms and contain them, and eventually calcify. In immunocompromised individuals, the organisms disseminate to different organs such as bone, spleen, liver, adrenal glands, and mucocutaneous membranes, resulting in progressive disseminated histoplasmosis. Chronic lung disease can manifest.[citation needed] 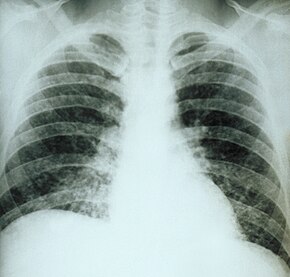 Chest X-ray of a patient with acute pulmonary histoplasmosis

Clinically, a wide spectrum of disease manifestations occurs, making diagnosis somewhat difficult. More severe forms include the chronic pulmonary form, often occurring in the presence of underlying pulmonary disease, and a disseminated form, which is characterized by the progressive spread of infection to extrapulmonary sites. Oral manifestations have been reported as the main complaint of the disseminated forms, leading the patient to seek treatment, whereas pulmonary symptoms in disseminated disease may be mild or even misinterpreted as flu.[20] Histoplasmosis can be diagnosed by samples containing the fungus taken from sputum (via bronchoalveolar lavage), blood, or infected organs. It can also be diagnosed by detection of antigens in blood or urine samples by ELISA or polymerase chain reaction. Antigens can cross-react with antigens of African histoplasmosis (caused by Histoplasma duboisii), blastomycosis, coccidioidomycosis, paracoccidioidomycosis, and talaromycosis infection.

Histoplasmosis can also be diagnosed by a test for antibodies against Histoplasma in the blood. [21]

Histoplasma skin tests indicate whether persons have been exposed, but do not indicate whether they have the disease.[5] Formal histoplasmosis diagnoses are often confirmed only by culturing the fungus directly.[6] Sabouraud agar is one agar growth medium on which the fungus can be cultured. Cutaneous manifestations of disseminated disease are diverse and often present as a nondescript rash with systemic complaints. Diagnosis is best established by urine antigen testing, as blood cultures may take up to 6 weeks for diagnostic growth to occur and serum antigen testing often comes back with a false negative before 4 weeks of disseminated infection.[22]

Testing or decontaminating most sites that may be contaminated with H. capsulatum is impractical, but the sources below list environments where histoplasmosis is common, and precautions to reduce a person's risk of exposure, in the three parts of the world where the disease is prevalent. Precautions common to all geographical locations would be to avoid accumulations of bird or bat droppings.[citation needed]

The US National Institute for Occupational Safety and Health provides information on work practices and personal protective equipment that may reduce the risk of infection.[24] This document is available in English and Spanish.[citation needed]

A review paper includes information on locations in which Histoplasmosis has been found in Africa (in chicken runs, on bats, in the caves bats infest, and in soil), and a thorough reference list including English, French, and Spanish language references.[25]

In the majority of immunocompetent individuals, histoplasmosis resolves without any treatment. Antifungal medications are used to treat severe cases of acute histoplasmosis and all cases of chronic and disseminated disease. Typical treatment of severe disease first involves treatment with amphotericin B, followed by oral itraconazole.[26][27]

Treatment with itraconazole must continue for at least a year in severe cases,[30] while in acute pulmonary Histoplasmosis, 6 to 12 weeks treatment is sufficient. Alternatives to itraconazole are posaconazole, voriconazole, and fluconazole. Individuals taking itraconazole are monitored for hepatic function.

About 90% of patients with normal immune systems regain health without any intervention. Less than 5% need serious treatments.[citation needed]

H. capsulatum is found throughout the world. It is endemic in certain areas of the United States, particularly in states bordering the Ohio River valley and the lower Mississippi River. The humidity and acidity patterns of soil are associated with endemicity. Bird and bat droppings in soil promote growth of Histoplasma. Contact with such soil aerosolizes the microconidia, which can infect humans. It is also common in caves in Southern and East Africa. Positive Histoplasmin skin tests occur in as many as 90% of the people living in areas where H. capsulatum is common, such as the eastern and central United States.[5]