From WikiProjectMed
(Redirected from Acne rosacea)
Jump to navigation Jump to search
For other uses, see Rosacea (disambiguation).

Rosacea is a long-term skin condition that typically affects the face.[2][3] It results in redness, pimples, swelling, and small and superficial dilated blood vessels.[2] Often, the nose, cheeks, forehead, and chin are most involved.[3] A red, enlarged nose may occur in severe disease, a condition known as rhinophyma.[3]

The cause of rosacea is unknown.[2] Risk factors are believed to include a family history of the condition.[3] Factors that may potentially worsen the condition include heat, exercise, sunlight, cold, spicy food, alcohol, menopause, psychological stress, or steroid cream on the face.[3] Diagnosis is based on symptoms.[2]

While not curable, treatment usually improves symptoms.[3] Treatment is typically with metronidazole, doxycycline, minocycline, or tetracycline.[4] When the eyes are affected, azithromycin eye drops may help.[5] Other treatments with tentative benefit include brimonidine cream, ivermectin cream, and isotretinoin.[4] Dermabrasion or laser surgery may also be used.[3] The use of sunscreen is typically recommended.[3]

Rosacea affects between 1 and 10% of people.[2] Those affected are most often 30 to 50 years old and female.[2] Caucasians are more frequently affected.[2] The condition was described in The Canterbury Tales in the 1300s, and possibly as early as the 200s BC by Theocritus.[6][7]

In glandular rosacea, men with thick sebaceous skin predominate, a disease in which the papules are edematous, and the pustules are often 0.5 to 1.0 cm in size, with nodulocystic lesions often present.[9]

The exact cause of rosacea is unknown.[2] Triggers that cause episodes of flushing and blushing play a part in its development. Exposure to temperature extremes, strenuous exercise, heat from sunlight, severe sunburn, stress, anxiety, cold wind, and moving to a warm or hot environment from a cold one, such as heated shops and offices during the winter, can each cause the face to become flushed.[2] Certain foods and drinks can also trigger flushing, such as alcohol, foods and beverages containing caffeine (especially hot tea and coffee), foods high in histamines, and spicy foods.[10]

Medications and topical irritants have also been known to trigger rosacea flares. Some acne and wrinkle treatments reported to cause rosacea include microdermabrasion and chemical peels, as well as high dosages of isotretinoin, benzoyl peroxide, and tretinoin.

Steroid-induced rosacea is caused by the use of topical steroids.[11] These steroids are often prescribed for seborrheic dermatitis. Dosage should be slowly decreased and not immediately stopped to avoid a flare-up.

In 2007, Richard Gallo and colleagues noticed that patients with rosacea had high levels of the antimicrobial peptide cathelicidin[12] and elevated levels of stratum corneum tryptic enzymes (SCTEs). Antibiotics have been used in the past to treat rosacea, but they may only work because they inhibit some SCTEs.[12]

Studies of rosacea and Demodex mites have revealed that some people with rosacea have increased numbers of the mite,[10] especially those with steroid-induced rosacea. On other occasions, demodicidosis (commonly known as "mange") is a separate condition that may have "rosacea-like" appearances.[13]

A 2007, National Rosacea Society-funded study demonstrated that Demodex folliculorum mites may be a cause or exacerbating factor in rosacea.[14] The researchers identified Bacillus oleronius as distinct bacteria associated with Demodex mites. When analyzing blood samples using a peripheral blood mononuclear cell proliferation assay, they discovered that B. oleronius stimulated an immune system response in 79 percent of 22 patients with subtype 2 (papulopustular) rosacea, compared with only 29% of 17 subjects without the disorder. They concluded, "The immune response results in inflammation, as evident in the papules (bumps) and pustules (pimples) of subtype 2 rosacea. This suggests that the B. oleronius bacteria found in the mites could be responsible for the inflammation associated with the condition."[14]

Most people with rosacea have only mild redness and are never formally diagnosed or treated. No test for rosacea is known. In many cases, simple visual inspection by a trained health-care professional is sufficient for diagnosis. In other cases, particularly when pimples or redness on less-common parts of the face is present, a trial of common treatments is useful for confirming a suspected diagnosis. The disorder can be confused or co-exist with acne vulgaris or seborrheic dermatitis. The presence of a rash on the scalp or ears suggests a different or co-existing diagnosis because rosacea is primarily a facial diagnosis, although it may occasionally appear in these other areas. 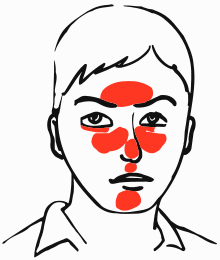 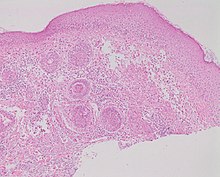 Treatment of depends on the types present.[24] Mild cases are often not treated at all, or are simply covered up with normal cosmetics.

Therapy for the treatment of rosacea is not curative, and is best measured in terms of reduction in the amount of facial redness and inflammatory lesions, a decrease in the number, duration, and intensity of flares, and concomitant symptoms of itching, burning, and tenderness. The two primary modalities of rosacea treatment are topical and oral antibiotic agents.[25] Laser therapy has also been classified as a form of treatment.[25] While medications often produce a temporary remission of redness within a few weeks, the redness typically returns shortly after treatment is suspended. Long-term treatment, usually 1–2 years, may result in permanent control of the condition for some patients.[25][26] Lifelong treatment is often necessary, although some cases resolve after a while and go into a permanent remission.[26] Other cases, if left untreated, worsen over time.[citation needed]

Avoiding triggers that worsen the condition can help reduce the onset of rosacea, but alone will not normally lead to remission except in mild cases. Keeping a journal is sometimes recommended to help identify and reduce food and beverage triggers.

Because sunlight is a common trigger, avoiding excessive exposure to the sun is widely recommended. Some people with rosacea benefit from daily use of a sunscreen; others opt for wearing hats with broad brims. Like sunlight, emotional stress can also trigger rosacea. People who develop infections of the eyelids must practice frequent eyelid hygiene.

Medications with good evidence include topical ivermectin and azelaic acid creams and brimonidine, and doxycycline and isotretinoin by mouth.[28] Lesser evidence supports topical metronidazole cream and tetracycline by mouth.[28]

Using alpha-hydroxy acid peels may help relieve redness caused by irritation, and reduce papules and pustules associated with rosacea.[29] Oral antibiotics may help to relieve symptoms of ocular rosacea. If papules and pustules persist, then sometimes isotretinoin can be prescribed.[30] The flushing and blushing that typically accompany rosacea are typically treated with the topical application of alpha agonists such as brimonidine and less commonly oxymetazoline or xylometazoline.[10]

Evidence for the use of laser and intense pulsed-light therapy in rosacea is poor.[31]