From WikiProjectMed
Jump to navigation Jump to search
For other uses, see Wart (disambiguation).

Warts are typically small, rough, hard growths that are similar in color to the rest of the skin.[1][3] They typically do not result in other symptoms, except when on the bottom of the feet, where they may be painful.[3] While they usually occur on the hands and feet, they can also affect other locations.[1] One or many warts may appear.[3] They are not cancerous.[3]

Warts are caused by infection with a type of human papillomavirus (HPV).[1] Factors that increase the risk include use of public showers, working with meat, eczema and a weak immune system.[1][3] The virus is believed to enter the body through skin that has been damaged slightly.[1] A number of types exist, including "common warts", plantar warts, "filiform warts", and genital warts.[3] Genital warts are often sexually transmitted.[5]

Without treatment, most types of warts resolve in months to years.[1] A number of treatments may speed resolution including salicylic acid applied to the skin and cryotherapy.[1] In those who are otherwise healthy, they do not typically result in significant problems.[1] Treatment of genital warts differs from that of other types.[3]

Warts are very common, with most people being infected at some point in their lives.[2] The estimated current rate of non-genital warts among the general population is 1–13%.[1] They are more common among young people.[1] The estimated rate of genital warts in sexually active women is 12%.[5] Warts have been described at least as far back as 400 BC by Hippocrates.[4] 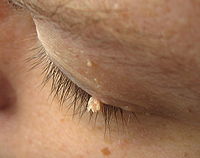 A filiform wart on the eyelid.

A range of types of wart have been identified, varying in shape and site affected, as well as the type of human papillomavirus involved.[6][7] These include:

Warts are caused by the human papilloma virus (HPV). There are about 130 known types of human papilloma viruses.[8] HPV infects the squamous epithelium, usually of the skin or genitals, but each HPV type is typically only able to infect a few specific areas on the body. Many HPV types can produce a benign growth, often called a "wart" or "papilloma", in the area they infect. Many of the more common HPV and wart types are listed below.

On dermatoscopic examination warts will commonly have fingerlike or knoblike extensions.[14]

HPV vaccines do not currently protect against the virus strains responsible for plantar warts (verrucae).

The virus is relatively hardy and immune to many common disinfectants. Exposure to 90% ethanol for at least 1 minute, 2% glutaraldehyde, 30% Savlon, and/or 1% sodium hypochlorite can disinfect the pathogen.[17]

Two viral warts on a middle finger, being treated with a mixture of acids (like salicylic acid) to remove them. A white precipitate forms on the area where the product was applied. 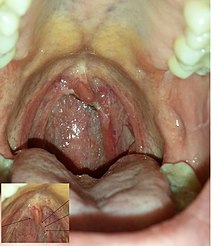 Throat warts before and after carbon dioxide laser treatment.

Another product available over-the-counter that can aid in wart removal is silver nitrate in the form of a caustic pencil, which is also available at drug stores. In a placebo-controlled study of 70 patients, silver nitrate given over nine days resulted in clearance of all warts in 43% and improvement in warts in 26% one month after treatment compared to 11% and 14%, respectively, in the placebo group.[25] The instructions must be followed to minimize staining of skin and clothing. Occasionally pigmented scars may develop. 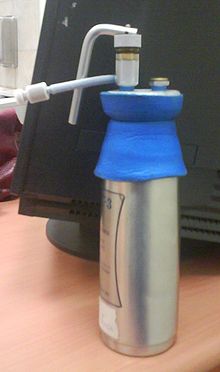 Daily application of the latex of Chelidonium majus is a traditional treatment.[35]

Despite their appearance, toads do not cause warts

According to English folk belief, touching toads causes warts; according to a German belief, touching a toad under a full moon cures warts.[36] The most common Northern Hemisphere toads have glands that protrude from their skin that superficially resemble warts. Warts are caused by a virus, and toads do not harbor it.[37] A variety of traditional folk remedies and rituals claim to be able to remove warts.

The acrid yellow sap of Greater Celandine is used as a traditional wart remedy.[38] The sap can be applied directly to the wart in a similar manner to concentrated salicylic acid solution, but in more modest quantities.

In The Adventures of Tom Sawyer, Mark Twain has his characters discuss a variety of such remedies. Tom Sawyer proposes "spunk-water" (or "stump-water", the water collecting in the hollow of a tree stump) as a remedy for warts on the hand. You put your hand into the water at midnight and say:

You then "walk away quick, eleven steps, with your eyes shut, and then turn around three times and walk home without speaking to anybody. Because if you speak the charm's busted." This is held to be superior to Huckleberry Finn's preferred remedy which involved throwing a dead cat into a graveyard. Another remedy involved splitting a bean, drawing blood from the wart and putting it on one of the halves, and burying that half at a crossroads at midnight. The theory of operation is that the blood on the buried bean will draw away the wart.[39] Twain is recognized as an early collector and recorder of genuine American folklore.[40]

Similar practices are recorded elsewhere. In Louisiana, one remedy for warts involves rubbing the wart with a potato, which is then buried; when the "buried potato dries up, the wart will be cured".[41] Another remedy similar to Twain's is reported from Northern Ireland, where water from a specific well on Rathlin Island is credited with the power to cure warts.[42]