Alopecia areata, also known as spot baldness, is a condition in which hair is lost from some or all areas of the body.[1] Often it results in a few bald spots on the scalp, each about the size of a coin.[2] Psychological stress may result.[2] People are generally otherwise healthy.[2] In a few cases, all the hair on the scalp or all body hair is lost and loss can be permanent.[2][1]

Alopecia areata is believed to be an autoimmune disease resulting from a breach in the immune privilege of the hair follicles.[4] Risk factors include a family history of the condition.[2] Among identical twins, if one is affected, the other has about a 50% chance of also being affected.[2] The underlying mechanism involves failure by the body to recognize its own cells with subsequent immune mediated destruction of the hair follicle.[2]

No cure for the condition is known.[2] Efforts may be used to try to speed hair regrowth such as cortisone injections.[2][1] Sunscreen, head coverings to protect from cold and sun, and glasses if the eyelashes are missing are recommended.[2] In some cases, the hair regrows and the condition does not reoccur.[2] In others, hair loss and regrowth occurs over years.[2] Among those in whom all body hair is lost, less than 10% recover.[5] 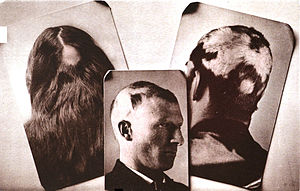 Typical first symptoms of alopecia areata are small bald patches. The underlying skin is unscarred and looks superficially normal. Although these patches can take many shapes, they are usually round or oval.[6] Alopecia areata most often affects the scalp and beard, but may occur on any part of the body with hair.[7] Different areas of the skin may exhibit hair loss and regrowth at the same time. The disease may also go into remission for a time, or may be permanent. It is common in children.[citation needed]

The area of hair loss may tingle or be painful.[8] The hair tends to fall out over a short period of time, with the loss commonly occurring more on one side of the scalp than the other.[9]

Exclamation point hairs, narrower along the length of the strand closer to the base, producing a characteristic "exclamation point" appearance, are often present.[9] These hairs are very short (3–4 mm), and can be seen surrounding the bald patches.[10]

When healthy hair is pulled out, at most a few should come out, and ripped hair should not be distributed evenly across the tugged portion of the scalp. In cases of alopecia areata, hair tends to pull out more easily along the edge of the patch where the follicles are already being attacked by the body's immune system than away from the patch where they are still healthy.[11]

Nails may have pitting or trachyonychia.[7]

In alopecia areata, a hair follicle is attacked by the immune system. T-cells swarm the roots, killing the follicle. This causes the hair to fall out and parts of the head to bald.

Alopecia areata is thought to be a systemic autoimmune disorder in which the body attacks its own anagen hair follicles and suppresses or stops hair growth.[9] For example, T cell lymphocytes cluster around affected follicles, causing inflammation and subsequent hair loss. Hair follicles in a normal state are thought to be kept secure from the immune system, a phenomenon called immune privilege. A breach in this immune privilege state is considered as the cause of alopecia areata.[4] A few cases of babies being born with congenital alopecia areata have been reported.[12]

Alopecia areata is not contagious.[9] It occurs more frequently in people who have affected family members, suggesting heredity may be a factor.[9] Strong evidence of genetic association with increased risk for alopecia areata was found by studying families with two or more affected members. This study identified at least four regions in the genome that are likely to contain these genes.[13] In addition, alopecia areata shares genetic risk factors with other autoimmune diseases, including rheumatoid arthritis, type 1 diabetes, and celiac disease.[3] It may be the only manifestation of celiac disease.[14][15]

Endogenous retinoids metabolic defect is a key part of the pathogenesis of the alopecia areata.[16]

In 2010, a genome-wide association study was completed that identified 129 single nucleotide polymorphisms that were associated with alopecia areata. The genes that were identified include those involved in controlling the activation and proliferation of regulatory T cells, cytotoxic T lymphocyte-associated antigen 4, interleukin-2, interleukin-2 receptor A, and Eos (also known as Ikaros family zinc finger 4), as well as the human leukocyte antigen. The study also identified two genes, PRDX5 and STX17, that are expressed in the hair follicle.[17]

Alopecia areata is usually diagnosed based on clinical features.

Oftentimes, however, discrete areas of hair loss surrounded by exclamation mark hairs is sufficient for clinical diagnosis of alopecia areata. Sometimes, reddening of the skin, erythema, may also be present in the balding area.[5]

A biopsy is rarely needed to make the diagnosis or aid in the management of alopecia areata. Histologic findings may include peribulbar lymphocytic infiltration resembling a "swarm of bees", a shift in the anagen-to-telogen ratio towards telogen, and dilated follicular infundibulae.[3] Other helpful findings can include pigment incontinence in the hair bulb and follicular stelae. Occasionally, in inactive alopecia areata, no inflammatory infiltrates are found.[citation needed]

Commonly, alopecia areata involves hair loss in one or more round spots on the scalp.[9][19]

The objective assessment of treatment efficacy is very difficult and spontaneous remission is unpredictable, but if the affected area is patched, the hair may regrow spontaneously in many cases.[21] None of the existing therapeutic options are curative or preventive.[21]

In cases of severe hair loss, limited success has been achieved by using the corticosteroid medications clobetasol or fluocinonide, corticosteroid injections, or cream. Application of corticosteroid creams to the affected skin is less effective and takes longer to produce results. Steroid injections are commonly used in sites where the areas of hair loss on the head are small or especially where eyebrow hair has been lost. Whether they are effective is uncertain.[citation needed] Some other medications that have been used are minoxidil, Elocon (mometasone) ointment (steroid cream), irritants (anthralin or topical coal tar), and topical immunotherapy ciclosporin, sometimes in different combinations. Topical corticosteroids frequently fail to enter the skin deeply enough to affect the hair bulbs, which are the treatment target,[7] and small lesions typically also regrow spontaneously. Oral corticosteroids may decrease the hair loss, but only for the period during which they are taken, and these medications can cause serious side effects.[7] No one treatment is effective in all cases, and some individuals may show no response to any treatment.[22] Few treatments have been well evaluated. A 2008 meta-analysis of oral and topical corticosteroids, topical ciclosporin, photodynamic therapy, and topical minoxidil showed no benefit of hair growth compared with placebo, especially with regard to long-term benefits.[23]

When alopecia areata is associated with celiac disease, treatment with a gluten-free diet allows for complete and permanent regrowth of scalp and other body hair in many people, but in others, remissions and recurrences are seen.[14] This improvement is probably due to the normalization of the immune response as a result of gluten withdrawal from the diet.[14]

No loss of body function occurs, and the effects of alopecia areata are psychological (loss of self-image due to hair loss), although these can be severe. Loss of hair also means the scalp burns more easily in the sun. Patients may also have aberrant nail formation because keratin forms both hair and nails.[citation needed]

Alopecia can be the cause of psychological stress. Because hair loss can lead to significant changes in appearance, individuals with it may experience social phobia, anxiety, and depression.[24]

The condition affects 0.1%–0.2% of the population,[25] and occurs equally in both males and females. Alopecia areata occurs in people who are otherwise healthy and have no other skin disorders.[7] Initial presentation most commonly occurs in the early childhood, late teenage years, or young adulthood, but can happen at any ages.[9] Patients also tend to have a slightly higher incidence of conditions related to the immune system, such as asthma, allergies, atopic dermatitis, and hypothyroidism.

In 2014, preliminary findings showing that oral ruxolitinib, a drug approved by the US Food and Drug Administration (FDA) for bone marrow disorder myelofibrosis, restored hair growth in three individuals with long-standing and severe disease.[27] The medicine costs almost US$10,000 a month.[28]

Alopecia areata and alopecia barbae have been identified by some as the biblical nethek condition that is part of the greater tzaraath family of skin disorders; the said disorders are purported to being discussed in the Book of Leviticus, chapter 13.[29]