A keloid is an areas of scaring which is firm, raised, and rubbery and larger than the original wound.[2] The color may be the same as the skin, red, or darker.[2] There may also be itching, burning, or pain.[2] They may not form until months after the initial injury.[4] These lesions are non cancerous.[2]

They occur due to a combination of genetic and environmental factors.[2] In those who are at risk, they can occur after any degree of injury to the skin.[2] The underlying mechanism involves abnormal wound healing.[2] Diagnosis is generally based on examination, though may be confirmed by biopsy.[2] It differs from a hypertrophic scar in that it grows beyond the site of the original wound.[2]

Treatment is difficult.[2] Efforts may include corticosteroids, cryotherapy, surgical excision, radiation therapy, and laser therapy.[2][3] Rates are 4.5 to 16% in people with darker skin.[2] People between the ages of 10 to 30 are more commonly affected.[4] 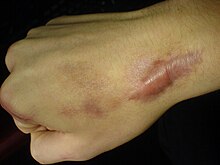 Postoperative keloid on the wrist

Keloids expand in claw-like growths over normal skin.[5] They have the capability to hurt with a needle-like pain or to itch, the degree of sensation varying from person to person.

Keloids form within scar tissue. Collagen, used in wound repair, tends to overgrow in this area, sometimes producing a lump many times larger than that of the original scar. They can also range in color from pink to red.[6] Although they usually occur at the site of an injury, keloids can also arise spontaneously. They can occur at the site of a piercing and even from something as simple as a pimple or scratch. They can occur as a result of severe acne or chickenpox scarring, infection at a wound site, repeated trauma to an area, excessive skin tension during wound closure or a foreign body in a wound. Keloids can sometimes be sensitive to chlorine. Keloid scars can grow, if they appear at a younger age, because the body is still growing.

Keloids can develop in any place where skin trauma has occurred. They can be the result of pimples, insect bites, scratching, burns, or other skin injury. Keloid scars can develop after surgery. They are more common in some sites, such as the central chest (from a sternotomy), the back and shoulders (usually resulting from acne), and the ear lobes (from ear piercings). They can also occur on body piercings. The most common spots are earlobes, arms, pelvic region, and over the collar bone.

According to the (US) National Center for Biotechnology Information, keloid scarring is common in young people between the ages of 10 and 20. Studies have shown that those with darker complexions are at a higher risk of keloid scarring as a result of skin trauma. They occur in 15 – 20% of individuals with sub-Saharan African, Asian or Latino ancestry, significantly less in those of a Caucasian background and there are no reported cases in patients with albinism.[7] Keloids tend to have a genetic component, which means one is more likely to have keloids if one or both of their parents has them. However, no single gene has yet been identified which is a causing factor in keloid scarring but several susceptibility loci have been discovered, most notably in Chromosome 15.[7]

Most people, especially sub-saharan Africans and African Americans, have a positive family history of keloid disorder. Development of keloids among twins also lends credibility to existence of a genetic susceptibility to develop keloids. Marneros et al. (1) reported four sets of identical twins with keloids; Ramakrishnan et al.[8] also described a pair of twins who developed keloids at the same time after vaccination. Case series have reported clinically severe forms of keloids in individuals with a positive family history and black African ethnic origin. 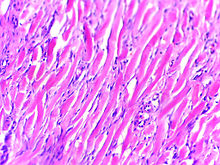 Histologically, keloids are fibrotic tumors characterized by a collection of atypical fibroblasts with excessive deposition of extracellular matrix components, especially collagen, fibronectin, elastin, and proteoglycans. Generally, they contain relatively acellular centers and thick, abundant collagen bundles that form nodules in the deep dermal portion of the lesion. Keloids present a therapeutic challenge that must be addressed, as these lesions can cause significant pain, pruritus (itching), and physical disfigurement. They may not improve in appearance over time and can limit mobility if located over a joint.

Keloids affect both sexes equally, although the incidence in young female patients has been reported to be higher than in young males, probably reflecting the greater frequency of earlobe piercing among women. The frequency of occurrence is 15 times higher in highly pigmented people. People of African descent have increased risk of keloid occurrences.[9]

Prevention of keloid scars in patients with a known predisposition to them includes preventing unnecessary trauma or surgery (such as ear piercing and elective mole removal) whenever possible. Any skin problems in predisposed individuals (e.g., acne, infections) should be treated as early as possible to minimize areas of inflammation.

Treatments (both preventive and therapeutic) available are pressure therapy, silicone gel sheeting, intra-lesional triamcinolone acetonide (TAC), cryosurgery (freezing), radiation, laser therapy (PDL), IFN, 5-FU and surgical excision as well as a multitude of extracts and topical agents.[10] Note that treatment of a keloid scar is age dependent: radiotherapy, anti-metabolites and corticosteroids would not be recommended to be used in children, in order to avoid harmful side effects, like growth abnormalities.[11]

In adults, corticosteroids combined with 5-FU and PDL in a triple therapy, enhance results and diminish side effects.[11]

Cryotherapy (or cryosurgery) refers to the application of extreme cold to treat keloids. This treatment method is easy to perform, effective and safe and has the least chance of recurrence.[12][13]

Surgical excision is currently still the most common treatment for a significant amount of keloid lesions. However, when used as the solitary form of treatment there is a large recurrence rate of between 70 and 100%. It has also been known to cause a larger lesion formation on recurrence. While not always successful alone, surgical excision when combined with other therapies dramatically decreases the recurrence rate. Examples of these therapies include but are not limited to radiation therapy, pressure therapy and laser ablation. Pressure therapy following surgical excision has shown promising results, especially in keloids of the ear and earlobe. The mechanism of how exactly pressure therapy works is unknown at present but many patients with keloid scars and lesions have benefited from it.[7]

Intralesional injection with a corticosteroid such as Kenalog (triamcinolone acetonide) does appear to aid in the reduction of fibroblast activity, inflammation and pruritus.[14]

Tea tree oil, salt or other topical oil have no effect on keloid lesions.[15]

Persons of any age can develop a keloid. Children under 10 are less likely to develop keloids, even from ear piercing. Keloids may also develop from Pseudofolliculitis barbae; continued shaving when one has razor bumps will cause irritation to the bumps, infection, and over time keloids will form. Persons with razor bumps are advised to stop shaving in order for the skin to repair itself before undertaking any form of hair removal. The tendency to form keloids is speculated to be hereditary.[16] Keloids can tend to appear to grow over time without even piercing the skin, almost acting out a slow tumorous growth; the reason for this tendency is unknown.

Extensive burns, either thermal or radiological, can lead to unusually large keloids; these are especially common in firebombing casualties, and were a signature effect of the atomic bombings of Hiroshima and Nagasaki.

True incidence and prevalence of keloid in United States is not known. Indeed, there has never been a population study to assess the epidemiology of this disorder. In his 2001 publication, Marneros[17] stated that “reported incidence of keloids in the general population ranges from a high of 16% among the adults in Zaire to a low of 0.09% in England,” quoting from Bloom’s 1956 publication on heredity of keloids.[18] Clinical observations show that the disorder is more common among sub-Saharan Africans, African Americans and Asians, with unreliable and very wide estimated prevalence rates ranging from 4.5-16%.[19][20]

Keloids were described by Egyptian surgeons around 1700 BC, recorded in the Smith papyrus, regarding surgical techniques.[citation needed] Baron Jean-Louis Alibert (1768–1837) identified the keloid as an entity in 1806.[citation needed] He called them cancroïde, later changing the name to chéloïde to avoid confusion with cancer. The word is derived from the Greek χηλή, chele, meaning "hoof", here in the sense of "crab pincers", and the suffix -oid, meaning "like".