From WikiProjectMed
Jump to navigation Jump to search
Not to be confused with Ampicillin.
AntibioticTemplate:SHORTDESC:Antibiotic

Amoxicillin is an antibiotic used to treat a number of bacterial infections.[4] These include middle ear infection, strep throat, pneumonia, skin infections, and urinary tract infections among others.[4] It is taken by mouth, or less commonly by injection.[4][5]

Common adverse effects include nausea and rash.[4] It may also increase the risk of yeast infections and, when used in combination with clavulanic acid, diarrhea.[6] It should not be used in those who are allergic to penicillin.[4] While usable in those with kidney problems, the dose may need to be decreased.[4] Its use in pregnancy and breastfeeding does not appear to be harmful.[4] Amoxicillin is in the beta-lactam family of antibiotics.[4]

Amoxicillin was discovered in 1958 and came into medical use in 1972.[7][8] It is on the World Health Organization's List of Essential Medicines.[9] It is one of the most commonly prescribed antibiotics in children.[10] Amoxicillin is available as a generic medication and is relatively inexpensive.[4][11] In 2017, it was the 18th most commonly prescribed medication in the United States, with more than 27 million prescriptions.[12][13] 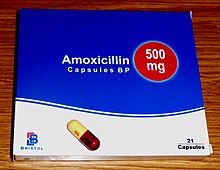 Amoxicillin and amoxicillin-clavulanate have been recommended by guidelines as the drug of choice for bacterial sinusitis and other respiratory infections.[14] Most sinusitis infections are caused by viruses, for which amoxicillin and amoxicillin-clavulanate are ineffective,[17] and the small benefit gained by amoxicillin may be overridden by the adverse effects.[18] Amoxicillin is recommended as the preferred first-line treatment for community-acquired pneumonia in adults by the National Institute for Health and Care Excellence, either alone (mild to moderate severity disease) or in combination with a macrolide.[19] The World Health Organization (WHO) recommends amoxicillin as first-line treatment for pneumonia that is not "severe".[20] Amoxicillin is used in post-exposure inhalation of anthrax to prevent disease progression and for prophylaxis.[14]

It is effective as one part of a multi-drug regimen for treatment of stomach infections of Helicobacter pylori. It is typically combined with a proton-pump inhibitor (such as omeprazole) and a macrolide antibiotic (such as clarithromycin); other drug combinations are also effective.[22]

Amoxicillin is effective for treatment of early cutaneous Lyme borreliosis; the effectiveness and safety of oral amoxicillin is neither better nor worse than common alternatively-used antibiotics.[23]

Amoxicillin is occasionally used for the treatment of skin infections,[14] such as acne vulgaris.[24] It is often an effective treatment for cases of acne vulgaris that have responded poorly to other antibiotics, such as doxycycline and minocycline.[25]

It is also used to prevent bacterial endocarditis in high-risk people having dental work done, to prevent Streptococcus pneumoniae and other encapsulated bacterial infections in those without spleens, such as people with sickle-cell disease, and for both the prevention and the treatment of anthrax.[4] The United Kingdom recommends against its use for infectious endocarditis prophylaxis.[26] These recommendations do not appear to have changed the rates of infection for infectious endocarditis.[27]

Amoxicillin is susceptible to degradation by β-lactamase-producing bacteria, which are resistant to most β-lactam antibiotics, such as penicillin. For this reason, it may be combined with clavulanic acid, a β-lactamase inhibitor. This drug combination is commonly called co-amoxiclav.[28]

It is a moderate-spectrum, bacteriolytic, β-lactam antibiotic in the aminopenicillin family used to treat susceptible Gram-positive and Gram-negative bacteria. It is usually the drug of choice within the class because it is better-absorbed, following oral administration, than other β-lactam antibiotics. In general, Streptococcus, Bacillus subtilis, Enterococcus, Haemophilus, Helicobacter, and Moraxella are susceptible to amoxicillin, whereas Citrobacter, Klebsiella and Pseudomonas aeruginosa are resistant to it.[29] Some E. coli and most clinical strains of Staphylococcus aureus have developed resistance to amoxicillin to varying degrees.

The duration of treatment is 5 days for otitis media, 6 days for tonsillitis, and 7 to 10 days for pneumonia and sinusitis.[31]

Side effects are similar to those for other β-lactam antibiotics, including nausea, vomiting, rashes, and antibiotic-associated colitis. Loose bowel movements (diarrhea) may also occur. Rarer adverse effects include mental changes, lightheadedness, insomnia, confusion, anxiety, sensitivity to lights and sounds, and unclear thinking. Immediate medical care is required upon the first signs of these adverse effects.[citation needed]

The onset of an allergic reaction to amoxicillin can be very sudden and intense; emergency medical attention must be sought as quickly as possible. The initial phase of such a reaction often starts with a change in mental state, skin rash with intense itching (often beginning in fingertips and around groin area and rapidly spreading), and sensations of fever, nausea, and vomiting. Any other symptoms that seem even remotely suspicious must be taken very seriously. However, more mild allergy symptoms, such as a rash, can occur at any time during treatment, even up to a week after treatment has ceased. For some people allergic to amoxicillin, the adverse effects can be fatal due to anaphylaxis.

Use of the amoxicillin/clavulanic acid combination for more than one week has caused mild hepatitis in some patients. Young children having ingested acute overdoses of amoxicillin manifested lethargy, vomiting, and renal dysfunction.[32][33]

Between 3 and 10% of children taking amoxicillin (or ampicillin) show a late-developing (>72 hours after beginning medication and having never taken penicillin-like medication previously) rash, which is sometimes referred to as the "amoxicillin rash". The rash can also occur in adults.

The rash is described as maculopapular or morbilliform (measles-like; therefore, in medical literature, it is called "amoxicillin-induced morbilliform rash".[35]). It starts on the trunk and can spread from there. This rash is unlikely to be a true allergic reaction and is not a contraindication for future amoxicillin usage, nor should the current regimen necessarily be stopped. However, this common amoxicillin rash and a dangerous allergic reaction cannot easily be distinguished by inexperienced persons, so a healthcare professional is often required to distinguish between the two.[36][37]

A nonallergic amoxicillin rash may also be an indicator of infectious mononucleosis. Some studies indicate about 80-90% of patients with acute Epstein Barr virus infection treated with amoxicillin or ampicillin develop such a rash.[38]

Amoxicillin may interact with these drugs:

Amoxicillin (α-amino-p-hydroxybenzyl penicillin) is a semisynthetic derivative of penicillin with a structure similar to ampicillin but with better absorption when taken by mouth, thus yielding higher concentrations in blood and in urine.[41] Amoxicillin diffuses easily into tissues and body fluids. Penetration into the central nervous system increases in meningitis. It will cross the placenta and is excreted into breastmilk in small quantities. It is excreted into the urine and metabolized by the liver. It has an onset of 30 minutes and a half-life of 3.7 hours in newborns and 1.4 hours in adults.[14]

Amoxicillin attaches to the cell wall of susceptible bacteria and results in their death. It also is a bactericidal compound. It is effective against streptococci, pneumococci, enterococci, Haemophilus influenzae, Escherichia coli, Proteus mirabilis, Neisseria meningitidis, Neisseria gonorrhoeae, Shigella, Chlamydia trachomatis, Salmonella, Borrelia burgdorferi, and Helicobacter pylori.[14] As a derivative of ampicillin, amoxicillin is a member of the penicillin family and, like penicillins, is a β-lactam antibiotic.[42] It inhibits cross-linkage between the linear peptidoglycan polymer chains that make up a major component of the bacterial cell wall. It has two ionizable groups in the physiological range (the amino group in alpha-position to the amide carbonyl group and the carboxyl group).[43]

Pharmaceutical manufacturers make amoxicillin in trihydrate form, for oral use available as capsules, regular, chewable and dispersible tablets, syrup and pediatric suspension for oral use, and as the sodium salt for intravenous administration. Amoxicillin is most commonly taken orally. The liquid forms are helpful where the patient might find it difficult to take tablets or capsules.

Amoxicillin is one of the semisynthetic penicillins discovered by Beecham scientists. The patent for amoxicillin has expired, thus amoxicillin and co-amoxiclav preparations are marketed under various trade names across the world.[1]

Amoxicillin is also sometimes used as an antibiotic for animals. The use of amoxicillin for animals intended for human consumption (chickens, cattle, and swine for example) has been approved.[54]