Zoster vaccines, of which there are two types Shingrix and Zostavax, are vaccines that reduce the risk of herpes zoster (shingles) and postherpetic neuralgia, diseases caused by reactivation of the varicella zoster virus (VZV), which is also responsible for chickenpox.[1] Shingrix appears to prevent more cases of shingles than Zostavax, although side effects are more frequent and it requires two doses.[5][6] They are approved for use in people over 50 years old.[1] They are given by injection.[7][8]

Shingrix is a recombinant subunit vaccine.[5] Zostavax is an live attenuated vaccine which basically consists of a larger-than-normal dose of chickenpox vaccine.[1][9] Unlike Shingrix, Zostavax is not suitable for people with immunosuppression or who are pregnant.[1][10] The side effects of both vaccines are generally mild to moderate and can include pain at the site of injection, tiredness, and headache.[6][7][8]

Zoster vaccination is used to prevent shingles and its complications, including postherpetic neuralgia.[1][9] It can be considered a therapeutic vaccine, given that it is used to treat a latent virus that has remained dormant in cells since chicken pox infection earlier in life.[9] The two available zoster vaccines are intended for use in people over the age of 50.[1] Booster doses are not indicated for either vaccine, since there is little evidence of any significant reduction in immunity in the years following vaccination.[5][9]

The Advisory Committee on Immunization Practices (ACIP) in the United States recommends Shingrix for adults over the age of 50, including those who have already received Zostavax. The Committee voted that Shingrix is preferred over Zostavax for the prevention of zoster and related complications because data showed vaccine efficacy of more than 90% against shingles across all age groups, as well as sustained efficacy over a 4-year follow-up. Unlike Zostavax, which is given as a single shot, Shingrix is given as two intramuscular doses, two to six months apart.[14] 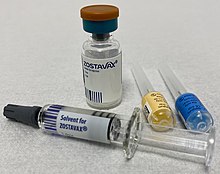 Zostavax is a live attenuated vaccine given in the UK to adults over the age of 70 to prevent shingles.[13] It is given by subcutaneous injection or intramuscular injection in the upper arm.[13] Due to a rare chance of transmitting the varicella-zoster virus to another person, if a rash appears within 6 weeks of the vaccine, the person should keep away from pregnant women and people with weakened immune systems.[13] It is not given to people who are immunocompromised.[13] It can be given on the same day as the MMR vaccine or with a 4 week interval.[13] As of 2020, Zostavax is no longer available in the United States.[10]

Zostavax is effective in preventing zoster for up to three years.[6] The duration of protection beyond four years after vaccination is unknown. The need for re-vaccination has not been defined.[medical citation needed]

Zostavax was shown to reduce the risk of shingles by 50% in those aged 60 and older. The vaccine also reduced by 67% the number of cases of postherpetic neuralgia (PHN) and reduced the severity and duration of pain and discomfort associated with shingles, by 61%.[16][17][18] The FDA originally recommended it for individuals 60 years of age or older who are not severely allergic to any of its components and who meet the following requirements:[19][20]

In 2006, the U.S. Advisory Committee on Immunization Practices (ACIP) recommended that the live vaccine be given to all adults age 60 and over, including those who have had a previous episode of shingles,[21] and those who do not recall having had chickenpox, since more than 99% of Americans ages 40 and older have had chickenpox.[22]

Temporary side effects from the Shingrix shots are likely, and can be severe enough in one out of six people to affect normal daily activities for up to three days.[23] Mild to moderate pain at the injection site is common, and some may have redness or swelling.[23] Side effects include fatigue, muscle pain, headache, shivering, fever, and nausea.[23] Symptoms usually resolve in two to three days.[23] Side effects with Shingrix are greater than those with Zostavax and occur more frequently in individuals aged 50 to 69 years compared with those 70 years and older.[5][24]

The live vaccine (Zostavax) is generally safe; one to a few percent of people develop a mild form of chickenpox, often with about five or six blisters around the injection site, and without fever. The blisters are harmless and temporary.[25][26] In one study 64% of the Zostavax group and 14% of the controls had some adverse reaction. However, the rates of serious adverse events were comparable between the Zostavax group (0.6%) and those receiving the placebo (0.5%).[27] A study including children with leukaemia found that the risk of getting shingles after vaccination is much lower than the risk of getting shingles for children with natural chicken pox in their history. Data from healthy children and adults point in the same direction.[25] Uncommon side effects include cough and sleepiness.[13] Rare side effects include conjunctivitis, Kawasaki disease, stroke, seizures, low platelets or vasculitis.[13]

Shingrix is a suspension for intramuscular injection consisting of a lyophilized recombinant varicella zoster virus (VZV) glycoprotein E (gE) antigen that is reconstituted at the time of use with AS01B suspension as an immunological adjuvant. The antigen is a purified truncated form of the glycoprotein, expressed in Chinese hamster ovary cells. The AS01B adjuvant suspension is composed of 3-O-desacyl-4'- monophosphoryl lipid A (MPL) from Salmonella (Minnesota strain) and a saponin molecule (QS-21) purified from Quillaja saponaria (soap bark tree) extract, combined in a liposomal formulation consisting of dioleoyl phosphatidylcholine (DOPC) and cholesterol in phosphate-buffered saline solution.[28]

The Zostavax vaccine contains live attenuated varicella-zoster virus.[25][10] The live vaccine is produced using the MRC-5 line of fetal cells.[18] This has raised religious and ethical concerns for some potential users, since that cell line was derived from an aborted fetus.[29]

The reasoning for vaccinating older adults against zoster stems from the observations of British general practitioner R. E. Hope-Simpson published in 1965 that the immunity conferred by natural chicken-pox in childhood waned with age.[30]

Shingrix was approved for medical use in the European Union in March 2018, with an indication for the prevention of herpes zoster (HZ) and post-herpetic neuralgia (PHN) in adults 50 years of age or older.[34]

From 2013, the UK National Health Service (NHS) started offering shingles vaccination to elderly people. People aged either 70 or 79 on 1 September 2013, were offered the vaccine. People aged 71 to 78 on that date would only have an opportunity to have the shingles vaccine after reaching the age of 79.[35] The original intention was for people aged between 70 and 79 to be vaccinated, but the NHS later said that the vaccination program was being staggered as it would be impractical to vaccinate everyone in their 70s in a single year.[36]

Zostavax was developed by Merck & Co. and approved and licensed by the U.S. Food and Drug Administration (FDA) in May 2006,[16] In 2011, the FDA approved the live vaccine for use in individuals 50 to 59 years of age.[18][37] Shingrix is a zoster vaccine developed by GlaxoSmithKline that was approved in the United States in October 2017.[38]

The U.S. Centers for Disease Control and Prevention (CDC) recommends that healthy adults 50 years and older get two doses of Shingrix, at least two months apart. Initial clinical trials only tested a gap of less than six months between doses, but unexpected popularity and resulting shortages caused further testing to validate wider spacing of the two doses.[40][41] Shingrix, which provides strong protection against shingles and PHN, is preferred over Zostavax.[42]

A 2007 study found that the live vaccine is likely to be cost-effective in the U.S., projecting an annual savings of US$82 to US$103 million in healthcare costs with cost-effectiveness ratios ranging from US$16,229 to US$27,609 per quality-adjusted life year gained.[44] In 2007, the live vaccine was officially recommended in the U.S. for healthy adults aged 60 and over.[45][46]