Cefotaxime is an antibiotic used to treat a number of bacterial infections.[5] Specifically it is used to treat joint infections, pelvic inflammatory disease, meningitis, pneumonia, urinary tract infections, sepsis, gonorrhea, and cellulitis.[5] It is given either by injection into a vein or muscle.[5]

Common side effects include nausea, allergic reactions, and inflammation at the site of injection.[5] Another side effect may include Clostridium difficile diarrhea.[5] It is not recommended in people who have had previous anaphylaxis to a penicillin.[5] It is relatively safe for use during pregnancy and breastfeeding.[5][6] It is in the third-generation cephalosporin family of medications and works by interfering with the bacteria's cell wall.[5]

It is a broad-spectrum antibiotic with activity against numerous gram-positive and gram-negative bacteria.

Given its broad spectrum of activity, cefotaxime is used for a variety of infections, including:

Although cefotaxime has demonstrated efficacy in these infections, it is not necessarily considered to be the first-line agent. In meningitis, cefotaxime crosses the blood–brain barrier better than cefuroxime. 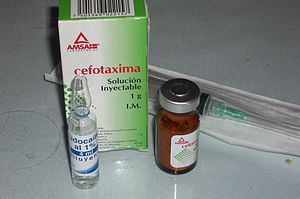 As a β-lactam antibiotic in the third-generation class of cephalosporins, cefotaxime is active against numerous Gram-positive and Gram-negative bacteria, including several with resistance to classic β-lactams such as penicillin. These bacteria often manifest as infections of the lower respiratory tract, skin, central nervous system, bone, and intra-abdominal cavity. While regional susceptibilities must always be considered, cefotaxime typically is effective against these organisms (in addition to many others):[11]

Notable organisms against which cefotaxime is not active include Pseudomonas and Enterococcus.[12] As listed, it has modest activity against the anaerobic Bacteroides fragilis.

Historically, cefotaxime has been considered to be comparable to ceftriaxone (another third-generation cephalosporin) in safety and efficacy for the treatment of bacterial meningitis, lower respiratory tract infections, skin and soft tissue infections, genitourinary tract infections, and bloodstream infections, as well as prophylaxis for abdominal surgery.[14][15][16] The majority of these infections are caused by organisms traditionally sensitive to both cephalosporins. However, ceftriaxone has the advantage of once-daily dosing, whereas the shorter half-life of cefotaxime necessitates two or three daily doses for efficacy. Changing patterns in microbial resistance suggest cefotaxime may be suffering greater resistance than ceftriaxone, whereas the two were previously considered comparable.[17] Considering regional microbial sensitivities is also important when choosing any antimicrobial agent for the treatment of infection.[citation needed]

Cefotaxime is contraindicated in people with a known hypersensitivity to cefotaxime or other cephalosporins. Caution should be used and risks weighed against potential benefits in patients with an allergy to penicillin, due to cross-reactivity between the classes.

The most common adverse reactions experienced are:

Unlike β-lactams such as penicillin and amoxicillin, which are highly susceptible to degradation by β-lactamase enzymes (produced, for example, nearly universally by S. aureus), cefotaxime boasts the additional benefit of resistance to β-lactamase degradation due to the structural configuration of the cefotaxime molecule. The syn-configuration of the methoxyimino moiety confers stability against β-lactamases.[18] Consequently, the spectrum of activity is broadened to include several β-lactamase-producing organisms (which would otherwise be resistant to β-lactam antibiotics), as outlined below.

Cefotaxime, like other β-lactam antibiotics, does not only block the division of bacteria, including cyanobacteria, but also the division of cyanelles, the photosynthetic organelles of the glaucophytes, and the division of chloroplasts of bryophytes. In contrast, it has no effect on the plastids of the highly developed vascular plants. This supports the endosymbiotic theory and indicates an evolution of plastid division in land plants.[19]

Cefotaxime is administered by intramuscular injection or intravenous infusion. As cefotaxime is metabolized to both active and inactive metabolites by the liver and largely excreted in the urine, dose adjustments may be appropriate in people with renal or hepatic impairment.[11][20][21]