From WikiProjectMed
Jump to navigation Jump to search
Not to be confused with Nephritic syndrome.

Nephrotic syndrome is a collection of symptoms due to kidney damage.[1] This includes protein in the urine, low blood albumin levels, high blood lipids, and significant swelling.[1] Other symptoms may include weight gain, feeling tired, and foamy urine.[1] Complications may include blood clots, infections, and high blood pressure.[1]

Causes include a number of kidney diseases such as focal segmental glomerulosclerosis, membranous nephropathy, and minimal change disease.[1][2] It may also occur as a complication of diabetes or lupus.[1] The underlying mechanism typically involves damage to the glomeruli of the kidney.[1] Diagnosis is typically based on urine testing and sometimes a kidney biopsy.[1] It differs from nephritic syndrome in that there are no red blood cells in the urine.[2]

Treatment is directed at the underlying cause.[1] Other efforts include managing high blood pressure, high blood cholesterol, and infection risk.[1] A low salt diet and limiting fluids is often recommended.[1] About 5 per 100,000 people are affected per year.[3][4] The usual underlying cause varies between children and adults.[4] 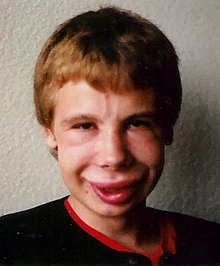 Nephrotic syndrome is usually accompanied by retention of water and sodium. The degree to which this occurs can vary between slight edema in the eyelids that decreases during the day, to affecting the lower limbs, to generalized swelling, to full blown anasarca.[5]

Nephrotic syndrome is characterized by large amounts of proteinuria (>3.5 g per 1.73 m2 body surface area per day,[6] or > 40 mg per square meter body surface area per hour in children), hypoalbuminemia (< 2.5 g/dl), hyperlipidaemia, and edema that begins in the face. Lipiduria (lipids in urine) can also occur, but is not essential for the diagnosis of nephrotic syndrome. Hyponatremia also occurs with a low fractional sodium excretion.

A few other characteristics seen in nephrotic syndrome are:

The main signs of nephrotic syndrome are:[9]

Nephrotic syndrome can be associated with a series of complications that can affect an individual's health and quality of life:[14] 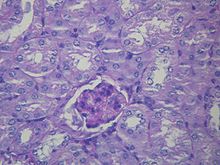 Histological image of a normal kidney glomerulus. It is possible to see a glomerulus in the centre of the image surrounded by kidney tubules.

Primary causes of nephrotic syndrome are usually described by their histology:[18]

They are considered to be "diagnoses of exclusion", i.e. they are diagnosed only after secondary causes have been excluded. 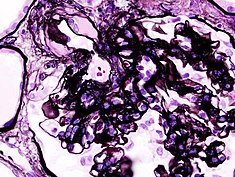 Diabetic glomerulonephritis in a person with nephrotic syndrome.

Secondary causes of nephrotic syndrome have the same histologic patterns as the primary causes, though they may exhibit some difference suggesting a secondary cause, such as inclusion bodies.[21] They are usually described by the underlying cause.

Over 50 mutations are known to be associated with this condition.[25]

Drawing of the kidney glomerulus.

The kidney glomerulus filters the blood that arrives at the kidney. It is formed of capillaries with small pores that allow small molecules to pass through that have a molecular weight of less than 40,000 Daltons,[26] but not larger macromolecules such as proteins.

In nephrotic syndrome, the glomeruli are affected by an inflammation or a hyalinization (the formation of a homogenous crystalline material within cells) that allows proteins such as albumin, antithrombin or the immunoglobulins to pass through the cell membrane and appear in urine.[14]

Albumin is the main protein in the blood that is able to maintain an oncotic pressure, which prevents the leakage of fluid into the extracellular medium and the subsequent formation of edemas.

As a response to hypoproteinemia the liver commences a compensatory mechanism involving the synthesis of proteins, such as alpha-2 macroglobulin and lipoproteins.[14] An increase in the latter can cause the hyperlipidemia associated with this syndrome. 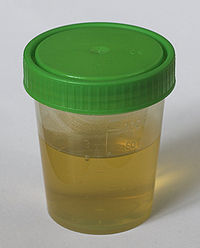 Urinalysis will be able to detect high levels of proteins and occasionally microscopic haematuria. 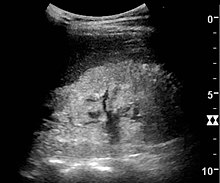 Ultrasound of a kidney with nephrotic syndrome. There is a hyperechoic kidney without demarcation of the cortex and medulla.[27]

Along with obtaining a complete medical history, a series of biochemical tests are required in order to arrive at an accurate diagnosis that verifies the presence of the illness. In addition, imaging of the kidneys (for structure and presence of two kidneys) is sometimes carried out, and/or a biopsy of the kidneys. The first test will be a urinalysis to test for high levels of proteins,[28] as a healthy subject excretes an insignificant amount of protein in their urine. The test will involve a 24-hour bedside urinary total protein estimation. The urine sample is tested for proteinuria (>3.5 g per 1.73 m2 per 24 hours). It is also examined for urinary casts, which are more a feature of active nephritis. Next a blood screen, comprehensive metabolic panel (CMP) will look for hypoalbuminemia: albumin levels of ≤2.5 g/dL (normal=3.5-5 g/dL). Then a Creatinine Clearance CCr test will evaluate kidney function particularly the glomerular filtration capacity.[29] Creatinine formation is a result of the breakdown of muscular tissue, it is transported in the blood and eliminated in urine. Measuring the concentration of organic compounds in both liquids evaluates the capacity of the glomeruli to filter blood. Electrolytes and urea levels may also be analysed at the same time as creatinine (EUC test) in order to evaluate kidney function. A lipid profile will also be carried out as high levels of cholesterol (hypercholesterolemia), specifically elevated LDL, usually with concomitantly elevated VLDL, is indicative of nephrotic syndrome.

A kidney biopsy may also be used as a more specific and invasive test method. A study of a sample's anatomical pathology may then allow the identification of the type of glomerulonephritis involved.[28] However, this procedure is usually reserved for adults as the majority of children suffer from minimal change disease that has a remission rate of 95% with corticosteroids.[30] A biopsy is usually only indicated for children that are corticosteroid resistant as the majority suffer from focal and segmental glomeruloesclerosis.[30]

Further investigations are indicated if the cause is not clear including analysis of auto-immune markers (ANA, ASOT, C3, cryoglobulins, serum electrophoresis), or ultrasound of the whole abdomen.

A broad classification of nephrotic syndrome based on underlying cause:

Some symptoms that are present in nephrotic syndrome, such as edema and proteinuria, also appear in other illnesses. Therefore, other pathologies need to be excluded in order to arrive at a definitive diagnosis.[31]

Acute fluid overload can cause edema in someone with kidney failure. These people are known to have kidney failure, and have either drunk too much or missed their dialysis. In addition, when Metastatic cancer spreads to the lungs or abdomen it causes effusions and fluid accumulation due to obstruction of lymphatic vessels and veins, as well as serous exudation.

The treatment of nephrotic syndrome can be symptomatic or can directly address the injuries caused to the kidney.

The objective of this treatment is to treat the imbalances brought about by the illness:[37] edema, hypoalbuminemia, hyperlipemia, hypercoagulability and infectious complications.

It may be necessary to give a person potassium or require a change in dietary habits if the diuretic drug causes hypokalaemia as a side effect.

In addition to these key imbalances, vitamin D and calcium are also taken orally in case the alteration of vitamin D causes a severe hypocalcaemia, this treatment has the goal of restoring physiological levels of calcium in the person.[49]

The treatment of kidney damage may reverse or delay the progression of the disease.[37] Kidney damage is treated by prescribing drugs:

The prognosis for nephrotic syndrome under treatment is generally good although this depends on the underlying cause, the age of the person and their response to treatment. It is usually good in children, because minimal change disease responds very well to steroids and does not cause chronic kidney failure. Any relapses that occur become less frequent over time;[53] the opposite occurs with mesangiocapillary glomerulonephritis, in which the kidney fails within three years of the disease developing, making dialysis necessary and subsequent kidney transplant.[53] In addition children under the age of 5 generally have a poorer prognosis than prepubescents, as do adults older than 30 years of age as they have a greater risk of kidney failure.[54]

Other causes such as focal segmental glomerulosclerosis frequently lead to end stage kidney disease. Factors associated with a poorer prognosis in these cases include level of proteinuria, blood pressure control and kidney function (GFR).

Without treatment nephrotic syndrome has a very bad prognosis especially rapidly progressing glomerulonephritis, which leads to acute kidney failure after a few months.

Nephrotic syndrome can affect any age, although it is mainly found in adults with a ratio of adults to children of 26 to 1.[55]

The syndrome presents in different ways in the two groups: the most frequent glomerulopathy in children is minimal change disease (66% of cases), followed by focal segmental glomerulosclerosis (8%) and mesangiocapillary glomerulonephritis (6%).[21] In adults the most common disease is mesangiocapillary glomerulonephritis (30-40%), followed by focal and segmental glomeruloesclerosis (15-25%) and minimal change disease (20%). The latter usually presents as secondary and not primary as occurs in children. Its main cause is diabetic nephropathy.[21] It usually presents in a person from their 40s or 50s. Of the glomerulonephritis cases approximately 60% to 80% are primary, while the remainder are secondary.[55]

There are also differences in epidemiology between the sexes, the disease is more common in men than in women by a ratio of 2 to 1.[55]

The epidemiological data also reveals information regarding the most common way that symptoms develop in people with nephrotic syndrome:[55] spontaneous remission occurs in up to 20% or 30% of cases during the first year of the illness. However, this improvement is not definitive as some 50% to 60% of people with Nephrotic syndrome die and / or develop chronic kidney failure 6 to 14 years after this remission. On the other hand, between 10% and 20% of people have continuous episodes of remissions and relapses without dying or jeopardizing their kidney. The main causes of death are cardiovascular, as a result of the chronicity of the syndrome, and thromboembolic accidents.