Lorlatinib, sold under the brand name Lorbrena and Lorviqua, is a medication used to treat non-small cell lung cancer (NSCLC).[1] Specifically it is used in anaplastic lymphoma kinase (ALK) positive cases that have failed other treatments.[1] It is taken by mouth.[1]

Common side effects are high cholesterol, high triglycerides, swelling, peripheral neuropathy, problems with memory, tiredness, weight gain, and joint pain.[2] Other side effects may include liver problems, seizures, hallucinations, pneumonitis, and AV block.[1] Use in pregnancy may harm the baby.[1] It is a tyrosine kinase inhibitor of ALK and ROS1.[1]

Lorlatinib is approved in the US and in Europe for the second- or third-line treatment of ALK-positive metastatic non-small-cell lung cancer (NSCLC).[5][6][7]

Lorlatinib must not be combined with strong inducers (i.e. activators) of the liver enzymes CYP3A4/5 if it can be avoided, as serious cases of liver toxicity have been observed under combination with the CYP3A4/5 inducer rifampicin.[8][9]

Lorlatinib is metabolized by the enzymes CYP3A4/5. Therefore, CYP3A4/5 inducers such as rifampicin, carbamazepine or St John's wort decrease its concentrations in the blood plasma and can reduce its effectiveness. Additionally, the combination of lorlatinib with rifampicin showed liver toxicity in studies. Inhibitors of these enzymes such as ketoconazole or grapefruit juice increase lorlatinib plasma concentrations, leading to higher toxicity. Lorlatinib is also a (moderate) CYP3A4/5 inducer, so that drugs that are metabolized by these enzymes are broken down more quickly when combined with lorlatinib. Examples include midazolam and ciclosporin.[8][9]

Interactions via other enzymes have only been studied in vitro. According to these findings, lorlatinib may inhibit CYP2C9, UGT1A1 and several transport proteins, induce CYP2B6, and has probably no relevant effect on CYP1A2.[9] 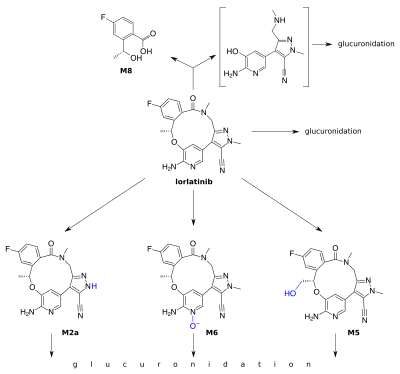 Lorlatinib is cleaved to the metabolite M8 (top left), which makes up 21% of the circulating substance, and an undetected metabolite (given in brackets). Other phase I metabolites are given in the bottom row. Most of these metabolites, as well as the original substance, undergo glucuronidation.[10]

Lorlatinib is a small molecule kinase inhibitor of ALK and ROS1 as well as a number of other kinases. It is active in vitro against many mutated forms of ALK.[8]

The drug is swallowed in the form of tablets. It reaches highest blood plasma concentrations 1.2 hours after a single dose, or 2 hours after ingestion when taken regularly. Its absolute bioavailability is 80.8%. Intake with fatty food increases its availability by 5%, which is not considered clinically significant. When in the bloodstream, 66% of the substance are bound to plasma proteins.[8][9] Lorlatinib is able to cross the blood-brain barrier.[11]

Lorlatinib is a white to off-white powder. It has high solubility in 0.1 M hydrochloric acid and very low solubility at a pH over 4.5.[10]

In 2015, FDA granted Pfizer orphan drug status for lorlatinib for the treatment of NSCLC.[12] In 2018, the FDA approved lortalinib for second- or third-line treatment of ALK-positive metastatic NSCLC.[5] In February 2019, the European CHMP of EMA recommended the granting of a conditional marketing authorisation.[13] In May 2019 the European Commission approved lorlatinib for the 28 countries of the EU, also as a second- or third-line treatment.[6][14]

In 2017, Pfizer announced that lorlatinib was shown to have activity against lung and brain tumors in people with ALK or ROS1 positive advanced non-small-cell lung cancer.[17]