Alectinib, sold under the brand name Alecensa, is a medication used to treat non-small-cell lung cancer (NSCLC).[2] It is used for advanced disease that is anaplastic lymphoma kinase (ALK) positive.[2] It is taken by mouth.[1]

Common side effects include tiredness, constipation, swelling, muscle pain, and low red blood cells.[3] Other side effects may include liver problems, pneumonitis, kidney problems, and muscle breakdown.[3] Use in pregnancy may harm the baby.[3] It is a tyrosine kinase inhibitor that blocks ALK.[1][2]

In November 2017 the FDA approved alectinib for the first-line treatment of patients with ALK-positive metastatic non-small cell lung cancer.[8] This based on the phase 3 ALEX trial comparing it with crizotinib.[8] 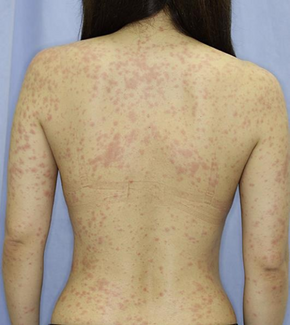 Apart from unspecific gastrointestinal effects such as constipation (in 34% of patients) and nausea (22%), common adverse effects in studies included oedema (swelling; 34%), myalgia (muscle pain; 31%), anaemia (low red blood cell count), sight disorders, light sensitivity and rashes (all below 20%).[11] Serious side effects occurred in 19% of patients; fatal ones in 2.8%.[9]

Alectinib has a low potential for interactions. While it is metabolised by the liver enzyme CYP3A4, and blockers of this enzyme accordingly increase its concentrations in the body, they also decrease concentrations of the active metabolite M4, resulting in only a small overall effect. Conversely, CYP3A4 inducers decrease alectinib concentrations and increase M4 concentrations. Interactions via other CYP enzymes and transporter proteins cannot be excluded but are unlikely to be of clinical significance.[11][10]

Proposed metabolism of alectinib. Alectinib itself and the active metabolite M4 are the main compounds found in the circulation, while the others are minor metabolites.[12]

When taken with a meal, the absolute bioavailability of the drug is 37%, and highest blood plasma concentrations are reached after four to six hours. Steady state conditions are reached within seven days. Plasma protein binding of alectinib and M4 is over 99%. The enzyme mainly responsible for alectinib metabolism is CYP3A4; other CYP enzymes and aldehyde dehydrogenases only play a small role. Alectinib and M4 account for 76% of the circulating substance, while the rest are minor metabolites.[11][12]

Alectinib has a pKa of 7.05. It is used in form of the hydrochloride, which is a white to yellow-white lumpy powder.[9]

It was granted an accelerated approval by the US Food and Drug Administration (FDA) in December 2015 to treat patients with advanced ALK-positive NSCLC whose disease worsened after, or who could not tolerate, treatment with crizotinib (Xalkori).[13] This was converted into a full approval in Nov 2017.[8]

It got a conditional approval by the European Medicines Agency in February 2017 for the same indication. This means that additional studies are awaited to confirm a positive benefit-risk-ratio.[14]

The approvals were based mainly on two trials: In a Japanese Phase I–II trial, after approximately 2 years, 19.6% of patients had achieved a complete response, and the 2-year progression-free survival rate was 76%.[7] In February 2016 the J-ALEX phase III study comparing alectinib with crizotinib was terminated early because an interim analysis showed that progression-free survival was longer with alectinib.[15]