Travoprost, sold under the brand name Travatan among others, is medications used to treat high pressure inside the eye including glaucoma.[3] Specifically it is used for open angle glaucoma when other agents are not sufficient.[4][3] It is used as an eye drop.[3] Effects generally occur within 2 hours.[3]

Common side effects include red eyes, blurry vision, eye pain, dry eyes, and change in color of the eyes.[3][4] Other significant side effects may include cataracts.[4] Use during pregnancy or breastfeeding is generally not recommended.[4] It is a prostaglandin analog and works by increasing the outflow of aqueous fluid from the eyes.[3]

Travoprost is used to treat high pressure inside the eye including glaucoma.[3] Specifically it is used for open angle glaucoma when other agents are not sufficient.[4][3]

The defined daily dose is not defined.[2] 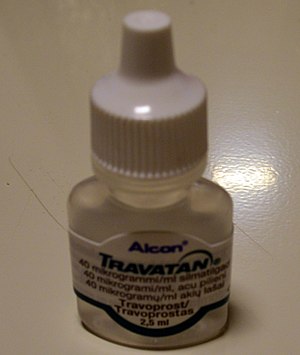 One 2.5 ml dropperette of travoprost

Possible side effects are:[8]

Research suggests that wiping the eye with an absorbent pad after the administration of eye drops can result in shorter eyelashes and a lesser chance of hyperpigmentation in the eyelid, compared to not wiping off excess fluid.[9]

It is a synthetic prostaglandin analog (or more specifically, an analog of prostaglandin F2α)[10][11] that works by increasing the outflow of aqueous fluid from the eyes.[12]

Like other analogs of prostaglandin F2α such as tafluprost and latanoprost, travoprost is an ester prodrug of the free acid, which acts as an agonist at the prostaglandin F receptor, increasing outflow of aqueous fluid from the eye and thus lowering intraocular pressure.[8]

Travoprost is absorbed through the cornea, where it is hydrolysed to the free travoprost acid. Highest concentrations of the acid in the eye are reached one to two hours after application, and its half-life in the aqueous fluid is 1.5 hours. Once it reaches the bloodstream, it is quickly metabolised, so that concentrations in the system do not exceed 25 pg/ml (compared to 20 ng/ml in the eye, which is higher by nearly a factor of 1000).[8]