Tumor lysis syndrome is a group of metabolic abnormalities that can occur as a complication during the treatment of cancer,[1] where large amounts of tumor cells are killed off (lysed) at the same time by the treatment, releasing their contents into the bloodstream. This occurs most commonly after the treatment of lymphomas and leukemias. In oncology and hematology, this is a potentially fatal complication, and patients at increased risk for TLS should be closely monitored before, during, and after their course of chemotherapy.

Tumor lysis syndrome is characterized by high blood potassium (hyperkalemia), high blood phosphate (hyperphosphatemia), low blood calcium (hypocalcemia), high blood uric acid (hyperuricemia), and higher than normal levels of blood urea nitrogen (BUN) and other nitrogen-containing compounds (azotemia). These changes in blood electrolytes and metabolites are a result of the release of cellular contents of dying cells into the bloodstream from breakdown of cells. In this respect, TLS is analogous to rhabdomyolysis, with comparable mechanism and blood chemistry effects but with different cause. In TLS, the breakdown occurs after cytotoxic therapy or from cancers with high cell turnover and tumor proliferation rates. The metabolic abnormalities seen in tumor lysis syndrome can ultimately result in nausea and vomiting, but more seriously acute uric acid nephropathy, acute kidney failure, seizures, cardiac arrhythmias, and death.[2][3]

Acute uric acid nephropathy (AUAN) due to hyperuricosuria has been a dominant cause of acute kidney failure but with the advent of effective treatments for hyperuricosuria, AUAN has become a less common cause than hyperphosphatemia. Two common conditions related to excess uric acid, gout and uric acid nephrolithiasis, are not features of tumor lysis syndrome.

Risk factors for tumor lysis syndrome depend on several different characteristics of the patient, the type of cancer, and the type of chemotherapy used.[8]

Chemotherapy Characteristics: Chemo-sensitive tumors, such as lymphomas, carry a higher risk for the development of tumor lysis syndrome. Those tumors that are more responsive to a chemotherapy agent carry a higher TLS risk.[3] Usually, the precipitating medication regimen includes combination chemotherapy, but TLS can be triggered in cancer patients by steroid treatment alone, and sometimes without any treatment—in this case the condition is referred to as "spontaneous tumor lysis syndrome".[7][9] 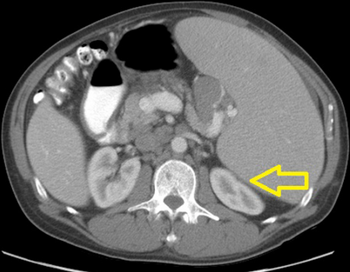 TLS should be suspected in patients with large tumor burden who develop acute kidney failure along with hyperuricemia (> 15 mg/dL) or hyperphosphatemia (> 8 mg/dL). (Most other acute kidney failure occurs with uric acid < 12 mg/dL and phosphate < 6 mg/dL). Acute uric acid nephropathy is associated with little or no urine output. The urinalysis may show uric acid crystals or amorphous urates. The hypersecretion of uric acid can be detected with a high urine uric acid - creatinine ratio > 1.0, compared to a value of 0.6–0.7 for most other causes of acute kidney failure.[citation needed]

In 2004, Cairo and Bishop defined a classification system for tumor lysis syndrome.[10]

A grading scale (0–5) is used depending on the presence of lab TLS, serum creatinine, arrhythmias, or seizures.

In 2011, Howard proposed a refinement of the standard Cairo-Bishop definition of TLS accounting for 2 limitations:[11]

Rasburicase is an alternative to allopurinol[12][13] and is reserved for people who are high-risk in developing TLS, or when xanthine oxidase inhibition is contraindicated (taking 6-MP or azathioprine). It is a synthetic urate oxidase enzyme and acts by degrading uric acid.[14] However, it's not clear if it results in any important benefits as of 2014.[2]Alkalization of the urine with acetazolamide or sodium bicarbonate is controversial. Routine alkalization of urine above pH of 7.0 is not recommended. Alkalization is also not required if uricase is used.[citation needed]

Treatment is first targeted at the specific metabolic disorder.

Acute kidney failure prior to chemotherapy. Since the major cause of acute kidney failure in this setting is uric acid build-up, therapy consists of rasburicase to wash out excessive uric acid crystals as well as a loop diuretic and fluids. Sodium bicarbonate should not be given at this time. If the patient does not respond, hemodialysis may be instituted, which is very efficient in removing uric acid, with plasma uric acid levels falling about 50% with each six-hour treatment.[citation needed]