Bowel obstruction, also known as intestinal obstruction, is a mechanical or functional obstruction of the intestines which prevents the normal movement of the products of digestion.[2][5] Either the small bowel or large bowel may be affected.[1] Signs and symptoms include abdominal pain, vomiting, bloating and not passing gas.[1] Mechanical obstruction is the cause of about 5 to 15% of cases of severe abdominal pain of sudden onset requiring admission to hospital.[1][2]

The condition may be treated conservatively or with surgery.[2] Typically intravenous fluids are given, a tube is placed through the nose into the stomach to decompress the intestines, and pain medications are given.[2] Antibiotics are often given.[2] In small bowel obstruction about 25% require surgery.[6] Complications may include sepsis, bowel ischemia and bowel perforation.[1]

About 3.2 million cases of bowel obstruction occurred in 2015 which resulted in 264,000 deaths.[3][4] Both sexes are equally affected and the condition can occur at any age.[6] Bowel obstruction has been documented throughout history, with cases detailed in the Ebers Papyrus of 1550 BC and by Hippocrates.[7]

Depending on the level of obstruction, bowel obstruction can present with abdominal pain, swollen abdomen, abdominal distension, vomiting,fecal vomiting and constipation.

Bowel obstruction may be complicated by dehydration and electrolyte abnormalities due to vomiting; respiratory compromise from pressure on the diaphragm by a distended abdomen, or aspiration of vomitus; bowel ischemia or perforation from prolonged distension or pressure from a foreign body. 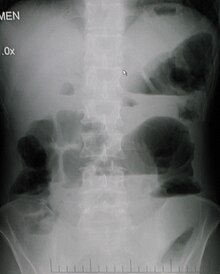 Causes of small bowel obstruction include:[2]

After abdominal surgery, the incidence of small bowel obstruction from any cause is 9%. In those where the cause of the obstruction was clear, adhesions are the single most common cause (more than half).[9]

Causes of large bowel obstruction include: 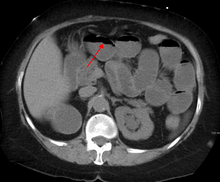 A small bowel obstruction as seen on CT

Average inner diameters and ranges of different sections of the large intestine.[12]

The main diagnostic tools are blood tests, X-rays of the abdomen, CT scanning, and ultrasound. If a mass is identified, biopsy may determine the nature of the mass.

Radiological signs of bowel obstruction include bowel distension and the presence of multiple (more than six) gas-fluid levels on supine and erect abdominal radiographs.[medical citation needed] Ultrasounds may be as useful as CT scanning to make the diagnosis.[13]

Contrast enema or small bowel series or CT scan can be used to define the level of obstruction, whether the obstruction is partial or complete, and to help define the cause of the obstruction. The appearance of water-soluble contrast in the cecum on an abdominal radiograph within 24 hours of it being given by mouth predicts resolution of an adhesive small bowel obstruction with sensitivity of 97% and specificity of 96%.[14]

Colonoscopy, small bowel investigation with ingested camera or push endoscopy, and laparoscopy are other diagnostic options.

Differential diagnoses of bowel obstruction include:

Some causes of bowel obstruction may resolve spontaneously;[16] many require operative treatment.[17] In adults, frequently the surgical intervention and the treatment of the causative lesion are required. In malignant large bowel obstruction, endoscopically placed self-expanding metal stents may be used to temporarily relieve the obstruction as a bridge to surgery,[18] or as palliation.[19] Diagnosis of the type of bowel obstruction is normally conducted through initial plain radiograph of the abdomen, luminal contrast studies, computed tomography scan, or ultrasonography prior to determining the best type of treatment.[20]

Further research is needed to find out if parenteral nutrition is of benefit to people with an inoperable blockage of the bowel caused by advanced cancer.[21]

A small flexible tube (nasogastric tube) may be inserted through the nose into the stomach to help decompress the dilated bowel. This tube is uncomfortable but relieves the abdominal cramps, distention, and vomiting. Intravenous therapy is utilized and the urine output is monitored with a catheter in the bladder.[23]

Most people with SBO are initially managed conservatively because in many cases, the bowel will open up. Some adhesions loosen up and the obstruction resolves. The patient is examined several times a day, and X-ray images are made to ensure he or she is not getting clinically worse.[24]

Conservative treatment involves insertion of a nasogastric tube, correction of dehydration and electrolyte abnormalities. Opioid pain relievers may be used for patients with severe pain. Antiemetics may be administered if the patient is vomiting. Adhesive obstructions often settle without surgery. If the obstruction is complete a surgery is usually required.

Most patients improve with conservative care in 2–5 days. When the obstruction is cancer, surgery is the only treatment. Those with bowel resection or lysis of adhesions usually stay in the hospital a few more days until they can eat and walk.[25]

Fetal and neonatal bowel obstructions are often caused by an intestinal atresia, where there is a narrowing or absence of a part of the intestine. These atresias are often discovered before birth via an ultrasound, and treated with using laparotomy after birth. If the area affected is small, then the surgeon may be able to remove the damaged portion and join the intestine back together. In instances where the narrowing is longer, or the area is damaged and cannot be used for a period of time, a temporary stoma may be placed.

Cases of SBO related to cancer are more complicated and require additional intervention to address the malignancy, recurrence, and metastasis, and thus are associated with poorer prognosis.[citation needed]