Allergic rhinitis, also known as hay fever, is a type of inflammation in the nose which occurs when the immune system overreacts to allergens in the air.[6] Signs and symptoms include a runny or stuffy nose, sneezing, red, itchy, and watery eyes, and swelling around the eyes.[1] The fluid from the nose is usually clear.[2] Symptom onset is often within minutes following allergen exposure and can affect sleep, and the ability to work or study.[2][8] Some people may develop symptoms only during specific times of the year, often as a result of pollen exposure.[3] Many people with allergic rhinitis also have asthma, allergic conjunctivitis, or atopic dermatitis.[2]

Allergic rhinitis is typically triggered by environmental allergens such as pollen, pet hair, dust, or mold.[3] Inherited genetics and environmental exposures contribute to the development of allergies.[3] Growing up on a farm and having multiple siblings decreases this risk.[2] The underlying mechanism involves IgE antibodies that attach to an allergen, and subsequently result in the release of inflammatory chemicals such as histamine from mast cells.[2] Diagnosis is typically based on a combination of symptoms and a skin prick test or blood tests for allergen-specific IgE antibodies.[4] These tests, however, can be falsely positive.[4] The symptoms of allergies resemble those of the common cold; however, they often last for more than two weeks and typically do not include a fever.[3]

Exposure to animals early in life might reduce the risk of developing these specific allergies.[3] Several different types of medications reduce allergic symptoms: including nasal steroids, antihistamines, such as diphenhydramine, cromolyn sodium, and leukotriene receptor antagonists such as montelukast.[5] Oftentimes, medications do not completely control symptoms, and they may also have side effects.[2] Exposing people to larger and larger amounts of allergen, known as allergen immunotherapy (AIT), may be effective.[9] The allergen can be given as an injection under the skin or as a tablet under the tongue.[6] Treatment typically lasts three to five years, after which benefits may be prolonged.[6]

Allergic rhinitis is the type of allergy that affects the greatest number of people.[10] In Western countries, between 10–30% of people are affected in a given year.[2][7] It is most common between the ages of twenty and forty.[2] The first accurate description is from the 10th-century physician Rhazes.[11] In 1859, Charles Blackley identified pollen as the cause.[12] In 1906, the mechanism was determined by Clemens von Pirquet.[10] The link with hay came about due to an early (and incorrect) theory that the symptoms were brought about by the smell of new hay.[13][14]

There can also be behavioral signs; in order to relieve the irritation or flow of mucus, people may wipe or rub their nose with the palm of their hand in an upward motion: an action known as the "nasal salute" or the "allergic salute". This may result in a crease running across the nose (or above each nostril if only one side of the nose is wiped at a time), commonly referred to as the "transverse nasal crease", and can lead to permanent physical deformity if repeated enough.[17]

People might also find that cross-reactivity occurs.[18] For example, people allergic to birch pollen may also find that they have an allergic reaction to the skin of apples or potatoes.[19] A clear sign of this is the occurrence of an itchy throat after eating an apple or sneezing when peeling potatoes or apples. This occurs because of similarities in the proteins of the pollen and the food.[20] There are many cross-reacting substances. Hay fever is not a true fever, meaning it does not cause a core body temperature in the fever over 37.5–38.3 °C (99.5–100.9 °F).

Allergic rhinitis triggered by the pollens of specific seasonal plants is commonly known as "hay fever", because it is most prevalent during haying season. However, it is possible to have allergic rhinitis throughout the year. The pollen that causes hay fever varies between individuals and from region to region; in general, the tiny, hardly visible pollens of wind-pollinated plants are the predominant cause. Pollens of insect-pollinated plants are too large to remain airborne and pose no risk. Examples of plants commonly responsible for hay fever include:

Allergic rhinitis may also be caused by allergy to Balsam of Peru, which is in various fragrances and other products.[22][23][24]

Predisposing factors to allergic rhinitis include eczema (atopic dermatitis) and asthma. These three conditions can often occur together which is referred to as the atopic triad.[25] Additionally, environmental exposures such as air pollution and maternal tobacco smoking can increase an individual's chances of developing allergies.[25] 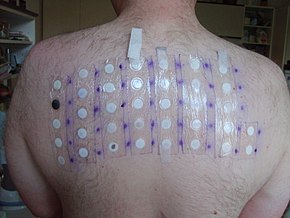 Allergy testing may reveal the specific allergens to which an individual is sensitive. Skin testing is the most common method of allergy testing.[26] This may include a patch test to determine if a particular substance is causing the rhinitis, or an intradermal, scratch, or other test. Less commonly, the suspected allergen is dissolved and dropped onto the lower eyelid as a means of testing for allergies. This test should be done only by a physician, since it can be harmful if done improperly. In some individuals not able to undergo skin testing (as determined by the doctor), the RAST blood test may be helpful in determining specific allergen sensitivity. Peripheral eosinophilia can be seen in differential leukocyte count.

Allergy testing is not definitive. At times, these tests can reveal positive results for certain allergens that are not actually causing symptoms, and can also not pick up allergens that do cause an individual's symptoms. The intradermal allergy test is more sensitive than the skin prick test, but is also more often positive in people that do not have symptoms to that allergen.[27]

Local allergic rhinitis is an allergic reaction in the nose to an allergen, without systemic allergies. So skin-prick and blood tests for allergy are negative, but there are IgE antibodies produced in the nose that react to a specific allergen. Intradermal skin testing may also be negative.[29]

As of 2014, local allergenic rhinitis had mostly been investigated in Europe; in the United States, the nasal provocation testing necessary to diagnose the condition was not widely available.[33]:&hairsp;<span title="Script error: No such module "DecodeEncode".">617&hairsp;

Prevention often focuses on avoiding specific allergens that cause an individual's symptoms. These methods include not having pets, not having carpets or upholstered furniture in the home, and keeping the home dry.[34] Specific anti-allergy zippered covers on household items like pillows and mattresses have also proven to be effective in preventing dust mite allergies.[26] Interestingly, studies have shown that growing up on a farm and having many older brothers and sisters can decrease an individual's risk for developing allergic rhinitis.[2]

The goal of rhinitis treatment is to prevent or reduce the symptoms caused by the inflammation of affected tissues. Measures that are effective include avoiding the allergen.[15] Intranasal corticosteroids are the preferred medical treatment for persistent symptoms, with other options if this is not effective.[15] Second line therapies include antihistamines, decongestants, cromolyn, leukotriene receptor antagonists, and nasal irrigation.[15] Antihistamines by mouth are suitable for occasional use with mild intermittent symptoms.[15] Mite-proof covers, air filters, and withholding certain foods in childhood do not have evidence supporting their effectiveness.[15]

Antihistamine drugs can be taken orally and nasally to control symptoms such as sneezing, rhinorrhea, itching, and conjunctivitis.

It is best to take oral antihistamine medication before exposure, especially for seasonal allergic rhinitis. In the case of nasal antihistamines like azelastine antihistamine nasal spray, relief from symptoms is experienced within 15 minutes allowing for a more immediate 'as-needed' approach to dosage. There is not enough evidence of antihistamine efficacy as an add-on therapy with nasal steroids in the management of intermittent or persistent allergic rhinitis in children, so its adverse effects and additional costs must be considered.[35]

Ophthalmic antihistamines (such as azelastine in eye drop form and ketotifen) are used for conjunctivitis, while intranasal forms are used mainly for sneezing, rhinorrhea, and nasal pruritus.[36]

Pseudoephedrine is also indicated for vasomotor rhinitis. It is used only when nasal congestion is present and can be used with antihistamines. In the United States, oral decongestants containing pseudoephedrine must be purchased behind the pharmacy counter in an effort to prevent the manufacturing of methamphetamine.[36]Desloratadine/pseudoephedrine can also be used for this condition[citation needed]

Intranasal corticosteroids are used to control symptoms associated with sneezing, rhinorrhea, itching, and nasal congestion.[25] Steroid nasal sprays are effective and safe, and may be effective without oral antihistamines. They take several days to act and so must be taken continually for several weeks, as their therapeutic effect builds up with time.

In 2013, a study compared the efficacy of mometasone furoate nasal spray to betamethasone oral tablets for the treatment of people with seasonal allergic rhinitis and found that the two have virtually equivalent effects on nasal symptoms in people.[37]

Systemic steroids such as prednisone tablets and intramuscular triamcinolone acetonide or glucocorticoid (such as betamethasone) injection are effective at reducing nasal inflammation,[citation needed] but their use is limited by their short duration of effect and the side-effects of prolonged steroid therapy.[38]

Other measures that may be used second line include: decongestants, cromolyn, leukotriene receptor antagonists, and nonpharmacologic therapies such as nasal irrigation.[15]

Topical decongestants may also be helpful in reducing symptoms such as nasal congestion, but should not be used for long periods, as stopping them after protracted use can lead to a rebound nasal congestion called rhinitis medicamentosa.

For nocturnal symptoms, intranasal corticosteroids can be combined with nightly oxymetazoline, an adrenergic alpha-agonist, or an antihistamine nasal spray without risk of rhinitis medicamentosa.[39]

Nasal saline irrigation (a practice where salt water is poured into the nostrils), may have benefits in both adults and children in relieving the symptoms of allergic rhinitis and it is unlikely to be associated with adverse effects.[40]

Allergen immunotherapy (AIT, also termed desensitization) involves administering doses of allergens to accustom the body to substances that are generally harmless (pollen, house dust mites), thereby inducing specific long-term tolerance.[41] Allergen immunotherapy is the only treatment that alters the disease mechanism.[42] Immunotherapy can be administered orally (as sublingual tablets or sublingual drops), or by injections under the skin (subcutaneous). Subcutaneous immunotherapy is the most common form and has the largest body of evidence supporting its effectiveness.[43] Use under the tongue can take years to show a small to moderate benefit.[9]

There are no forms of complementary or alternative medicine that are evidence-based for allergic rhinitis.[26] Therapeutic efficacy of alternative treatments such as acupuncture and homeopathy is not supported by available evidence.[44][45] While some evidence shows that acupuncture is effective for rhinitis, specifically targeting the sphenopalatine ganglion acupoint, these trials are still limited.[46] Overall, the quality of evidence for complementary-alternative medicine is not strong enough to be recommended by the American Academy of Allergy, Asthma and Immunology.[26][47]

Allergic rhinitis is the type of allergy that affects the greatest number of people.[10] In Western countries, between 10 and 30 percent of people are affected in a given year.[2] It is most common between the ages of twenty and forty.[2]

The first accurate description is from the 10th century physician Rhazes.[11] Pollen was identified as the cause in 1859 by Charles Blackley.[12] In 1906 the mechanism was determined by Clemens von Pirquet.[10] The link with hay came about due to an early (and incorrect) theory that the symptoms were brought about by the smell of new hay.[13][14]

‹ The template below (Allergic conditions) is being considered for merging. See templates for discussion to help reach a consensus. ›