Nasal septum deviation is a disorder of the nose in which the nasal septum is bent.[2] Symptoms may include nasal congestion on one side; though many have no symptoms.[2][1] Complications may include sinusitis or nosebleeds.[2]

This may be present at birth or occur as a result of injury.[2] In most cases there is no history of injury, though some cases may result from issues early in life.[4] Diagnosis is based on examination.[2]

Often no treatment is required; however, in severe cases surgery in the form of septoplasty may be an option.[2] Despite septoplasty being common, evidence of benefit is lacking.[5] Though in people with obstructive sleep apnea it may improve the effectiveness of CPAP.[1] A minor degree of deviation is present in most people.[2]

The nasal septum is the bone and cartilage in the nose that separates the nasal cavity into the two nostrils. The cartilage is called the quadrangular cartilage and the bones comprising the septum include the maxillary crest, vomer and the perpendicular plate of the ethmoid. Normally, the septum lies centrally, and thus the nasal passages are symmetrical.[8] A deviated septum is an abnormal condition in which the top of the cartilaginous ridge leans to the left or the right, causing obstruction of the affected nasal passage. The condition can result in poor drainage of the sinuses. People can also complain of difficulty breathing, headaches, bloody noses, or of sleeping disorders such as snoring or sleep apnea.[8]

It is common for nasal septa to depart from the exact centerline; the septum is only considered deviated if the shift is substantial or causes problems.[9] Many people with a deviation are unaware they have it until some pain is produced. By itself, a deviated septum can go undetected for years and thus be without any need for correction.[9]

It is most frequently caused by impact trauma, such as by a blow to the face.[9] It can also be a congenital disorder, caused by compression of the nose during childbirth.[9] Deviated septum is associated with genetic connective tissue disorders such as Marfan syndrome, Homocystinuria and Ehlers–Danlos syndrome.[10]

Nasal septum deviation is the most common cause of nasal obstruction.[11] A history of trauma to the nose is often present including trauma from the process of birth or microfractures.[11] A medical professional, such as an otorhinolaryngologist (ears, nose, and throat doctor), typically makes the diagnosis after taking a thorough history from the affected person and performing a physical examination.[11] Imaging of the nose is sometimes used to aid in making the diagnosis as well.[11] 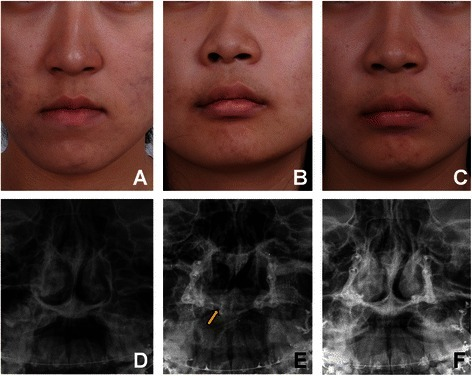 A surgical procedure known as septoplasty can cure symptoms related to septal deviations. The surgery lasts roughly one hour and does not result in any cosmetic alteration or external scars. Nasal congestion, pain,[12] drainage, or swelling may occur within the first few days after the surgery.[13] Recovery from the procedure may take anywhere from 2 days to 4 weeks to heal completely. Septal bones never regrow. If symptoms reappear they are not related to deviations. Reappearance of symptoms may be due to mucosal metaplasia of the nose.