Saline, also known as saline solution, is a mixture of sodium chloride in water and has a number of uses in medicine.[2] Applied to the affected area it is used to clean wounds, help remove contact lenses, and help with dry eyes.[3] By injection into a vein it is used to treat dehydration such as from gastroenteritis and diabetic ketoacidosis.[3] It is also used to dilute other medications to be given by injection.[2]

Large amounts may result in fluid overload, swelling, acidosis, and high blood sodium.[2][3] In those with long-standing low blood sodium, excessive use may result in osmotic demyelination syndrome.[3] Saline is in the crystalloid family of medications.[4] It is most commonly used as a sterile 9 g of salt per litre (0.9%) solution, known as normal saline.[2] Higher and lower concentrations may also occasionally be used.[5][6] Saline has a pH of 5.5 (mainly due to dissolved carbon dioxide) making it acidic.[7]

The medical use of saline began around 1831.[8] It is on the World Health Organization's List of Essential Medicines.[9] The wholesale cost in the developing world is about US$0.60–4.20 per liter of normal saline.[10] In 2017, sodium was the 225th most commonly prescribed medication in the United States, with more than two million prescriptions.[11][12] 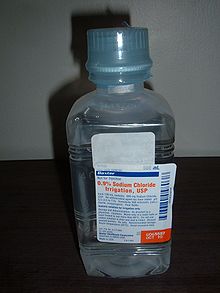 Concentrations vary from low to normal to high. High concentrations are used rarely in medicine but frequently in molecular biology.

Normal saline (NSS, NS or N/S) is the commonly used phrase for a solution of 0.90% w/v of NaCl, 308 mOsm/L or 9.0 g per liter. Less commonly, this solution is referred to as physiological saline or isotonic saline (because it closely approximates isotonic, that is, physiologically normal, solution); although neither of those names is technically accurate (because normal saline is not exactly like blood serum), they convey the practical effect usually seen: good fluid balance with minimal hypotonicity or hypertonicity. NS is used frequently in intravenous drips (IVs) for people who cannot take fluids orally and have developed or are in danger of developing dehydration or hypovolemia. NS is also used for aseptic purpose. NS is typically the first fluid used when hypovolemia is severe enough to threaten the adequacy of blood circulation, and has long been believed to be the safest fluid to give quickly in large volumes. However, it is now known that rapid infusion of NS can cause metabolic acidosis.[13]

For medical purposes, saline is often used to flush wounds and skin abrasions. Normal saline will not burn or sting when applied.

Saline is also used in I.V. therapy, intravenously supplying extra water to rehydrate people or supplying the daily water and salt needs ("maintenance" needs) of a person who is unable to take them by mouth. Because infusing a solution of low osmolality can cause problems such as hemolysis, intravenous solutions with reduced saline concentrations (less than 0.9%) typically have dextrose (glucose) added to maintain a safe osmolality while providing less sodium chloride.

The amount of normal saline infused depends largely on the needs of the person (e.g. ongoing diarrhea or heart failure).

Saline is also often used for nasal washes to relieve some of the symptoms of the common cold.[18] The solution exerts a softening and loosening influence on the mucus to make it easier to wash out and clear the nasal passages for both babies[19] and adults.[20][21] In this case "home-made" saline may be used: this is made by dissolving approximately half a teaspoon of table salt into 240ml (approx. 8 ounces) of clean tap water.[22] In very rare instances, amoeba Naegleria fowleri infection can occur if amoeba enters the body through the nose, therefore water used for nasal irrigation should be sterile.[23] Note that clean tap water is not necessarily a sterile liquid.

Eye drops are saline-containing drops used on the eye. Depending on the condition being treated, they may contain steroids, antihistamines, sympathomimetics, beta receptor blockers, parasympathomimetics, parasympatholytics, prostaglandins, non-steroidal anti-inflammatory drugs (NSAIDs), antibiotics or topical anesthetics. Eye drops sometimes do not have medications in them and are only lubricating and tear-replacing solutions.

Syringe designed saline drops (e.g. Wallace Cameron Ultra Saline Minipod) are distributed in modern needle-exchange programmes as drugs efficiently can be administered either by injection, or ophthalmic, which is compared to intravenous use; By demonstration, the elimination of latanoprost acid from plasma is rapid (half-life 17 minutes) after either ophthalmic or intravenous administration.[24] However, ophthalmic use is done with sterile filtered drugs that is potent in quite small doses, and with adjusted acidity of pH 7.0–7.5 after the drug has been added, to avoid eye damage. The human eye has a pH of approximately 7.5, water has 7.0.[25]

The defined daily dose is not established (by injection).[1] 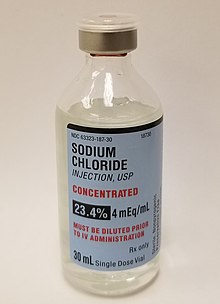 Hypertonic saline—7% NaCl solutions are considered mucoactive agents and thus are used to hydrate thick secretions (mucus) in order to make it easier to cough up and out (expectorate). 3% hypertonic saline solutions are also used in critical care settings, acutely increased intracranial pressure, or severe hyponatremia.[28] Inhalation of hypertonic saline has also been shown to help in other respiratory problems, specifically bronchiolitis.[29] Hypertonic saline is currently recommended by the Cystic Fibrosis Foundation as a primary part of a cystic fibrosis treatment regimen.[30]

An 11% solution of xylitol with 0.65% saline stimulates the washing of the nasopharynx and has an effect on the nasal pathogenic bacteria. This has been used in complementary and alternative medicine.[31]

Other concentrations commonly used include:

In medicine, common types of salines include:

And in cell biology, in addition to the above the following are used:

Saline was believed to have originated during the Indian Blue cholera pandemic that swept across Europe in 1831. William Brooke O'Shaughnessy, a recent graduate of Edinburgh Medical School, proposed in an article to medical journal The Lancet to inject people with cholera with highly oxygenated salts to treat the "universal stagnation of the venous system and rapid cessation of arterialisation of the blood" seen in people with severely dehydrated cholera.[34] He found his treatment harmless in dogs, and his proposal was soon adopted by the physician Thomas Latta in treating people with cholera to beneficial effect. In the following decades, variations and alternatives to Latta's solution were tested and used in treating people with cholera. These solutions contained a range of concentrations of sodium, chloride, potassium, carbonate, phosphate, and hydroxide. The breakthrough in achieving physiological concentrations was accomplished by Sydney Ringer in the early 1880s,[35] when he determined the optimal salt concentrations to maintain the contractility of frog heart muscle tissue. Normal saline is considered a descendant of the pre-Ringer solutions, as Ringer's findings were not adopted and widely used until decades later. The term "normal saline" itself appears to have little historical basis, except for studies done in 1882–83 by Dutch physiologist Hartog Jacob Hamburger; these in vitro studies of red cell lysis suggested incorrectly that 0.9% was the concentration of salt in human blood (rather than 0.6%, the true concentration).[36]

Normal saline has become widely used in modern medicine, but due to the mismatch with real blood, other solutions have proved better. The 2018 publication of a randomized, controlled trial with 15,000 people showed that lactated Ringer's solution reduced mortality risk of people in intensive care unit by 1% compared to normal saline, which given the large number of people is a significant reduction.[37]

Coconut water has been used in place of normal saline in areas without access to normal saline.[38] Its use, however, has not been well studied.[38]