Pulmonary fibrosis is a condition in which the lungs become scarred over time.[1] Symptoms include shortness of breath, a dry cough, feeling tired, weight loss, and nail clubbing.[1] Complications may include pulmonary hypertension, respiratory failure, pneumothorax, and lung cancer.[2]

There is no known cure.[1] Treatment is directed towards efforts to improve symptoms and may include oxygen therapy and pulmonary rehabilitation.[1][4] Certain medications may be used to try to slow the worsening of scarring.[4] Lung transplantation may occasionally be an option.[3] At least 5 million people are affected globally.[5] Life expectancy is generally less than five years.[3] 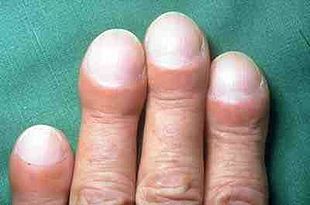 Clubbing of the fingers in idiopathic pulmonary fibrosis

Symptoms of pulmonary fibrosis are mainly:[6]

Pulmonary fibrosis is suggested by a history of progressive shortness of breath (dyspnea) with exertion. Sometimes fine inspiratory crackles can be heard at the lung bases on auscultation. A chest X-ray may or may not be abnormal, but high-resolution CT will frequently demonstrate abnormalities.[3]

Pulmonary fibrosis may be a secondary effect of other diseases. Most of these are classified as interstitial lung diseases. Examples include autoimmune disorders, viral infections and bacterial infection like tuberculosis which may cause fibrotic changes in both lung's upper or lower lobes and other microscopic injuries to the lung. However, pulmonary fibrosis can also appear without any known cause. In this case, it is termed "idiopathic".[7] Most idiopathic cases are diagnosed as idiopathic pulmonary fibrosis. This is a diagnosis of exclusion of a characteristic set of histologic/pathologic features known as usual interstitial pneumonia (UIP). In either case, there is a growing body of evidence which points to a genetic predisposition in a subset of patients. For example, a mutation in surfactant protein C (SP-C) has been found to exist in some families with a history of pulmonary fibrosis.[8] Autosomal dominant mutations in the TERC or TERT genes, which encode telomerase, have been identified in about 15 percent of pulmonary fibrosis patients.[9]

Diseases and conditions that may cause pulmonary fibrosis as a secondary effect include:[3][8] 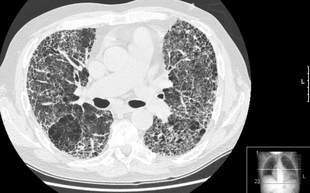 The diagnosis can be confirmed by lung biopsy.[3] A videoscopic assisted thoracoscopic wedge biopsy (VATS) under general anesthesia may be necessary to obtain enough tissue to make an accurate diagnosis. This kind of biopsy involves placement of several tubes through the chest wall, one of which is used to cut off a piece of lung to send for evaluation. The removed tissue is examined histopathologically by microscopy to confirm the presence and pattern of fibrosis as well as presence of other features that may indicate a specific cause e.g. specific types of mineral dust or possible response to therapy e.g. a pattern of so-called non-specific interstitial fibrosis.[3]

Misdiagnosis is common because, while overall pulmonary fibrosis is not rare, each individual type of pulmonary fibrosis is uncommon and the evaluation of patients with these diseases is complex and requires a multidisciplinary approach. Terminology has been standardized but difficulties still exist in their application. Even experts may disagree with the classification of some cases.[17]

Pulmonary fibrosis creates scar tissue. The scarring is permanent once it has developed.[3] Slowing the progression and prevention depends on the underlying cause: 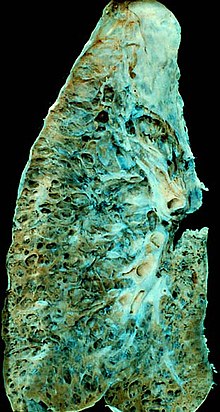 Hypoxia caused by pulmonary fibrosis can lead to pulmonary hypertension, which, in turn, can lead to heart failure of the right ventricle. Hypoxia can be prevented with oxygen supplementation.[3]

Pulmonary fibrosis may also result in an increased risk for pulmonary emboli, which can be prevented by anticoagulants.[3]

Five million people worldwide are affected by pulmonary fibrosis. The rates below are per 100,000 persons, and the ranges reflect narrow and broad inclusion criteria, respectively.

Based on these rates, pulmonary fibrosis prevalence in the United States could range from more than 29,000 to almost 132,000, based on the population in 2000 that was 18 years or older. The actual numbers may be significantly higher due to misdiagnosis. Typically, patients are in their forties and fifties when diagnosed while the incidence of idiopathic pulmonary fibrosis increases dramatically after the age of fifty. However, loss of pulmonary function is commonly ascribed to old age, heart disease or to more common lung diseases.