Laryngomalacia is an abnormal voice box that collapses when breathing in, resulting in brief periods of airway obstruction.[1] Symptoms generally include noisy breathing or stridor that begins at or shortly after birth.[2][1] The condition generally lasts a relatively long time.[3] Complications may include bluish skin, apnea, and failure to thrive.[2][1]

The cause is unknown.[1] Risk factors may include prematurity and reflux.[2] Proposed mechanisms include problems with neuromuscular coordination and anatomical changes.[1] Diagnosis is generally confirmed by fiberoptic laryngoscopy.[2]

Management is generally conservative in those with mild to moderate symptoms.[2] This may include feeding well upright and antireflux therapy.[2] In most cases symptoms resolve by 18 months of age.[2] In the 15% of cases with severe symptoms surgery may be indicated.[2]

About 1 in 2,500 babies are affected.[2] Males and females appear to be affected equally frequently.[2] It is the most common cause of stridor in children under the age of 1 year old.[2] The condition was first described in the early 1800s.[4] The term "laryngomalacia" is from the Greek for "soft larynx".[4]

In infantile laryngomalacia, the supraglottic larynx (the part above the vocal cords) is tightly curled, with a short band holding the cartilage shield in the front (the epiglottis) tightly to the mobile cartilage in the back of the larynx (the arytenoids). These bands are known as the aryepiglottic folds. The shortened aryepiglottic folds cause the epiglottis to be curled on itself. This is the well known "omega shaped" epiglottis in laryngomalacia. Another common finding of laryngomalacia involves the posterior or back part of the larynx, where the arytenoid cartilages or the mucosa/tissue over the arytenoid cartilages can collapse into the airway and cause airway obstruction.

Laryngomalacia results in partial airway obstruction, most commonly causing a characteristic high-pitched squeaking noise on inhalation (inspiratory stridor). Some infants have feeding difficulties related to this problem. Rarely, children will have significant life-threatening airway obstruction. The vast majority, however, will only have stridor without other more serious symptoms such as dyspnea (difficulty breathing). 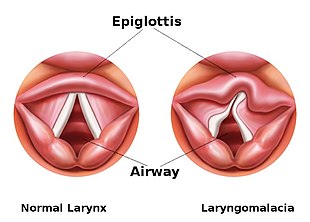 Although laryngomalacia is not associated with a specific gene, there is evidence that some cases may be inherited.[5][6] Relaxation or a lack of muscle tone in the upper airway may be a factor. It is often worse when the infant is on his or her back, because the floppy tissues can fall over the airway opening more easily in this position.[7]

The physician will ask some questions about the baby's health problems and may recommend a flexible laryngoscopy to further evaluate the infant's condition.[7] Additional testing can be done to confirm the diagnoses including; flexible fiberoptic laryngoscopy, airway fluoroscopy, direct laryngoscopy and bronchoscopy.[8]

Time is the only treatment necessary in more than 90% of infant cases.[9] In other cases, surgery may be necessary.[10][11][12] Most commonly, this involves cutting the aryepiglottic folds to let the supraglottic airway spring open. Trimming of the arytenoid cartilages or the mucosa/ tissue over the arytenoid cartilages can also be performed as part of the supraglottoplasty. Supraglottoplasty can be performed bilaterally (on both the left and right sides at the same time), or be staged where only one side is operated on at a time.[13]

Treatment of gastroesophageal reflux disease can also help in the treatment of laryngomalacia, since gastric contents can cause the back part of the larynx to swell and collapse even further into the airway.

In some cases, a temporary tracheostomy may be necessary.

Laryngomalacia becomes symptomatic after the first few months of life (2–3 months), and the stridor may get louder over the first year, as the child moves air more vigorously. Most of the cases resolve spontaneously and less than 15% of the cases will need surgical intervention. Parents need to be supported and educated about the condition.

Although this is a congenital lesion, airway sounds typically begin at age 4–6 weeks. Until that age, inspiratory flow rates may not be high enough to generate the sounds. Symptoms typically peak at age 6–8 months and remit by age 2 years.

Late-onset laryngomalacia may be a distinct entity, which can present after age of 2 years