An autoimmune disease is a condition arising from an abnormal immune response to a functioning body part.[1] There are at least 80 types of autoimmune diseases.[1] Nearly any body part can be involved.[3] Common symptoms include low grade fever and feeling tired.[1] Often symptoms come and go.[1]

The cause is generally unknown.[3] Some autoimmune diseases such as lupus run in families, and certain cases may be triggered by infections or other environmental factors.[1] Some common diseases that are generally considered autoimmune include celiac disease, diabetes mellitus type 1, Graves' disease, inflammatory bowel disease, multiple sclerosis, psoriasis, rheumatoid arthritis, and systemic lupus erythematosus.[1][4] The diagnosis can be difficult to determine.[1]

Treatment depends on the type and severity of the condition.[1] Nonsteroidal anti-inflammatory drugs (NSAIDs) and immunosuppressants are often used.[1] Intravenous immunoglobulin may also occasionally be used.[2] While treatment usually improves symptoms, they do not typically cure the disease.[1]

About 24 million (7%) people in the United States are affected by an autoimmune disease.[1][3] Women are more commonly affected than men.[1] Often they start during adulthood.[1] The first autoimmune diseases were described in the early 1900s.[5] 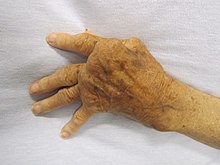 Autoimmune diseases present similar symptoms across the more than eighty different types.[citation needed] The appearance and severity of these signs and symptoms depends on the location and type of autoimmune response that occurs. An individual may also have more than one autoimmune disease simultaneously, and display symptoms of multiple diseases. Signs and symptoms presented, and the disease itself, can be influenced by various other factors such as age, hormones, and environmental factors.[6] In general, the common symptoms are:[7]

The appearance of these signs and symptoms can fluctuate, and when they reappear, it is known as a flare-up.[7] Such signs and symptoms may aid in diagnosis by supporting the results from biologic markers of autoimmune diseases.[8]

There are several areas that are commonly impacted by autoimmune diseases. These areas include: blood vessels, underlying connective tissues, joints and muscles, red blood cells, skin, and endocrine glands, like thyroid or pancreas glands.[7]

These diseases tend to have characteristic pathological effects which characterize them as an autoimmune disease. Such features include damage to or destruction of tissues where there is an abnormal immune response, altered organ growth, and altered organ function depending on the location of the disease.[7] Some diseases are organ specific and are restricted to affecting certain tissues, while others are systemic diseases that impact many tissues throughout the body. Signs and symptoms may vary depending on which of these categories an individual’s disease falls under.[9]

The cause is generally unknown.[3] Some autoimmune diseases such as lupus run in families, and certain cases may be triggered by infections or other environmental factors.[1] There are more than 100 autoimmune diseases.[11] Some common diseases that are generally considered autoimmune include celiac disease, diabetes mellitus type 1, Graves' disease, inflammatory bowel disease, multiple sclerosis, psoriasis, rheumatoid arthritis, and systemic lupus erythematosus.[1][4]

Autoimmune diseases are conditions in which the human immune system attacks healthy human tissues within the body. The exact genes responsible for causing each autoimmune disease have not been completely isolated. However, several experimental methods such as the genome-wide association scans have been used to identify certain genetic risk variants.[12] Research focusing on both genome scanning and family trait inheritance analysis has enabled scientists to further understand the etiology of autoimmune diseases such as Type 1 diabetes and Rheumatoid arthritis.[13]

Chemicals can be found within the direct environment or in the form of drugs, including: hydrazines, hair dyes, trichloroethylene, tartrazines, hazardous wastes, and industrial emissions.[19]

UV radiation is found to be a possible cause of development of the autoimmune disease dermatomyositis,[20] exposure to pesticides plays a role in rheumatoid arthritis development,[21] and vitamin D has been found to be a key in preventing immune dysfunctions in older populations.[22] Infectious agents are considered T cell activators, a step needed for activation of autoimmune diseases. These mechanisms are relatively unknown, but are one of the current theories to explain autoimmune diseases triggered by infection such as Guillain-Barre syndrome and rheumatic fever.[23]

Following are the few examples of autoimmune diseases.

Coeliac disease presents the strongest associations to gastrointestinal and lymphoproliferative cancers.[10] In coeliac disease, the autoimmune reaction is caused by the body’s loss of immune tolerance to ingested gluten, found primarily in wheat, barley, and rye.[10] This explains the increased risk of gastrointestinal cancers, as the gastrointestinal tract includes the esophagus, stomach, small intestine, large intestine, rectum, and anus, all areas that the ingested gluten would traverse in digestion.[10] The incidence of gastrointestinal cancer can be partially reduced or eliminated if a patient removes gluten from their diet.[10][24][25][26][27] Additionally, celiac disease is correlated with lymphoproliferative cancers.[10]

Inflammatory bowel disease is associated with cancers of the gastrointestinal tract and some lymphoproliferative cancers.[10] Inflammatory bowel disease (IBD) can be further categorized as Crohn's disease or ulcerative colitis.[10] In both cases, individuals with IBD lose immune tolerance for normal bacteria present in the gut microbiome.[10] In this case, the immune system attacks the bacteria and induces chronic inflammation, which has been linked to increased cancer risk.[10]

Multiple sclerosis is associated with decreased risk of cancer overall but an increased risk of central nervous system cancer, primarily in the brain.[10] Multiple sclerosis is a neurodegenerative disease in which T-cells – a specific type of immune cells – attack the important myelin sheath in brain neurons.[28] This reduces the nervous system function, creating inflammation and subsequent cancer of the brain.[10]

Rheumatoid arthritis presents mild, yet significant associations with focal cancers all throughout the body as well as lymphoproliferative cancers.[10] In rheumatoid arthritis, cells that make up the body’s joints and cartilages become invasive and induce local inflammation.[10] Additionally, the chronic inflammation and over-activation of the immune system creates an environment that favors further malignant transformation of other cells. This can explain the associations to cancer of the lungs and skin as well as the increased risk of other hematologic cancers none of which are directly affected by the inflammation of joints.[29][30]

Systemic lupus erythematosus is associated with focal cancers throughout the body and lymphoproliferative cancers.[10] Systemic lupus erythematosus affects multiple organ systems and is characterized by a widespread loss of immune tolerance.[31] The chronic inflammation throughout the entire body promotes the malignant transformation of other cells which contributes to the increased risk of systemic and lymphoproliferative cancers.[10] Conversely, systemic lupus erythematosus is correlated with a decrease in some cancers. This is best explained by increased immunosurveillance in these areas, however, the mechanism for why these areas experience lower incidence is poorly understood.[10]

In aplastic anemia the body fails to produce blood cells in sufficient numbers. Blood cells are produced in the bone marrow by stem cells that reside there. Aplastic anaemia causes a deficiency of all blood cell types: red blood cells, white blood cells, and platelets.

Some infections, such as Campylobacter jejuni, have antigens that are similar (but not identical) to our own self-molecules. In this case, a normal immune response to C. jejuni can result in the production of antibodies that also react to a lesser degree with gangliosides of myelin sheath surrounding peripheral nerves' axons (i.e., Guillain–Barré). A major understanding of the underlying pathophysiology of autoimmune diseases has been the application of genome-wide association scans that have identified a degree of genetic sharing among the autoimmune diseases.[32]

Autoimmunity, on the other hand, is the presence of self-reactive immune response (e.g., auto-antibodies, self-reactive T cells), with or without damage or pathology resulting from it.[33] This may be restricted to certain organs (e.g. in autoimmune thyroiditis) or involve a particular tissue in different places (e.g. Goodpasture's disease which may affect the basement membrane in both the lung and the kidney).

There are many theories as to how an autoimmune disease state arises. Some common ones are listed below.

For a disease to be regarded as an autoimmune disease it needs to answer to Witebsky's postulates (first formulated by Ernest Witebsky and colleagues in 1957 and modified in 1994):[34][35]

Symptoms of early autoimmune disease are often the exact same as common illnesses, including: fatigue, fever, malaise, joint pain, and rash. Due to the fact symptoms vary for affected location, disease causing agents, and individuals, it is difficult for proper diagnosis.[36] Typically, diagnosis begins with looking into a patient’s family's history for genetic predisposition. This is combined with various tests, as no single test can identify an autoimmune disease.[19]

A test used to identify abnormal proteins, known as antinuclear antibodies, produced when the body attacks its own tissues.[36][19] It may test positive in several disorders. This test is most useful for diagnosing systemic lupus erythematosus, having a 95% positive test rate.[37]

A test used to measure levels of a protein group of the immune system called complement within blood. If complement is found in low levels, this may be an indication of disease.[36][19]

C reactive protein, a protein made in the liver generally increases with inflammation, and may be high in autoimmune disease.[36][19]

This test measures the rate at which a patient’s blood cells descend in a test tube. More rapid descents may indicate inflammation, a common symptom of autoimmune disease.[19][36]

If these tests are indicative antibody abnormalities and inflammation, further tests will be conducted to identify the autoimmune disease present.[19]

Treatment depends on the type and severity of the condition. The majority of the autoimmune diseases are chronic and there is no definitive cure, but symptoms can be alleviated and controlled with treatment.[7] Overall, the aim of the various treatment methods is to lessen the presented symptoms for relief and manipulate the body’s autoimmune response, while still preserving the ability of the patient to combat diseases that they may encounter.[39] Traditional treatment options may include immunosuppressant drugs to weaken the overall immune response, such as:[40]

Other standard treatment methods include:[7]

Because these drugs aim to reduce the immune response against the body’s own tissues, there are side effects of these traditional treatment methods, such as being more vulnerable to infections that can potentially be life threatening. There are new advancements in medicine for the treatment of autoimmune diseases that are currently being researched, developed, and used today, especially when traditional treatment options fail. These methods aim to either block the activation of pathogenic cells in the body, or alter the pathway that suppresses these cells naturally.[39][41] The goal for these advancements is to have treatment options available that are less toxic to the patient, and have more specific targets.[41] Such options include:

In both autoimmune and inflammatory diseases, the condition arises through aberrant reactions of the human adaptive or innate immune systems. In autoimmunity, the patient's immune system is activated against the body's own proteins. In chronic inflammatory diseases, neutrophils and other leukocytes are constitutively recruited by cytokines and chemokines, resulting in tissue damage.

Stem cell transplantation is being studied and has shown promising results in certain cases.[48]

According to this theory, the effector function of the immune response is mediated by the glycans (polysaccharides) displayed by the cells and humoral components of the immune system. Individuals with autoimmunity have alterations in their glycosylation profile such that a proinflammatory immune response is favored. It is further hypothesized that individual autoimmune diseases will have unique glycan signatures.[49]

According to the hygiene hypothesis, high levels of cleanliness expose children to fewer antigens than in the past, causing their immune systems to become overactive and more likely to misidentify own tissues as foreign, resulting in autoimmune or allergic conditions such as asthma.[50]