Although less common than ICD, ACD is accepted to be the most prevalent form of immunotoxicity found in humans.[1] By its allergic nature, this form of contact dermatitis is a hypersensitive reaction that is atypical within the population. The mechanisms by which these reactions occur are complex, with many levels of fine control. Their immunology centres on the interaction of immunoregulatory cytokines and discrete subpopulations of T lymphocytes.

Other symptoms may include itching, skin redness or inflammation, localized swelling and the area may become more tender or warmer. If left untreated, the skin may darken and become leathery and cracked.[4] Pain can also be present.

The symptoms of allergic contact may persist for as long as one month before resolving completely[clarification needed]. Once an individual has developed a skin reaction to a certain substance it is most likely that they will have it for the rest of their life, and the symptoms will reappear when in contact with the allergen.

Common allergens implicated include the following:

ACD arises as a result of two essential stages: an induction phase, which primes and sensitizes the immune system for an allergic response, and an elicitation phase, in which this response is triggered.[14] As it involves a cell-mediated allergic response, ACD is termed a Type IV delayed hypersensitivity reaction, making it an exception in the usage of the designation "allergic," which otherwise usually refers to type I hypersensitivity reactions.

Contact allergens are essentially soluble haptens (low in molecular weight) and, as such, have the physico-chemical properties that allow them to cross the stratum corneum of the skin. They can only cause their response as part of a complete antigen, involving their association with epidermal proteins forming hapten-protein conjugates. This, in turn, requires them to be protein-reactive.

The conjugate formed is then recognized as a foreign body by the Langerhans cells (LCs) (and in some cases other Dendritic cells (DCs)), which then internalize the protein; transport it via the lymphatic system to the regional lymph nodes; and present the antigen to T-lymphocytes. This process is controlled by cytokines and chemokines – with tumor necrosis factor alpha (TNF-α) and certain members of the interleukin family (1, 13 and 18) – and their action serves either to promote or to inhibit the mobilization and migration of these LCs.[15] As the LCs are transported to the lymph nodes, they become differentiated and transform into DCs, which are immunostimulatory in nature.

White et al. have suggested that there appears to be a threshold to the mechanisms of allergic sensitisation by ACD-associated allergens (1986).[16] This is thought to be linked to the level at which the toxin induces the up-regulation of the required mandatory cytokines and chemokines. It has also been proposed that the vehicle in which the allergen reaches the skin could take some responsibility in the sensitisation of the epidermis by both assisting the percutaneous penetration and causing some form of trauma and mobilization of cytokines itself.

Once an individual is sensitized to an allergen, future contacts with the allergen can trigger a reaction, commonly known as a memory response, in the original site of sensitization. So for example if a person has an allergic contact dermatitis on the eyelids, say from use of makeup, touching the contact allergen with the fingers can trigger an allergic reaction on the eyelids.[citation needed]

This is due to local skin memory T-cells, which remain in the original sensitization site. In a similar fashion, cytotoxic T lymphocytes patrol an area of skin and play an important role in controlling both the reactivation of viruses (such as the "cold sore" virus) and in limiting its replication when reactivated.[17] Memory response, or "Retest Reactivity", usually takes 2 to 3 days after coming in contact with the allergen, and can persist for 2 to 4 weeks.

Diagnosing allergic contact dermatitis is primarily based on physical exam and medical history. In some cases doctors can establish an accurate diagnosis based on the symptoms that the patient experiences and on the rash's appearance. In the case of a single episode of allergic contact dermatitis, this is all that is necessary. Chronic and/or intermittent rashes which are not readily explained by history and physical exam often will benefit from further testing. 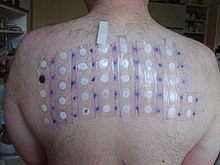 A patch test (contact delayed hypersensitivity allergy test)[18] is a commonly used examination to determine the exact cause of an allergic contact dermatitis. According to the American Academy of Allergy, Asthma, and Immunology, "patch testing is the gold standard for contact allergen identification".[2]

The patch test consists of applying small quantities of potential allergens to small patches and which are then placed on the skin.[19] After two days, they are removed and if a skin reaction occurred to one of the substances applied, a raised bump will be noticeable underneath the patch. The tests are again read at 72 or 96 hours after application.

Patch testing is used for patients who have chronic, recurring contact dermatitis.[2] Other tests that may be used to diagnose contact dermatitis and rule out other potential causes of the symptoms include a skin biopsy and culture of the skin lesion.

The first step in treating the condition is appropriate recognition of the clinical problem, followed by identification of the culprit chemical and the source of that chemical. Corticosteroid creams should be used carefully and according to the prescribed directions because when overused over longer periods of time they can cause thinning of the skin. Also, in some instances such as poison ivy dermatitis calamine lotion and cool oatmeal baths may relieve itching.[20]

Usually, severe cases are treated with systemic corticosteroids which may be tapered gradually, with various dosing schedules ranging from a total of 12 – 20 days to prevent the recurrence of the rash (while the chemical allergen is still in the skin, up to 3 weeks, as well as a topical corticosteroid.[2] Tacrolimus ointment or pimecrolimus cream can also be used additionally to the corticosteroid creams or instead of these. Oral antihistamines such as diphenhydramine or hydroxyzine may also be used in more severe cases to relieve the intense itching via sedation.[21] Topical antihistamines are not advised as there might be a second skin reaction (treatment associated contact dermatitis) from the lotion itself.

The other symptoms caused by allergic contact dermatitis may be eased with cool compresses to stop the itching. It is vital for treatment success that the trigger be identified and avoided. The discomfort caused by the symptoms may be relieved by wearing smooth-textured cotton clothing to avoid frictional skin irritation or by avoiding soaps with perfumes and dyes.

Commonly, the symptoms may resolve without treatment in 2 to 4 weeks but specific medication may hasten the healing as long as the trigger is avoided. Also, the condition might become chronic if the allergen is not detected and avoided.