Esophageal varices are dilated veins under the mucosa in the lower third of the esophagus.[1][3] The first symptom is generally GI bleeding, with vomiting blood, red blood per rectum, or black blood per rectum.[1] Associated symptom may include itchiness, weight lose, and yellowish skin.[1]

The most common cause is cirrhosis, which frequently occur due to alcoholism or viral hepatitis.[1] Other causes include portal vein thrombosis, right-sided heart failure, schistosomiasis, alpha-1 antitrypsin deficiency, and primary biliary cirrhosis.[1] The underlying mechanism involves portal hypertension.[1] Diagnosis is typically by an upper endoscopy.[2]

Treatment of bleeding may include endoscopic band ligation.[1] Other measures may include intravenous fluids, fresh frozen plasma, antibiotics, and octreotide.[1] Esophageal balloon tamponade may be used in cases were other measures are not effective.[1] Longer term management may involved beta blockers or transjugular intrahepatic portosystemic shunt (TIPS).[1] About 5 to 15% of people have bleeding per year.[1] Of those with an episode of bleeding, about 15% die over the next 6 weeks and more than half die within the year.[1]

About 30% of people at the diagnosis of cirrhosis have varices.[1] Males are more commonly affected than females.[1] It is the second most common cause of an upper GI bleed after stomach ulcers.[1] Esophageal varices were described as early as 1859 by Sappey.[4]

Esophageal varices seven days after banding, showing ulceration at the site of banding

The upper two thirds of the esophagus are drained via the esophageal veins, which carry deoxygenated blood from the esophagus to the azygos vein, which in turn drains directly into the superior vena cava. These veins have no part in the development of esophageal varices. The lower one third of the esophagus is drained into the superficial veins lining the esophageal mucosa, which drain into the left gastric vein, which in turn drains directly into the portal vein. These superficial veins (normally only approximately 1 mm in diameter) become distended up to 1–2 cm in diameter in association with portal hypertension.[citation needed]

Normal portal pressure is approximately 9 mmHg compared to an inferior vena cava pressure of 2–6 mmHg. This creates a normal pressure gradient of 3–7 mmHg. If the portal pressure rises above 12 mmHg, this gradient rises to 7–10 mmHg.[5] A gradient greater than 5 mmHg is considered portal hypertension. At gradients greater than 10 mmHg, blood flowing through the hepatic portal system is redirected from the liver into areas with lower venous pressures. This means that collateral circulation develops in the lower esophagus, abdominal wall, stomach, and rectum. The small blood vessels in these areas become distended, becoming more thin-walled, and appear as varicosities.[citation needed]

In situations where portal pressures increase, such as with cirrhosis, there is dilation of veins in the anastomosis, leading to esophageal varices.[6] Splenic vein thrombosis is a rare condition that causes esophageal varices without a raised portal pressure. Splenectomy can cure the variceal bleeding due to splenic vein thrombosis.[citation needed]

Varices can also form in other areas of the body, including the stomach (gastric varices), duodenum (duodenal varices), and rectum (rectal varices). Treatment of these types of varices may differ. In some cases, schistosomiasis also leads to esophageal varices.[citation needed] 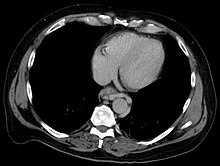 Dilated submucosal veins are the most prominent histologic feature of esophageal varices. The expansion of the submucosa leads to elevation of the mucosa above the surrounding tissue, which is apparent during endoscopy and is a key diagnostic feature. Evidence of recent variceal hemorrhage includes necrosis and ulceration of the mucosa. Evidence of past variceal hemorrhage includes inflammation and venous thrombosis.[citation needed] 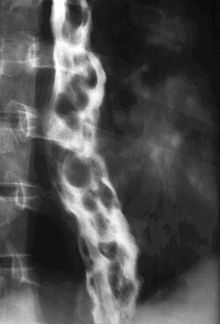 X-ray of a person with dilated, snake like varicose veins in their esophagus secondary to pulmonary hypertension.

In ideal circumstances, people with known varices should receive treatment to reduce their risk of bleeding.[7] The non-selective β-blockers (e.g., propranolol, timolol or nadolol) and nitrates (e.g., isosorbide mononitrate (IMN) have been evaluated for secondary prophylaxis. Non-selective β-blockers (but not cardioselective β-blockers like atenolol) are preferred because they decrease both cardiac output by β1 blockade and splanchnic blood flow by blocking vasodilating β2 receptors at splanchnic vasculature. The effectiveness of this treatment has been shown by a number of different studies.[8]

However, non-selective β-blockers do not prevent the formation of esophageal varices.[9]

When medical contraindications to beta-blockers exist, such as significant reactive airway disease, then treatment with prophylactic endoscopic variceal ligation is often performed.[10]

In emergency situations, care is directed at stopping blood loss, maintaining plasma volume, correcting disorders in coagulation induced by cirrhosis, and appropriate use of antibiotics such as quinolones or ceftriaxone. Blood volume resuscitation should be done promptly and with caution. The goal should be hemodynamic stability and hemoglobin of over 8 g/dl. Resuscitation of all lost blood leads to increase in portal pressure leading to more bleeding. Volume resuscitation can also worsen ascites and increase portal pressure. (AASLD guidelines)[citation needed]

In cases of refractory bleeding, balloon tamponade with a Sengstaken-Blakemore tube may be necessary, usually as a bridge to further endoscopy or treatment of the underlying cause of bleeding (ie: portal hypertension). Esophageal devascularization operations such as the Sugiura procedure can also be used to stop complicated bleeding. Methods of treating the portal hypertension include: transjugular intrahepatic portosystemic shunt (TIPS), distal splenorenal shunt procedure, or liver transplantation.[citation needed]

Nutritional supplementation is necessary if the person has been unable to eat for more than four days.[11]

Terlipressin and octreotide for one to five days have also been used.[12]