Upper gastrointestinal bleeding is bleeding from the esophagus, stomach, or duodenum.[1] Symptoms may include vomiting blood, black stool, abdominal pain, and lightheadedness.[1] Complications may include shock and anemia.[2]

Intravenous fluid replacement, including blood transfusion, may be required.[3] Proton pump inhibitors are generally given.[4] Endoscopy is recommended within 24 hours in those who are unstable, during which bleeding can be stopped by various techniques.[1][5] In those with varices, octreotide may be used.[3] Tranexamic acid has not be found to be useful.[6] Other options may include embolization or surgery.[1] In about 15% of people bleeding reoccurs.[3]

Persons with upper gastrointestinal bleeding often present with hematemesis, coffee ground vomiting, melena, or hematochezia (maroon-coloured stool) if the hemorrhage is severe. The presentation of bleeding depends on the amount and location of hemorrhage. A person with upper gastrointestinal bleeding may also present with complications of anemia, including chest pain, syncope, fatigue and shortness of breath.[citation needed]

The physical examination performed by the physician concentrates on the following things:[citation needed]

Laboratory findings include anemia, coagulopathy, and an elevated BUN-to-creatinine ratio.

Gastric ulcer in antrum of stomach with overlying clot. Pathology was consistent with gastric lymphoma.

A number of medications increase the risk of bleeding including NSAIDs and SSRIs. SSRIs double the rate of upper gastrointestinal bleeding.[8]

People are usually stratified into having either variceal or non-variceal sources of upper gastrointestinal hemorrhage, as the two have different treatment algorithms and prognosis.[citation needed]

The causes for upper gastrointestinal hemorrhage include the following: 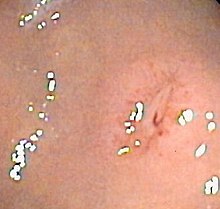 The strongest predictors of an upper gastrointestinal bleed are black stool, age <50 years, and blood urea nitrogen/creatinine ratio 30 or more.[12][13]

The nasogastric aspirate can help determine the location of bleeding and thus direct initial diagnostic and treatment plans. Nasogastric aspirate has a sensitivity of 42%, specificity 91%, negative predictive value 64%, positive predictive value 92% and overall accuracy of 66% in differentiating upper gastrointestinal bleeding from bleeding distal to the ligament of Treitz.[12] A positive aspirate is more helpful than a negative aspirate. A smaller study found a sensitivity of 79% and specificity of 55%, somewhat opposite results from Witting.[14]

Determining whether blood is in gastric contents, either vomited or aspirated specimens, is difficult. Slide tests are based on orthotolidine (Hematest reagent tablets and Bili-Labstix) or guaiac (Hemoccult and Gastroccult). Rosenthal found orthotolidine-based tests more sensitive than specific; the Hemoccult test's sensitivity reduced by the acidic environment; and the Gastroccult test be the most accurate.[15] Cuellar found the following results:

A scoring system called the Glasgow-Blatchford bleeding score found 16% of people presenting with upper gastrointestinal bleed had Glasgow-Blatchford score of "0", considered low. Among these people there were no deaths or interventions needed and they were able to be effectively treated in an outpatient setting.[17][18]

Score is equal to "0" if the following are all present:

The Rockall score may also be used to predict the risk of further bleeding and death.[3]

The initial focus is on resuscitation beginning with airway management and fluid resuscitation using either intravenous fluids and or blood.[19] A number of medications may improve outcomes depending on the source of the bleeding.[19] Although proton pump inhibitors are often given in the emergent setting, there is no evidence that these medications decrease death rates, re-bleeding events, or needs for surgical interventions.[20] After the initial resuscitation has been completed, treatment is instigated to limit the likelihood of rebleeds and correct any anaemia that the bleeding may have caused. Those with a Glasgow Blatchford score less than 2 may not require admission to hospital.[21]

Based on evidence from people with other health problems crystalloid and colloids are believed to be equivalent for peptic ulcer bleeding.[19] In people with a confirmed peptic ulcer, proton pump inhibitors (PPIs) do not reduce death rates, later bleeding events, or need for surgery.[22] They may decrease signs of bleeding at endoscopy; however, and are generally recommended at a high dose for at least 72 hours.[22][1] The effectiveness of intravenous and by mouth PPIs appear similar.[1] In those with less severe disease and where endoscopy is rapidly available, they are of less clinical importance.[23] Tranexamic acid has not been found to be useful.[6] Somatostatin and octreotide while recommended for variceal bleeding have not been found to be of general use for non-variceal bleeds.[19] 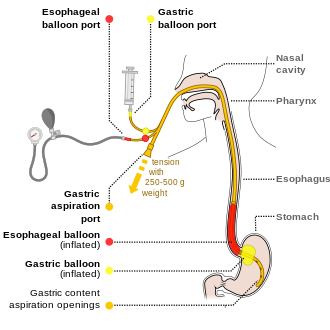 For initial fluid replacement colloids or albumin is preferred in people with cirrhosis.[19] Medications typically includes octreotide or if not available vasopressin and nitroglycerin to reduce portal pressures.[24] This is typically in addition to endoscopic banding or sclerotherapy for the varices.[24] If this is sufficient then beta blockers and nitrates may be used for the prevention of re-bleeding.[24] If bleeding continues then esophageal balloon tamponade with a Sengstaken-Blakemore tube or Minnesota tube may be used in an attempt to mechanically compress the varices.[24] This may then be followed by a transjugular intrahepatic portosystemic shunt.[24]

If large amounts of pack red blood cells are used additional platelets and fresh frozen plasma should be administered to prevent blood clotting problems.[19] Some evidence supports holding off on blood transfusions in those who have a hemoglobin greater than 7 to 8 g/dL and only moderate bleeding.[19][25][1] If the INR is greater than 1.5 to 1.8 correction with fresh frozen plasma or prothrombin complex may decrease mortality.[19] Those with an INR of greater than 2.5, should have this addressed before endoscopy.[1] 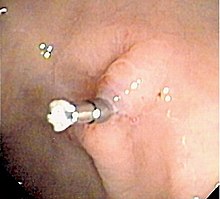 The above ulcer seen after endoscopic clipping

The benefits versus risks of placing a nasogastric tube in those with upper gastrointestingal bleeding are not determined.[19] Endoscopy within 24 hours is recommended.[19] Prokinetic agents such as erythromycin before endoscopy can decrease the amount of blood in the stomach and thus improve the operators view.[19] Early endoscopy decreases hospital time and the amount of blood transfusions needed.[19] Proton pump inhibitors, if they have not been started earlier, are recommended in those in whom high risk signs for bleeding are found.[19] It is also recommended that people with high risk signs are kept in hospital for at least 72 hours.[19] Blood is not recommended to correct anaemia, unless the patient is cardiovascularly unstable as this can worsen outcomes.[25] Oral iron can be used, but this can lead to problems with compliance, tolerance, darkening stools which may mask evidence of rebleeding and tends to be slow, especially if used in conjunction with proton pump inhibitors. Parenteral Iron is increasingly used in these cases to improve patient outcomes and void blood usage.[citation needed]

Depending on its severity, upper gastrointestinal bleeding may carry an estimated mortality risk of 11%.[26] However, survival has improved to about 2 percent, likely as a result of improvements in medical therapy and endoscopic control of bleeding.[27]