Risk factors for acute mesenteric ischemia include atrial fibrillation, heart failure, chronic kidney failure, being prone to forming blood clots, and previous myocardial infarction.[2] There are four mechanisms by which poor blood flow occurs: a blood clot from elsewhere getting lodged in an artery, a new blood clot forming in an artery, a blood clot forming in the superior mesenteric vein, and insufficient blood flow due to low blood pressure or spasms of arteries.[3][6] Chronic disease is a risk factor for acute disease.[7] The best method of diagnosis is angiography, with computed tomography (CT) being used when that is not available.[1]

Treatment of acute ischemia may include stenting or medications to break down the clot provided at the site of obstruction by interventional radiology.[1] Open surgery may also be used to remove or bypass the obstruction and may be required to remove any intestines that may have died.[2] If not rapidly treated outcomes are often poor.[1] Among those affected even with treatment the risk of death is 70% to 90%.[3] In those with chronic disease bypass surgery is the treatment of choice.[1] Those who have thrombosis of the vein may be treated with anticoagulation such as heparin and warfarin, with surgery used if they do not improve.[2][8]

While not always present and often overlapping, three progressive phases of mesenteric ischemia have been described:[9][10]

Symptoms of mesenteric ischemia vary and can be acute (especially if embolic),[11] subacute, or chronic.[12] 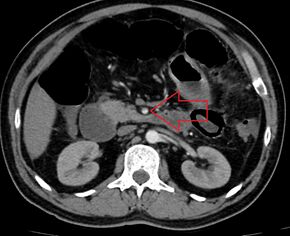 In a series of 58 patients with mesenteric ischemia due to mixed causes:[14]

A number of devices have been used to assess the sufficiency of oxygen delivery to the colon. The earliest devices were based on tonometry, and required time to equilibrate and estimate the pHi, roughly an estimate of local CO2 levels. The first device approved by the U.S. FDA (in 2004) used visible light spectroscopy to analyze capillary oxygen levels. Use during aortic aneurysm repair detected when colon oxygen levels fell below sustainable levels, allowing real-time repair. In several studies, specificity has been 83% for chronic mesenteric ischemia and 90% or higher for acute colonic ischemia, with a sensitivity of 71%-92%. This device must be placed using endoscopy, however.[19][20][21]

Findings on gastroscopy may include edematous gastric mucosa,[22] and hyperperistalsis.[23]

Finding on colonoscopy may include: fragile mucosa,[24] segmental erythema,[25] longitudinal ulcer,[26] and loss of haustrations[27]

Computed tomography (CT scan) is often used.[29][30] The accuracy of the CT scan depends on whether a small bowel obstruction (SBO) is present.[31]

Early findings on CT scan include:

In embolic acute mesenteric ischemia, CT-Angiography can be of great value for diagnosis and treatment. It may reveal the emboli itself lodged in the superior mesenteric artery, as well as the presence or absence of distal mesenteric branches. [18]

The treatment of mesenteric ischemia depends on the cause, and can be medical or surgical. However, if bowel has become necrotic, the only treatment is surgical removal of the dead segments of bowel.

In non-occlusive mesenteric ischemia, where there is no blockage of the arteries supplying the bowel, the treatment is medical rather than surgical. People are admitted to the hospital for resuscitation with intravenous fluids, careful monitoring of laboratory tests, and optimization of their cardiovascular function. NG tube decompression and heparin anticoagulation may also be used to limit stress on the bowel and optimize perfusion, respectively.

Surgical revascularisation remains the treatment of choice for mesenteric ischaemia related to an occlusion of the vessels supplying the bowel, but thrombolytic medical treatment and vascular interventional radiological techniques have a growing role.[34]

If the ischemia has progressed to the point that the affected intestinal segments are gangrenous, a bowel resection of those segments is called for. Often, obviously dead segments are removed at the first operation, and a second-look operation is planned to assess segments that are borderline that may be savable after revascularization.[35]

The prognosis depends on prompt diagnosis (less than 12–24 hours and before gangrene)[36] and the underlying cause:[37]

In the case of prompt diagnosis and therapy, acute mesenteric ischemia can be reversible.[38]