Carotid artery stenosis is a narrowing of any part of the carotid arteries.[1] Often there is no symptoms;[1] though with severe narrowing stroke-like symptoms may occur.[2] Complications may include stroke or transient ischemic attack (TIA).[2]

The plaque can be stable and asymptomatic, or it can be a source of embolization. Emboli break off from the plaque and travel through the circulation to blood vessels in the brain. As the vessels get smaller, an embolus can lodge in the vessel wall and restrict the blood flow to parts of the brain. This ischemia can either be temporary, yielding a transient ischemic attack, or permanent resulting in a thromboembolic stroke.[citation needed]

Risk of stroke from carotid artery stenosis is evaluated by the presence or absence of symptoms and the degree of stenosis on imaging.

Transient ischemic attacks (TIAs) are a warning sign, and may be followed by severe permanent strokes, particularly within the first two days. TIAs by definition last less than 24 hours and frequently take the form of a weakness or loss of sensation of a limb or the trunk on one side of the body, or the loss of sight (amaurosis fugax) in one eye. Less common symptoms are artery sounds (bruits), or ringing in the ears (tinnitus).[citation needed]

Atherosclerosis causes plaque to form within the carotid artery walls, usually at the fork where the common carotid artery divides into the internal and external carotid artery. The plaque build up can narrow or constrict the artery lumen, a condition called stenosis. Rupture of the plaque can cause the formation of a blood clot in the artery. A piece of the formed blood clot often breaks off and travels (embolizes) up through the internal carotid artery into the brain, where it blocks circulation, and can cause death of the brain tissue, a condition referred to as ischemic stroke.[citation needed]

Sometimes the stenosis causes temporary symptoms first, known as TIAs, where temporary ischemia occurs in the brain, spinal cord, or retina without causing an infarction.[5] Symptomatic stenosis has a high risk of stroke within the next 2 days. National Institute for Health and Clinical Excellence (NICE) guidelines recommend that people with moderate to severe (50–99% blockage) stenosis, and symptoms, should have "urgent" endarterectomy within 2 weeks.[6]

When the plaque does not cause symptoms, people are still at higher risk of stroke than the general population, but not as high as people with symptomatic stenosis. The incidence of stroke, including fatal stroke, is 1–2% per year. The surgical mortality of endarterectomy ranges from 1–2% to as much as 10%. Two large randomized clinical trials have demonstrated that carotid surgery done with a 30-day stroke and death risk of 3% or less will benefit asymptomatic people with ≥60% stenosis who are expected to live at least 5 years after surgery.[7][8] Surgeons are divided over whether asymptomatic people should be treated with medication alone or should have surgery.[9][10]

70 percent stenosis of the right internal carotid artery as seen by ultrasound. Arrow marks the lumen of the artery. 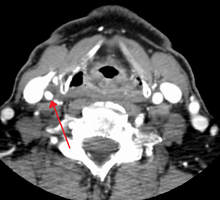 Carotid artery stenosis is usually diagnosed by color flow duplex ultrasound scan of the carotid arteries in the neck. This involves no radiation, no needles and no contrast agents that may cause allergic reactions. This test has good sensitivity and specificity.[11]

Typically duplex ultrasound scan is the only investigation required for decision making in carotid stenosis as it is widely available and rapidly performed. However, further imaging can be required if the stenosis is not near the bifurcation of the carotid artery.[citation needed]

One of several different imaging modalities, such as a computed tomography angiogram (CTA)[12][13][14] or magnetic resonance angiogram (MRA) may be useful. Each imaging modality has its advantages and disadvantages - Magnetic resonance angiography and CT angiography with contrast is contraindicated in patients with chronic kidney disease, catheter angiography has a 0.5% to 1.0% risk of stroke, MI, arterial injury or retroperitoneal bleeding. The investigation chosen will depend on the clinical question and the imaging expertise, experience and equipment available.[15]

For purposed of treatment, the degree of carotid stenosis is defined as:

The U.S. Preventive Services Task Force (USPSTF) recommends against routine screening for carotid artery stenosis in those without symptoms as of 2021.[16]

While routine population screening is not advised, the American Heart Association recommends screening in those diagnosed with related medical conditions or have risk factors for carotid artery disease.[17] Screening is recommended for people who have:

The American Heart Association also recommends screening if a physician detects a carotid bruit, or murmur, over the carotid artery by listening through a stethoscope during a physical exam.[citation needed]

The goal of treating carotid artery stenosis is to reduce the risk of stroke. The type of treatment depends on the severity of the disease and includes:[citation needed]

Clinical guidelines (such as those of the American Heart Association (AHA)[18] and National Institute for Clinical Excellence (NICE)[19]) recommend that all patients with carotid stenosis be given medication, usually blood pressure lowering medications, anti-clotting medications, anti-platelet medications (such as aspirin or clopidogrel), and especially statins (which were originally prescribed for their cholesterol-lowering effects but were also found to reduce inflammation and stabilize plaque).[citation needed]

According to the American Heart Association, interventions beyond medical management is based upon whether patients have symptoms:[citation needed]