Varicose veins are superficial veins that have become enlarged and twisted.[2][1] Typically they occur just under the skin in the legs.[3] Usually they result in few symptoms but some may experience fullness or pain in the area.[2] Complications may include bleeding or superficial thrombophlebitis.[2][1] When varices occur in the scrotum it is known as a varicocele while those around the anus are known as hemorrhoids.[1] Varicose veins may negatively affect quality of life due to their physical, social and psychological effects.[5]

Often there is no specific cause.[2] Risk factors include obesity, not enough exercise, leg trauma, and a family history of the condition.[3] They also occur more commonly in pregnancy.[3] Occasionally they result from chronic venous insufficiency.[2] The underlying mechanism involves weak or damaged valves in the veins.[1] Diagnosis is typically by examination and may be supported by ultrasound.[2] In contrast spider veins involve the capillaries and are smaller.[1][6]

Varicose veins are very common, affecting about 30% of people at some point in time.[3][7] They become more common with age.[3] Women are affected about twice as often as men.[6] Varicose veins have been described throughout history and have been treated with surgery since at least A.D. 400.[8]

Most varicose veins are reasonably benign, but severe varicosities can lead to major complications, due to the poor circulation through the affected limb. 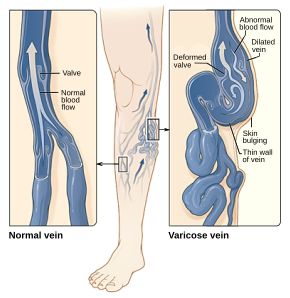 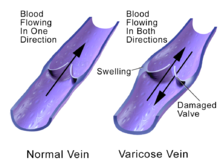 Comparison of healthy and varicose veins

Varicose veins are more common in women than in men and are linked with heredity.[12] Other related factors are pregnancy, obesity, menopause, aging, prolonged standing, leg injury and abdominal straining. Varicose veins are unlikely to be caused by crossing the legs or ankles.[13] Less commonly, but not exceptionally, varicose veins can be due to other causes, such as post-phlebitic obstruction or incontinence, venous and arteriovenous malformations.[14]

Varicose veins could also be caused by hyperhomocysteinemia in the body, which can degrade and inhibit the formation of the three main structural components of the artery: collagen, elastin and the proteoglycans. Homocysteine permanently degrades cysteine disulfide bridges and lysine amino acid residues in proteins, gradually affecting function and structure. Simply put, homocysteine is a 'corrosive' of long-living proteins, i.e. collagen or elastin, or lifelong proteins, i.e. fibrillin. These long-term effects are difficult to establish in clinical trials focusing on groups with existing artery decline. Klippel–Trenaunay syndrome and Parkes Weber syndrome are relevant for differential diagnosis.

Another cause is chronic alcohol consumption due to the vasodilatation side effect in relation to gravity and blood viscosity.[21]

Clinical tests that may be used include:

Further information: Ultrasonography of chronic insufficiency of the legs

Traditionally, varicose veins were investigated using imaging techniques only if there was a suspicion of deep venous insufficiency, if they were recurrent, or if they involved the saphenopopliteal junction. This practice is now less widely accepted. People with varicose veins should now be investigated using lower limbs venous ultrasonography. The results from a randomised controlled trial on patients with and without routine ultrasound have shown a significant difference in recurrence rate and reoperation rate at 2 and 7 years of follow-up.[22][unreliable medical source?]

The CEAP (Clinical, Etiological, Anatomical, and Pathophysiological) Classification, developed in 1994 by an international ad hoc committee of the American Venous Forum, outlines these stages[23][24]

Each clinical class is further characterised by a subscript depending upon whether the patient is symptomatic (S) or asymptomatic (A), e.g. C2S.[25]

Treatment can be either conservative or active.

Active treatments can be divided into surgical and non-surgical treatments. Newer methods including endovenous laser treatment, radiofrequency ablation and foam sclerotherapy appear to work as well as surgery for varices of the greater saphenous vein.[26]

The National Institute for Health and Clinical Excellence (NICE) produced clinical guidelines in July 2013 recommending that all people with symptomatic varicose veins (C2S) and worse should be referred to a vascular service for treatment.[27] Conservative treatments such as support stockings should not be used unless treatment was not possible.

The symptoms of varicose veins can be controlled to an extent with the following:

Stripping consists of removal of all or part the saphenous vein (great/long or lesser/short) main trunk. The complications include deep vein thrombosis (5.3%),[30] pulmonary embolism (0.06%), and wound complications including infection (2.2%). There is evidence for the great saphenous vein regrowing after stripping.[31] For traditional surgery, reported recurrence rates, which have been tracked for 10 years, range from 5% to 60%. In addition, since stripping removes the saphenous main trunks, they are no longer available for use as venous bypass grafts in the future (coronary or leg artery vital disease).[32]

Other surgical treatments are:

A commonly performed non-surgical treatment for varicose and "spider" leg veins is sclerotherapy, in which medicine (sclerosant) is injected into the veins to make them shrink. The medicines that are commonly used as sclerosants are polidocanol (POL branded Asclera in the United States, Aethoxysklerol in Australia), sodium tetradecyl sulphate (STS), Sclerodex (Canada), Hypertonic Saline, Glycerin and Chromated Glycerin. STS (branded Fibrovein in Australia) liquids can be mixed at varying concentrations of sclerosant and varying sclerosant/gas proportions, with air or CO2 or O2 to create foams. Foams may allow more veins to be treated per session with comparable efficacy. Their use in contrast to liquid sclerosant is still somewhat controversial. Sclerotherapy has been used in the treatment of varicose veins for over 150 years.[11] Sclerotherapy is often used for telangiectasias (spider veins) and varicose veins that persist or recur after vein stripping.[35][36] Sclerotherapy can also be performed using foamed sclerosants under ultrasound guidance to treat larger varicose veins, including the great saphenous and small saphenous veins.[37][38]

A 1996 study reported a 76% success rate at 24 months in treating saphenofemoral junction and great saphenous vein incompetence with STS 3% solution.[39] A Cochrane Collaboration review[36] concluded sclerotherapy was better than surgery in the short term (1 year) for its treatment success, complication rate and cost, but surgery was better after 5 years, although the research is weak.[40] A Health Technology Assessment found that sclerotherapy provided less benefit than surgery, but is likely to provide a small benefit in varicose veins without reflux.[41] This Health Technology Assessment monograph included reviews of epidemiology, assessment, and treatment, as well as a study on clinical and cost effectiveness of surgery and sclerotherapy.

Complications of sclerotherapy are rare but can include blood clots and ulceration. Anaphylactic reactions are "extraordinarily rare but can be life-threatening," and doctors should have resuscitation equipment ready.[42][43] There has been one reported case of stroke after ultrasound-guided sclerotherapy when an unusually large dose of sclerosant foam was injected.

The Australian Medical Services Advisory Committee (MSAC) in 2008 determined that endovenous laser treatment/ablation (ELA) for varicose veins "appears to be more effective in the short term, and at least as effective overall, as the comparative procedure of junction ligation and vein stripping for the treatment of varicose veins."[45] It also found in its assessment of available literature, that "occurrence rates of more severe complications such as DVT, nerve injury, and paraesthesia, post-operative infections, and haematomas, appears to be greater after ligation and stripping than after EVLT". Complications for ELA include minor skin burns (0.4%)[46] and temporary paresthesia (2.1%). The longest study of endovenous laser ablation is 39 months.

Two prospective randomized trials found speedier recovery and fewer complications after radiofrequency ablation (ERA) compared to open surgery.[47][48] Myers[49] wrote that open surgery for small saphenous vein reflux is obsolete. Myers said these veins should be treated with endovenous techniques, citing high recurrence rates after surgical management, and risk of nerve damage up to 15%. By comparison ERA has been shown to control 80% of cases of small saphenous vein reflux at 4 years, said Myers. Complications for ERA include burns, paraesthesia, clinical phlebitis and slightly higher rates of deep vein thrombosis (0.57%) and pulmonary embolism (0.17%). One 3-year study compared ERA, with a recurrence rate of 33%, to open surgery, which had a recurrence rate of 23%.

Steam treatment consists in injection of pulses of steam into the sick vein. This treatment which works with a natural agent (water) has similar results than laser or radiofrequency.[50] The steam presents a lot of post-operative advantages for the patient (good aesthetic results, less pain, etc.)[51]

ELA and ERA require specialized training for doctors and special equipment. ELA is performed as an outpatient procedure and does not require an operating theatre, nor does the patient need a general anaesthetic. Doctors use high-frequency ultrasound during the procedure to visualize the anatomical relationships between the saphenous structures. Some practitioners also perform phlebectomy or ultrasound guided sclerotherapy at the time of endovenous treatment. Follow-up treatment to smaller branch varicose veins is often needed in the weeks or months after the initial procedure. Steam is a very promising treatment for both doctors (easy introduction of catheters, efficient on recurrences, ambulatory procedure, easy and economic procedure) and patients (less post-operative pain, a natural agent, fast recovery to daily activities).

This condition is most common after age 50.[52] It is more prevalent in females. There is a hereditary role. It has been seen in smokers, those who have chronic constipation, and in people with occupations which necessitate long periods of standing such as lecturers, nurses, conductors (musical and bus), stage actors, umpires (cricket, javelin, etc.), the Queen's guard, lectern orators, security guards, traffic police officers, vendors, surgeons, etc.[53]