Primary sclerosing cholangitis (PSC) is a long-term disease in which the bile ducts inside and outside the liver become inflamed and scarred, and are eventually narrowed or blocked.[2] Many people initially have no symptoms; however over time may develop liver disease with yellow discoloration of the skin and eyes, itching, and right upper abdominal pain.[1] Complications may include liver failure, gallbladder cancer, bile duct cancer, bile duct infection, and fat soluble vitamin deficiencies.[2][1]

The cause is unknown.[1] In approximately 70% of cases the person has inflammatory bowel disease (IBD), most often ulcerative colitis (UC) and conversely about 7.5% of people with UC have PSC.[2][1] Other risk factors include a family history of the disease and being a nonsmoker.[1] The underlying mechanism is believed to be that of an autoimmune disease.[2] Diagnosis may be made based a persistently elevated alkaline phosphatase and MRCP after ruling out other possible causes.[1]

There is no cure.[1] Efforts to slow the disease may include the use of immunosuppressants.[1] Cholestyramine or naltrexone may be used to improve itchiness.[1] A liver transplant is eventually required in about 40% of people, and despite transplantation the disease recurs in 25% of cases.[3] Without a liver transplant the typical life expectancy is 10 years.[1]

PSC is a rare, affecting about 11 per 100,000 people.[2] Onset is usually in peoples 30s or 40s.[2] People of Northern European ancestry are more commonly affected than those of Asian descent. Males are affected twice as often as females.[2][1]The disease was first described in the mid-1800s but was not fully characterized until the 1970s.[4]

Yellowing of the skin (jaundice) and eyes (scleral icterus).

Nearly half of people with PSC do not have symptoms and are often incidentally discovered to have PSC due to abnormal liver function tests,[3] but a substantial proportion will have debilitating signs and symptoms of the disease.[5] Signs and symptoms of PSC may include severe itching and non-specific fatigue. Yellowing of the skin and white portion of the eyes may also be seen. Enlargement of the liver and spleen are seen in approximately 40% of affected individuals. Abdominal pain affects about 20% of people with PSC.

Multiple episodes of life-threatening acute cholangitis (infection within the bile ducts) can be seen due to impaired drainage of the bile ducts, which increases the risk of infection.[6]

The exact cause of primary sclerosing cholangitis is unknown and its pathogenesis is poorly understood.[3] Although PSC is thought to be an autoimmune disease, it does not demonstrate a clear response to immunosuppressants. Thus, many experts believe it to be a complex, multifactorial (including immune-mediated) disorder and perhaps one that encompasses several different hepatobiliary diseases.[8][9]

In addition, there are longstanding, well-recognized associations between PSC and human leukocyte antigen (HLA) alleles (A1, B8, and DR3).[10]

PSC is characterized by inflammation of the bile ducts (cholangitis) with consequent stricturing (i.e., narrowing) and hardening (sclerosis) of these ducts due to scar formation, be it inside and/or outside the liver.[11] The resulting scarring of the bile ducts obstructs the flow of bile, which further perpetuates bile duct and liver injury. Chronic impairment of bile flow due to blockage and dysfunctional bile transport (cholestasis) causes progressive biliary fibrosis and ultimately biliary cirrhosis and liver failure.[12]

The primary physiological function of bile is to assist in the breakdown and absorption of fat in the intestinal tract; a relative deficiency of bile can lead to fat malabsorption and deficiencies of fat-soluble vitamins (A, D, E, K).[citation needed]

Liver enlargement is seen due to portal hypertension caused by compression of portal veins by the proximate sclerosed intrahepatic bile ducts, and leads to right upper quadrant abdominal pain.

Data has suggested an important association between the intestinal microbiota and PSC[13][14][15] and a process referred to as cellular senescence and the senescence-associated secretory phenotype (SASP) in the pathogenesis of PSC.[16][17]

CT scan findings in a case of primary sclerosing cholangitis. 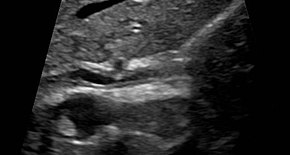 Ultrasound of sclerosing cholangitis in the common bile duct

PSC is generally diagnosed on the basis of having at least two of three clinical criteria after secondary causes of sclerosing cholangitis have been ruled out:

Historically, a cholangiogram would be obtained via endoscopic retrograde cholangiopancreatography (ERCP), which typically reveals "beading" (alternating strictures and dilation) of the bile ducts inside and/or outside the liver. Currently, the preferred option for diagnostic cholangiography, given its non-invasive yet highly accurate nature, is magnetic resonance cholangiopancreatography (MRCP), a magnetic resonance imaging technique. MRCP has unique strengths, including high spatial resolution, and can even be used to visualize the biliary tract of small animal models of PSC.[18]

Most people with PSC have evidence of autoantibodies and abnormal immunoglobulin levels.[19] For example, approximately 80% of people with PSC have perinuclear anti-neutrophil cytoplasmic antibodies (P-ANCA); however, this and other immunoglobulin findings are not specific to those with PSC and are of unclear clinical significance/consequence. Antinuclear antibodies and anti-smooth muscle antibody are found in 20%-50% of PSC patients and, likewise, are not specific for the disease but may identify a subgroup of PSC patients who also have autoimmune hepatitis (i.e. PSC-AIH overlap syndrome).[10]

Other markers which may be measured and monitored are a complete blood count, serum liver enzymes, bilirubin levels (usually grossly elevated), kidney function, and electrolytes. Fecal fat measurement is occasionally ordered when symptoms of malabsorption (e.g., gross steatorrhea) are prominent.

Primary sclerosing cholangitis is typically classified into three subgroups based on whether the small and/or large bile ducts are affected. The subgroups of PSC include the following:[3]

No medication is approved for PSC in the USA. Some experts recommend a trial of ursodeoxycholic acid (UDCA), a bile acid occurring naturally in small quantities in humans, as it has been shown to lower elevated liver enzyme numbers in patients with PSC and has proven effective in other cholestatic liver diseases. However, UDCA has yet to be shown to clearly lead to improved liver histology and survival.[5][23] Guidelines from the American Association for the Study of Liver Diseases and the American College of Gastroenterology do not support the use of UDCA but guidelines from the European Association for the Study of the Liver do endorse the use of moderate doses (13-15 milligrams per kilogram) of UDCA for PSC.[3][24][25][26]

Supportive treatment for symptoms is the cornerstone of management. These therapies are aimed at relieving symptoms such as itching with antipruritics (e.g. bile acid sequestrants such as cholestyramine); antibiotics to treat episodes of ascending cholangitis; and vitamin supplements, as people with PSC are often deficient in fat-soluble vitamins (vitamin A, vitamin D, vitamin E, and vitamin K).[27]

ERCP and specialized techniques may also be needed to help distinguish between a benign PSC stricture and a bile duct cancer (cholangiocarcinoma).[28]

Estimated median survival from diagnosis until liver transplant or PSC-related death is 21.3 years.[29] Various models have been developed to help predict survival, but their use is generally best suited for research and not clinical purposes. A serum alkaline phosphatase less than 1.5 times the upper limit of normal has been associated with better outcomes but its utility in predicting long-term outcomes is unclear.[3]

The development of any of the cancers associated with PSC predicts a poor prognosis. Complications from PSC-associated cancers account for 40% of deaths from PSC.[30] Primary sclerosing cholangitis is one of the major known risk factors for cholangiocarcinoma,[31] a cancer of the biliary tree, for which the lifetime risk among patients with PSC is 10-15%.[32] This represents a 400-fold greater risk of developing cholangiocarcinoma compared to the general population.[3] Surveillance for cholangiocarcinoma in patients with PSC is encouraged, with some experts recommending annual surveillance with a specialized imaging study and serum markers,[33] although consensus regarding the modality and interval has yet to be established.[citation needed] Similarly, a screening colonoscopy is recommended in people who receive a new diagnosis of primary sclerosing cholangitis since their risk of colorectal cancer is 10 times higher than that of the general population.[3]

PSC is strongly associated with inflammatory bowel disease (IBD), in particular ulcerative colitis (UC) and to a lesser extent Crohn's disease. As many as 5% of patients with IBD are co-diagnosed with PSC[34] and approximately 70% of people with PSC have IBD.[12] Of note, the presence of colitis appears to be associated with a greater risk of liver disease progression and bile duct cancer (cholangiocarcinoma) development, although this relationship remains poorly understood.[35] Close monitoring of PSC patients is vital.

There is a 2-3:1 male-to-female predilection in primary sclerosing cholangitis.[12] PSC can affect men and women at any age, although it is commonly diagnosed in the fourth decade of life, most often in the presence of inflammatory bowel disease (IBD).[11] PSC progresses slowly and is often asymptomatic, so it can be present for years before it is diagnosed and before it causes clinically significant consequences. There is relatively little data on the prevalence and incidence of primary sclerosing cholangitis, with studies in different countries showing annual incidence of 0.068–1.3 per 100,000 people and prevalence 0.22–8.5 per 100,000; given that PSC is closely linked with ulcerative colitis, it is likely that the risk is higher in populations where UC is more common.[36] In the United States, an estimated 29,000 individuals have PSC.[3]

Although there is no curative treatment, several clinical trials are underway that aim to slow progression of this liver disease.[37] Obeticholic acid is being investigated as a possible treatment for PSC due to its antifibrotic effects. Simtuzumab is a monoclonal antibody against the pro-fibrotic enzyme LOXL2 that is being developed as a possible therapy for PSC.[3]