The initial treatment for VTE is typically either low-molecular-weight heparin (LMWH) or unfractionated heparin, or increasingly with direct acting oral anticoagulants (DOAC). Those initially treated with heparins can be switched to other anticoagulants (warfarin, DOACs), although pregnant women and some people with cancer receive ongoing heparin treatment. Superficial venous thrombosis or phlebitis affects the superficial veins of the upper or lower extremity and only require anticoagulation in specific situations, and may be treated with anti-inflammatory pain relief only.

Superficial venous thromboses cause discomfort but generally not serious consequences, as do the deep vein thromboses (DVTs) that form in the deep veins of the legs or in the pelvic veins. Nevertheless, they can progress to the deep veins through the perforator veins or, they can be responsible for a lung embolism mainly if the head of the clot is poorly attached to the vein wall and is situated near the sapheno-femoral junction.[citation needed]

When a blood clot breaks loose and travels in the blood, this is called a thromboembolism. The abbreviation DVT/PE refers to a VTE where a deep vein thrombosis (DVT) has moved to the lungs (PE or pulmonary embolism).[4]

Since the veins return blood to the heart, if a piece of a blood clot formed in a vein breaks off it can be transported to the right side of the heart, and from there into the lungs. A piece of thrombus that is transported in this way is an embolus: the process of forming a thrombus that becomes embolic is called a thromboembolism. An embolism that lodges in the lungs is a pulmonary embolism (PE). A pulmonary embolism is a very serious condition that can be fatal depending on the dimensions of the embolus.[citation needed] 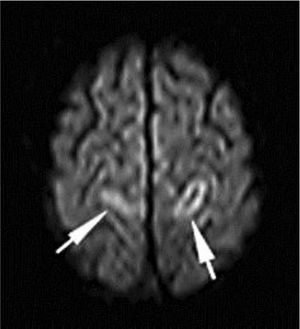 Systemic embolism of venous origin can occur in patients with an atrial or ventricular septal defect, or an arteriovenous connection in the lung, through which an embolus may pass into the arterial system. Such an event is termed a paradoxical embolism. When this affects the blood vessels of the brain it can cause stroke.[6]

Venous thrombi are caused mainly by a combination of venous stasis and hypercoagulability—but to a lesser extent endothelial damage and activation.[7] The three factors of stasis, hypercoagulability, and alterations in the blood vessel wall represent Virchow's triad, and changes to the vessel wall are the least understood.[8] Various risk factors increase the likelihood of any one individual developing a thrombosis:

Red blood cells and fibrin are the main components of venous thrombi,[7] and the thrombi appear to attach to the blood vessel wall endothelium, normally a non-thrombogenic surface, with fibrin.[26] Platelets in venous thrombi attach to downstream fibrin, while in arterial thrombi, they compose the core.[26] As a whole, platelets constitute less of venous thrombi when compared to arterial ones.[7] The process is thought to be initiated by tissue factor-affected thrombin production, which leads to fibrin deposition.[8]

The valves of veins are a recognized site of VT initiation. Due to the blood flow pattern, the base of the valve sinus is particularly deprived of oxygen (hypoxic). Stasis exacerbates hypoxia, and this state is linked to the activation of white blood cells (leukocytes) and the endothelium. Specifically, the two pathways of hypoxia-inducible factor-1 (HIF-1) and early growth response 1 (EGR-1) are activated by hypoxia, and they contribute to monocyte and endothelial activation. Hypoxia also causes reactive oxygen species (ROS) production that can activate HIF-1, EGR-1, and nuclear factor-κB (NF-κB), which regulates HIF-1 transcription.[8]

HIF-1 and EGR-1 pathways lead to monocyte association with endothelial proteins, such as P-selectin, prompting monocytes to release tissue factor-filled microvesicles, which presumably initiate fibrin deposition (via thrombin) after binding the endothelial surface.[8]

The evaluation of venous thrombosis is done via exclusion of other pathologies, as well as:[27]

Numerous medications have been shown to reduce the risk of a person having a VTE, however careful decision making is required in order to decide if a person's risk of having a VTE outweighs the risks associated with most thromboprophylaxis treatment approaches (medications to prevent venous thrombosis). It is recommended that people should be assessed at their hospital discharge for persistent high-risk of venous thrombosis and that people who adopt a heart-healthy lifestyle might lower their risk of venous thrombosis.[28] Clinical policy from the American College of Physicians states a lack of support for any performance measures that incentivize physicians to apply universal prophylaxis without regard to the risks.[29]

Evidence supports the use of heparin in people following surgery who have a high risk of thrombosis to reduce the risk of DVTs; however, the effect on PEs or overall mortality is not known.[30] In hospitalized non-surgical patients, mortality does not appear to change.[31][32][33] It does not appear, however, to decrease the rate of symptomatic DVTs.[31] Using both heparin and compression stockings appears better than either one alone in reducing the rate of DVT.[34]

In adults who have had their lower leg casted, braced, or otherwise immobilized for more than a week, LMWH may decrease the risk and severity of deep vein thrombosis, but does not have any effect on the incidence of pulmonary embolism.[35]

Following the completion of warfarin in those with prior VTE, the use of long-term aspirin has been show to be beneficial.[36]

American evidence-based clinical guidelines were published in 2016 for the treatment of VTE.[42] In the UK, guidelines by the National Institute for Health and Care Excellence (NICE) were published in 2012, updated in 2020.[43] These guidelines do not cover rare forms of thrombosis, for which an individualized approach is often needed.[5] Central and branch retinal vein occlusion does not benefit from anticoagulation in the way that other venous thromboses do.[5]

If diagnostic testing cannot be performed swiftly, many are commenced on empirical treatment.[43] Traditionally this was heparin, but several of the DOACs are licensed for treatment without initial heparin use.[42]

If heparin is used for initial treatment of VTE, fixed doses with low-molecular-weight heparin (LMWH) may be more effective than adjusted doses of unfractionated heparin (UFH) in reducing blood clots.[44] No differences in mortality, prevention of major bleeding, or preventing VTEs from recurring were observed between LMWH and UFH.[45] No differences have been detected in the route of administration of UFH (subcutaneous or intravenous).[44] LMWH is usually administered by a subcutaneous injection, and a person's blood clotting factors do not have to be monitored as closely as with UFH.[44]

Once the diagnosis is confirmed, a decision needs to be made about the nature of the ongoing treatment and its duration. USA recommendations for those without cancer include anticoagulation (medication that prevents further blood clots from forming) with the DOACs dabigatran, rivaroxaban, apixaban, or edoxaban rather than warfarin or low molecular weight heparin (LMWH).[42]

For those with cancer, LMWH is recommended,[42] although DOACs appear safe in the majority of situations.[43] For long-term treatment in people with cancer, LMWH is probably more effective at reducing VTEs when compared to vitamin K antagonists.[37] People with cancer have a higher risk of experiencing reoccurring VTE episodes ("recurrent VTE"), even while taking preventative anticoagulation medication. These people should be given therapeutic doses of LMWH medication, either by switching from another anticoagulant or by taking a higher dose of LMWH.[46]

In pregnancy, warfarin and DOACs are not considered suitable and LMWH is recommended.[42]

Thrombolysis is the administration of medication (a recombinant enzyme) that activates plasmin, the body's main enzyme that breaks down blood clots. This carries a risk of bleeding and is therefore reserved for those who have a form of thrombosis that may cause major complications. In pulmonary embolism, this applies in situations where heart function is compromised due to lack of blood flow through the lungs ("massive" or "high risk" pulmonary embolism), leading to low blood pressure.[42] Deep vein thrombosis may require thrombolysis if there is a significant risk of post-thrombotic syndrome.[42] Thrombolysis may be administered by intravenous catheter directly into the clot ("catheter-directed thrombolysis"); this requires a lower dose of the medication and may carry a lower bleeding risk but evidence for its benefit is limited.[42]

Inferior vena cava filters (IVCFs) are not recommended in those who are on anticoagulants.[42] IVCFs may be used in clinical situations where a person has a high risk of experiencing a pulmonary embolism, but cannot be on anticoagulants due to a high risk of bleeding, or they have active bleeding.[46][47] Retrievable IVCFs are recommended if IVCFs must be used, and a plan should be created to remove the filter when it is no longer needed.[46]

After an episode of unprovoked VTE, the risk of further episodes after completing treatment remains elevated, although this risk diminishes over time. Over ten years, 41% of men and 29% of women can expect to experience a further episode. For each episode, the risk of death is 4%.[49]