Esophagitis, also spelled oesophagitis, is a disease characterized by inflammation of the esophagus. The esophagus is a tube composed of a mucosal lining, and longitudinal and circular smooth muscle fibers. It connects the pharynx to the stomach; swallowed food and liquids normally pass through it.[1]

Esophagitis can be asymptomatic; or can cause epigastric and/or substernal burning pain, especially when lying down or straining; and can make swallowing difficult (dysphagia). The most common cause of esophagitis is the reverse flow of acid from the stomach into the lower esophagus: gastroesophageal reflux disease (GERD).[2]

The symptoms of esophagitis include:[2]

If the disease remains untreated, it can cause scarring and discomfort in the esophagus. If the irritation is not allowed to heal, esophagitis can result in esophageal ulcers. Esophagitis can develop into Barrett's esophagus and can increase the risk of esophageal cancer.[3]

Esophagitis cannot be spread. However, infections can be spread by those who have infectious esophagitis. Esophagitis can develop due to many causes. GERD is the most common cause of esophagitis because of the backflow of acid from the stomach, which can irritate the lining of the esophagus.

If the sphincter is not sufficiently tight, it may allow acid to enter the esophagus, causing inflammation of one or more layers. Esophagitis may also occur if an infection is present, which may be due to bacteria, viruses, or fungi; or by diseases that affect the immune system.[4]

Irritation can be caused by GERD, vomiting, surgery, medications, hernias, and radiation injury.[4] Inflammation can cause the esophagus to narrow, which makes swallowing food difficult and may result in food bolus impaction. 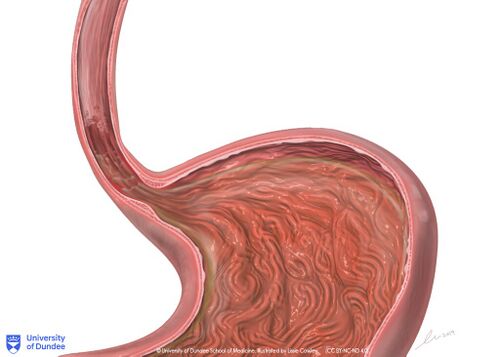 An upper endoscopy is a procedure to look at the esophagus by using an endoscope. While looking at the esophagus, the doctor is able to take a small biopsy. The biopsy can be used to confirm inflammation of the esophagus.

An upper GI series uses a barium contrast, fluoroscopy, and an X-ray. During a barium X-ray, a solution with barium or pill is taken before getting an X-ray. The barium makes the organs more visible and can detect if there is any narrowing, inflammation, or other abnormalities that can be causing the disease. The upper GI series can be used to find the cause of GI symptoms. An esophagram is if only the throat and esophagus are looked at.[5]

Although it usually assumed that inflammation from acid reflux is caused by the irritant action on the mucosa by hydrochloric acid, one study suggests that the pathogenesis of reflux esophagitis may be cytokine-mediated.[6]

Esophagitis happens due to a viral, fungal, parasitic or bacterial infection. More likely to happen to people who have an immunodeficiency. Types include:

Damage to the esophagus due to medications. If the esophagus is not coated or if the medicine is not taken with enough liquid, it can damage the tissues.

Eosinophilic esophagitis is caused by a high concentration of eosinophils in the esophagus. The presence of eosinophils in the esophagus may be due to an allergen and is often correlated with GERD. The direction of cause and effect between inflammation and acid reflux is poorly established, with recent studies (in 2016) hinting that reflux does not cause inflammation.[6] This esophagitis can be triggered by allergies to food or to inhaled allergens. This type is still poorly understood.

Lymphocytic esophagitis is a rare and poorly understood entity associated with an increased amount of lymphocytes in the lining of the esophagus.[1] It was first described in 2006. Disease associations may include Crohn's disease, gastroesophageal reflux disease and coeliac disease. It causes similar changes on endoscopy as eosinophilic esophagitis including esophageal rings, narrow-lumen esophagus, and linear furrows.

Caustic esophagitis is the damage of tissue via chemical origin. This occasionally occurs through occupational exposure (via breathing of fumes that mix into the saliva which is then swallowed) or through pica. It occurred in some teenagers during the fad of intentionally eating Tide pods.

The severity of reflux esophagitis is commonly classified into four grades according to the Los Angeles Classification:[7][8]

Since there can be many causes underlying esophagitis, it is important to try to find the cause to help to prevent esophagitis. To prevent reflux esophagitis, avoid acidic foods, caffeine, eating before going to bed, alcohol, fatty meals, and smoking. To prevent drug-induced esophagitis, drink plenty of liquids when taking medicines, take an alternative drug, and do not take medicines while lying down, before sleeping, or too many at one time. Esophagitis is more prevalent in adults and does not discriminate.

Losing weight, stop smoking and alcohol, lowering stress, avoid sleeping/lying down after eating, raising the head of the bed, taking medicines correctly, avoiding certain medications, and avoiding foods that cause the reflux that might be causing the esophagitis.[9]

To treat reflux esophagitis, over the counter antacids, medications that reduce acid production (H-2 receptor blockers), and proton pump inhibitors are recommended to help block acid production and to let the esophagus heal. Some prescription medications to treat reflux esophagitis include higher dose H-2 receptor blockers, proton pump inhibitors, and prokinetics, which help with the emptying of the stomach. However prokinetics are no longer licensed for GERD because their evidence of efficacy is poor, and following a safety review, licensed use of domperidone and metoclopramide is now restricted to short-term use in nausea and vomiting only.[10]

For infectious esophagitis, medicine is prescribed based on what type of infection is causing the esophagitis. These medicines are prescribed to treat bacterial, fungal, viral, and/or parasitic infections.

As of 2020 evidence for magnetic sphincter augmentation is poor.[11]

The prognosis for a person with esophagitis depends on the underlying causes and conditions. If a patient has a more serious underlying cause such as a digestive system or immune system issue, it may be more difficult to treat. Normally, the prognosis would be good with no serious illnesses. If there are more causes than one, the prognosis could move to fair.

The term is from Greek οἰσοφάγος "gullet" and -itis "inflammation".