Wolff–Parkinson–White syndrome (WPWS) is a disorder due to a specific type of problem with the electrical system of the heart which has resulted in symptoms.[2][3] About 40% of people with the electrical problem never develop symptoms.[5] Symptoms can include an abnormally fast heartbeat, palpitations, shortness of breath, lightheadedness, or syncope.[1] Rarely, cardiac arrest may occur.[1] The most common type of irregular heartbeat that occurs is known as paroxysmal supraventricular tachycardia.[1]

The cause of WPW is typically unknown.[2] A small number of cases are due to a mutation of the PRKAG2 gene which may be inherited from a person's parents in an autosomal dominant fashion.[2] The underlying mechanism involves an accessory electrical conduction pathway between the atria and the ventricles.[1] It is associated with other conditions such as Ebstein anomaly and hypokalemic periodic paralysis.[1] Diagnosis is typically when an electrocardiogram (ECG) show a short PR interval and a delta wave.[3] It is a type of pre-excitation syndrome.[3]

WPW syndrome is treated with either medications or radiofrequency catheter ablation.[4] It affects between 0.1 and 0.3% in the population.[1] The risk of death in those without symptoms is about 0.5% per year in children and 0.1% per year in adults.[5] In those without symptoms ongoing observation may be reasonable.[5] In those with WPW complicated by atrial fibrillation, cardioversion or the medication procainamide may be used.[6] The condition is named after Louis Wolff, John Parkinson, and Paul Dudley White who described the ECG findings in 1930.[3]

People with WPW are usually asymptomatic when not having a fast heart rate. However, individuals may experience palpitations, dizziness, shortness of breath, or infrequently syncope (fainting or near fainting) during episodes of supraventricular tachycardia. WPW is also associated with a very small risk of sudden death due to more dangerous heart rhythm disturbances.[7]

Graphic representation of the electrical conduction system of the human heart

Electrical activity in the normal human heart begins when a cardiac action potential arises in the sinoatrial (SA) node, which is located in the right atrium. From there, the electrical stimulus is transmitted via internodal pathways to the atrioventricular (AV) node. After a brief delay at the AV node, the stimulus travels through the bundle of His to the left and right bundle branches and then to the Purkinje fibers and the endocardium at the apex of the heart, then finally to the ventricular myocardium.

Individuals with WPW have an accessory pathway that communicates between the atria and the ventricles, in addition to the AV node. This accessory pathway is known as the bundle of Kent. This accessory pathway does not share the rate-slowing properties of the AV node, and may conduct electrical activity at a significantly higher rate than the AV node. For instance, in the example above, if an individual had an atrial rate of 300 beats per minute, the accessory bundle may conduct all the electrical impulses from the atria to the ventricles, causing the ventricles to contract at 300 beats per minute. Extremely rapid heart rates such as this may result in hemodynamic instability or cardiogenic shock. In some cases, the combination of an accessory pathway and abnormal heart rhythms can trigger ventricular fibrillation, a leading cause of sudden cardiac death.

WPW may be associated with PRKAG2, a protein kinase enzyme encoded by the PRKAG2 gene.[8]

The bundle of Kent is an abnormal extra or accessory conduction pathway between the atria and ventricles that is present in a small percentage (between 0.1 and 0.3%) of the general population.[9][10][11] This pathway may communicate between the left atrium and the left ventricle, in which case it is termed a "type A pre-excitation", or between the right atrium and the right ventricle, in which case it is termed a "type B pre-excitation".[12] Problems arise when this pathway creates an electrical circuit that bypasses the AV node. The AV node is capable of slowing the rate of conduction of electrical impulses to the ventricles, whereas the bundle of Kent lacks this capability. When an aberrant electrical connection is made via the bundle of Kent, tachydysrhythmias may therefore result. 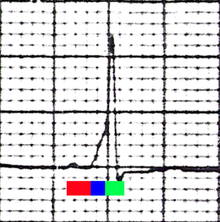 One beat from a rhythm strip in V2 demonstrating characteristic findings in Wolff–Parkinson–White syndrome: Note the characteristic delta wave (above the blue bar), the short PR interval (red bar) of 80 ms, and the long QRS complex (blue bar plus green bar) at 120 ms.

WPW is commonly diagnosed on the basis of the electrocardiogram in an asymptomatic individual. In this case, it is manifested as a delta wave, which is a slurred upstroke in the QRS complex that is associated with a short PR interval. The short PR interval and slurring of the QRS complex are reflective of the impulse making it to the ventricles early (via the accessory pathway) without the usual delay experienced in the AV node.

People with WPW may have more than one accessory pathway – in some cases, as many as eight abnormal pathways have been found. This has been seen in individuals with Ebstein's anomaly.

12 lead electrocardiogram of an individual with Wolff–Parkinson–White syndrome

WPW carries a small risk of sudden death, presumably due to rapidly conducted atrial fibrillation causing ventricular fibrillation. While the overall risk is approximately 2.4 per 1000 person years, the risk in an individual is dependent on the properties of the accessory pathway causing pre-excitation.[7]

High-risk features that may be present during PES include an effective refractory period of the accessory pathway less than 250 ms, multiple pathways, septal location of pathway, and inducibility of supraventricular tachycardia (AVRT, atrial fibrillation). Individuals with any of these high-risk features are generally considered at increased risk for SCD or symptomatic tachycardia, and should be treated accordingly (i.e.: catheter ablation).[14]

It is unclear whether invasive risk stratification (with PES) is necessary in the asymptomatic individual.[15] While some groups advocate PES for risk stratification in all individuals under 35 years old, others only offer it to individuals who have history suggestive of a tachydysrhythmia, since the incidence of sudden cardiac death is so low (less than 0.6% in some reports).[11][16][17]

Other methods of risk stratification include observing the ventricular rate during spontaneous atrial fibrillation on a 12-lead ECG. RR intervals of less than 250 ms suggest a higher risk pathway. During exercise testing, abrupt loss of pre-excitation as heart rate increases also suggest a lower risk pathway.[7] However, this approach is hampered by the normal improvement in AV node conduction during exercise which can also mask pre-excitation despite ongoing conduction down the accessory pathway.[18]

People with WPW who are experiencing tachydysrhythmias may require synchronized electrical cardioversion if they are demonstrating severe signs or symptoms (for example, low blood pressure or lethargy with altered mental status). If they are relatively stable, medication may be used.

AV node blockers should be avoided in atrial fibrillation and atrial flutter with WPW or history of it; this includes adenosine, diltiazem, verapamil, other calcium channel blockers, and beta blockers.[22] They can exacerbate the syndrome by blocking the heart's normal electrical pathway (therefore favoring 1:1 atrial to ventricle conduction through the pre-excitation pathway, potentially leading to unstable ventricular arrhythmias).

The bundle of Kent is eponymously named for British physiologist Albert Frank Stanley Kent (1863–1958), who described lateral branches in the atrioventricular groove of the monkey heart (erroneously believing these constituted the normal atrioventricular conduction system).[25][26]