Second-degree atrioventricular block (second-degree AV block) is were the electrical signals from the upper to lower chambers of the heart are occasionally blocked.[1] It is divided into Mobitz type I and Mobitz type II.[2] Type I disease usually has no symptoms while type II disease often presents with tiredness, shortness of breath, chest pain, or syncope.[1] Type II disease may progress to third-degree AV block or sudden cardiac death.[1]

Type I may be normal in a younger person or athlete.[2] However, it may also occur due to coronary artery disease, certain medications, high blood potassium, cardiomyopathy, rheumatic fever, or after heart surgery.[1] Medications that may be involved include beta blockers, calcium channel blockers, antiarrhythmics, and digoxin.[1] Type II disease is generally always due to an underlying problem.[2]

Diagnosis is by electrocardiogram (ECG).[1] In type I disease the PR interval becomes longer with each beat, until an atrial impulse is completely blocked resulting in a dropped beat.[1] In type II the PR interval dose not change and atrial impulses are intermittently blocked.[1] If every second beat is dropped it can be difficult to differentiate between type I and II.[1] It is a type of atrioventricular block.[1]

Specific teatment for type I disease is often not necessary.[1] Medication that may be worsening the condition may be reduced or stopped and the person follow up.[1] If a slow heartrate or low blood pressure occurs this can often be treated with atropine.[1] Rarely cardiac pacing maybe required.[1] Type II disease is nearly always treated with cardiac pacing.[1] Type I disease was first described by Karel Frederik Wenckebach in 1899, while type II disease was first described by Woldemar Mobitz in 1924.[3][4]

Most people with type I do not show symptoms. However, those that do usually display one or more of the following:

There are two non-distinct types of second-degree AV block, called type 1 and type 2. In both types, a P wave is blocked from initiating a QRS complex; but, in type 1, there are increasing delays in each cycle before the omission, whereas, in type 2, there is no such pattern.[5] 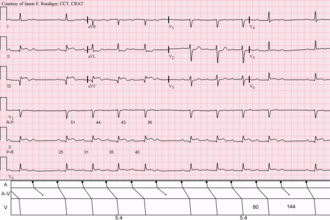 Type 1 second-degree AV block, also known as Mobitz I or Wenckebach periodicity, is almost always a disease of the AV node. Wenckebach published a paper in 1906 on progressively lengthening PR intervals [7] that was later classified as Type I in Mobitz's 1924 paper.[8] Thus, both "Mobitz type I" and "Wenckebach block" refer to the same pattern and pathophysiology.

In Wenckebach's 1906 paper, his original observations were from increasing delay in contraction of the atria & ventricles that shortened after a brief pause and this was later observed on ECG after Einthoven's invention in 1901 that became the electrocardiogram (ECG). Today, Mobitz I heart block is characterized by progressive prolongation of the PR interval on consecutive beats followed by a blocked P wave (i.e., a dropped QRS complex). After the dropped QRS complex, the PR interval resets and the cycle repeats. This grouped beating was described as "Luciani periods" after Luigi Luciani's work in 1873.[9] The result is a lengthening of the R-R intervals as each subsequent P-wave reaches an increasingly refractory AV node until the impulse fails to conduct, which ultimately results in a blocked QRS complex.

One of the baseline assumptions when determining if an individual has Mobitz I heart block is that the atrial rhythm has to be regular. If the atrial rhythm is not regular, there could be alternative explanations as to why certain P waves do not conduct to the ventricles.

This is almost always a benign condition for which no specific treatment is needed for the rhythm itself. It can be seen in myocardial ischemia, propranolol use, digitalis use, rheumatic fever, and chronically in ischemic heart disease and other structural diseases (amyloidosis, mitral valve prolapse, aortic valve disease, and atrial septal defect). In symptomatic cases, intravenous atropine or isoproterenol may transiently improve conduction.[10]

The medical significance of this type of AV block is that it may progress rapidly to complete heart block, in which no escape rhythm may emerge. In this case, the person may experience a Stokes-Adams attack, cardiac arrest, or sudden cardiac death. The definitive treatment for this form of AV Block is an implanted pacemaker.

The impairment is usually below the AV node.[12] Although the terms "infranodal block" or "infrahisian block" are often applied to this disorder, they refer to the anatomic location of the block, whereas Mobitz II refers to an electrocardiographic pattern.

Because type I Mobitz block occurs in regular cycles, there is always a fixed ratio between the number of P waves and the number of QRS complexes per cycle. This ratio is often specified when describing the block. For example, a Mobitz type I block which has 4 P waves and 3 QRS complexes per cycle may be referred to as 4:3 Mobitz Type I block.[11]:179

Type II Mobitz block also usually occurs with a fixed P:QRS ratio, with a set number of P waves for every successfully elicited QRS.[11]:179 This ratio is also frequently specified in referring to 3:1, 4:1, 5:1, or higher Mobitz type II block. Higher numbers of P waves for every QRS indicate more severe block.[11]:181 Of course, because type II Mobitz block is unstable by nature, it is common for the P:QRS ratio in Mobitz type II block to change over time.[citation needed]

In the case of 2:1 block (2 P waves for every QRS complex) it is impossible to differentiate type I from type II Mobitz block based solely on the P:QRS ratio or on a pattern of lengthening PR intervals.[11]:182 In this case, a lengthened PR interval with a normal QRS width is most likely indicative of a type I-like pathology, and a normal PR interval with a widened QRS is most likely indicative of a type II-like pathology.[11]:182