They start from either the atria or atrioventricular node.[2] They are generally due to one of two mechanisms: re-entry or increased automaticity.[3] The other type of fast heart rhythm is ventricular arrhythmias—rapid rhythms that start within the ventricle.[2] Diagnosis is typically by electrocardiogram (ECG), holter monitor, or event monitor.[4] Blood tests may be done to rule out specific underlying causes such as hyperthyroidism or electrolyte abnormalities.[4]

Specific treatments depend on the type of SVT.[5] They can include medications, medical procedures, or surgery.[5] Vagal maneuvers or a procedure known as catheter ablation may be effective in certain types.[5] For atrial fibrillation calcium channel blockers or beta blockers may be used.[5] Long term some people benefit from blood thinners such as aspirin or warfarin.[5] Atrial fibrillation affects about 25 per 1000 people,[7] paroxysmal supraventricular tachycardia 2.3 per 1000,[6] Wolff-Parkinson-White syndrome 2 per 1000,[8] and atrial flutter 0.8 per 1000.[9]

Signs and symptoms can arise suddenly and may resolve without treatment. Stress, exercise, and emotion can all result in a normal or physiological increase in heart rate, but can also, more rarely, precipitate SVT. Episodes can last from a few minutes to one or two days, sometimes persisting until treated. The rapid heart rate reduces the opportunity for the "pump" to fill between beats decreasing cardiac output and as a consequence blood pressure. The following symptoms are typical with a rate of 150–270 or more beats per minute:

For infants and toddlers, symptoms of heart arrhythmias such as SVT are more difficult to assess because of limited ability to communicate. Caregivers should watch for lack of interest in feeding, shallow breathing, and lethargy. These symptoms may be subtle and may be accompanied by vomiting and/or a decrease in responsiveness.[10] 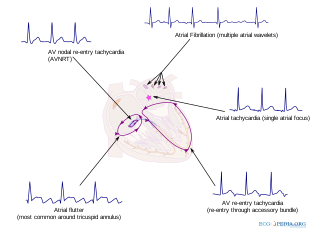 The main pumping chamber, the ventricle, is protected (to a certain extent) against excessively high rates arising from the supraventricular areas by a "gating mechanism" at the atrioventricular node, which allows only a proportion of the fast impulses to pass through to the ventricles. In Wolff-Parkinson-White syndrome, a "bypass tract" avoids this node and its protection and the fast rate may be directly transmitted to the ventricles. This situation has characteristic findings on ECG.

Holter monitor-Imaging with start (red arrow) and end (blue arrow) of a SV-tachycardia with a pulse frequency of about 128/min. 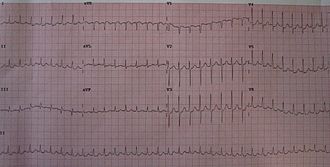 A 12-lead ECG showing paroxysmal supraventricular tachycardia at about 180 beats per minute.

The following types of supraventricular tachycardias are more precisely classified by their specific site of origin. While each belongs to the broad classification of SVT, the specific term/diagnosis is preferred when possible:

(Without rapid ventricular response, fibrillation and flutter are usually not classified as SVT)

Once an acute arrhythmia has been terminated, ongoing treatment may be indicated to prevent recurrence. However, those that have an isolated episode, or infrequent and minimally symptomatic episodes, usually do not warrant any treatment other than observation.

In general, patients with more frequent or disabling symptoms warrant some form of prevention. A variety of drugs including simple AV nodal blocking agents such as beta-blockers and verapamil, as well as anti-arrhythmics may be used, usually with good effect, although the risks of these therapies need to be weighed against potential benefits.

Radiofrequency ablation has revolutionized the treatment of tachycardia caused by a re-entrant pathway. This is a low-risk procedure that uses a catheter inside the heart to deliver radio frequency energy to locate and destroy the abnormal electrical pathways. Ablation has been shown to be highly effective: around 90% in the case of AVNRT. Similar high rates of success are achieved with AVRT and typical atrial flutter.

Cryoablation is a newer treatment for SVT involving the AV node directly. SVT involving the AV node is often a contraindication for using radiofrequency ablation due to the small (1%) incidence of injuring the AV node, requiring a permanent pacemaker. Cryoablation uses a catheter supercooled by nitrous oxide gas freezing the tissue to −10 °C (+14.0 °F). This provides the same result as radiofrequency ablation but does not carry the same risk. If it is found that the wrong tissue is being frozen, the freezing process can quickly be stopped and the tissue return to normal temperature and function in a short time. If after freezing the tissue to −10 °C the desired result is obtained, the tissue can be further cooled to a temperature of −73 °C (-99.4 °F) and it will be permanently ablated.

This therapy has further improved the treatment options for people with AVNRT (and other SVTs with pathways close to the AV node), widening the application of curative ablation to young patients with relatively mild but still troublesome symptoms who would not have accepted the risk of requiring a pacemaker.

Most SVTs are unpleasant rather than life-threatening, although very fast heart rates can be problematic for those with underlying ischemic heart disease or the elderly. Episodes require treatment when they occur, but interval therapy may also be used to prevent or reduce recurrence. While some treatment modalities can be applied to all SVTs, there are specific therapies available to treat some sub-types. Effective treatment consequently requires knowledge of how and where the arrhythmia is initiated and its mode of spread.

SVTs can be classified by whether the AV node is involved in maintaining the rhythm. If so, slowing conduction through the AV node will terminate it. If not, AV nodal blocking maneuvers will not work, although transient AV block is still useful as it may unmask an underlying abnormal rhythm.

After being successfully diagnosed and treated, Bobby Julich went on to place third in the 1998 Tour de France and win a Bronze Medal in the 2004 Summer Olympics. Women's Olympic volleyball player Tayyiba Haneef-Park underwent an ablation for SVT just two months before competing in the 2008 Summer Olympics.[12] Tony Blair, former PM of the UK, was also operated on for atrial flutter. Anastacia was diagnosed with the disease.[13] Women's Olympic gold medalist swimmers, Rebecca Soni and Dana Vollmer have both had heart surgery to correct SVT. In addition, Neville Fields had corrective surgery for SVT in early 2006. Wrestling manager Paul Bearer's heart attack was attributed to SVT, resulting in his death.[14] Nathan Cohen, New Zealand's two-time world champion and Olympic champion rower, was diagnosed with SVT in 2013 when he was 27 years old.[15][16][17]