Myocarditis, also known as inflammatory cardiomyopathy, is inflammation of the heart muscle.[1] Symptoms can include shortness of breath, chest pain, decreased ability to exercise, and an irregular heartbeat.[1] The duration of problems can vary from hours to months.[1] Complications may include heart failure due to dilated cardiomyopathy or cardiac arrest.[1]

Myocarditis is most often due to a viral infection.[1] Other causes include bacterial infections, certain medications, toxins, and autoimmune disorders.[1][2] A diagnosis may be supported by an electrocardiogram (ECG), increased troponin, heart MRI, and occasionally a heart biopsy.[1][2] An ultrasound of the heart is important to rule out other potential causes such as heart valve problems.[2]

Treatment depends on both the severity and the cause.[1][2] Medications such as ACE inhibitors, beta blockers, and diuretics are often used.[1][2] A period of no exercise is typically recommended during recovery.[1][2] Corticosteroids or intravenous immunoglobulin (IVIG) may be useful in certain cases.[1][2] In severe cases an implantable cardiac defibrillator or heart transplant may be recommended.[1][2]

Since myocarditis is often due to a viral illness, many patients give a history of symptoms consistent with a recent viral infection, including fever, rash, diarrhea, joint pains, and easily becoming tired.

A large number of causes of myocarditis have been identified, but often a cause cannot be found. In Europe and North America, viruses are common culprits. Worldwide, however, the most common cause is Chagas' disease, an illness endemic to Central and South America that is due to infection by the protozoan Trypanosoma cruzi.[11] In viral myocarditis, the Coxsackie B family of the single-stranded RNA viruses, in particular the plus-strand RNA virus Coxsackievirus B3 and Coxsackievirus B5 are the most frequent cause.[13] Many of the causes listed below, particularly those involving protozoa, fungi, parasites, allergy, autoimmune disorders, and drugs are also causes of eosinophilic myocarditis.

Bacterial myocarditis is rare in patients without immunodeficiency.

Most forms of myocarditis involve the infiltration of heart tissues by one or two types of pro-inflammatory blood cells, lymphocytes and macrophages plus two respective descendants of these cells, NK cells and macrophages. Eosinophilic myocarditis is a subtype of myocarditis in which cardiac tissue is infiltrated by another type of pro-inflammatory blood cell, the eosinophil. Eosinophilic myocarditis is further distinguished from non-eosinophilic myocarditis by having a different set of causes and recommended treatments.[18][19] Coxsackie B, specifically B3 and B5, has been found to interact with coxsackievirus-adenovirus receptor (CAR) and decay-accelerating factor (DAF). However, other proteins have also been identified that allow Coxsackieviruses to bind to cardiac cells. The natural function of CAR and mechanism that the Coxsackievirus uses to infect the cardiac muscle is still unknown.[13] The mechanism by which coxsackie B viruses (CBVs) trigger inflammation is believed to be through the recognition of CBV virions by Toll-like receptors.[13] 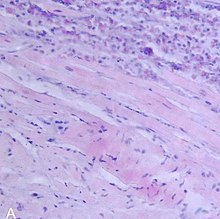 The ECG findings most commonly seen in myocarditis are diffuse T wave inversions; saddle-shaped ST-segment elevations may be present (these are also seen in pericarditis).[11]

The gold standard is the biopsy of the myocardium, in general done in the setting of angiography. A small tissue sample of the endocardium and myocardium is taken and investigated. The cause for the myocarditis can be only diagnosed by a biopsy. Endomyocardial biopsy samples are assessed for histopathology (how the tissue looks like under the microscope: myocardial interstitium may show abundant edema and inflammatory infiltrate, rich in lymphocytes and macrophages. Focal destruction of myocytes explains the myocardial pump failure.[11] In addition samples may be assessed with immunohistochemistry to determine which types of immune cells are involved in the reaction and how they are distributed. Furthermore, PCR and/or RT-PCR may be performed to identify particular viruses. Finally, further diagnostic methods like microRNA assays and gene-expression profile may be performed.[citation needed]

Cardiac magnetic resonance imaging (cMRI or CMR) has been shown to be very useful in diagnosing myocarditis by visualizing markers for inflammation of the myocardium.[22] Recently, consensus criteria for the diagnosis of myocarditis by CMR have been published.[23]

As with most viral infections, symptomatic treatment is the only form of therapy for most forms of myocarditis.[25] In the acute phase, supportive therapy, including bed rest, is indicated.

In people with symptoms, digoxin and diuretics may help. For people with moderate to severe dysfunction, cardiac function can be supported by use of inotropes such as milrinone in the acute phase, followed by oral therapy with ACE inhibitors when tolerated.

Systemic corticosteroids may have beneficial effects in people with proven myocarditis.[26] However, data on the usefulness of corticosteroids should be interpreted with caution, since 58% of adults recover spontaneously, while most studies on children lack control groups.[25]

A 2015 Cochrane review found no evidence of benefit of using intravenous immunoglobulin (IVIG) in adults and tentative benefit in certain children.[27] It is not recommended routinely until there is better evidence.[27]

Extracorporeal membrane oxygenation may be used in those who are about to go into cardiac arrest.[28]

Studies have shown no benefit for the use of herbal medicine on all cause mortality in viral myocarditis.[29]

Among patients with HIV, myocarditis is the most common cardiac pathological finding at autopsy, with a prevalence of 50% or more.[30]

Cases of myocarditis have been documented as early as the 1600s,[31] but the term "myocarditis", implying an inflammatory process of the myocardium, was introduced by German physician Joseph Friedrich Sobernheim in 1837.[32] However, the term has been confused with other cardiovascular conditions, such as hypertension and ischemic heart disease.[33] Following admonition regarding the indiscriminate use of myocarditis as a diagnosis from authorities such as British cardiologist Sir Thomas Lewis and American cardiologist and a co-founder of the American Heart Association Paul White, myocarditis was under-diagnosed.[33]

Although myocarditis is clinically and pathologically clearly defined as "inflammation of the myocardium", its definition, classification, diagnosis, and treatment are subject to continued controversy, but endomyocardial biopsy has helped define the natural history of myocarditis and clarify clinicopathological correlations.[34]