The mitral valve (/ˈmaɪtrəl/), also known as the bicuspid valve or left atrioventricular valve, is a valve with two flaps in the heart that lies between the left atrium and the left ventricle. The mitral valve and the tricuspid valve are known collectively as the atrioventricular valves because they lie between the atria and the ventricles of the heart.[1]

In abnormal conditions, blood may flow backward through the valve (mitral regurgitation) or the mitral valve may be narrowed (mitral stenosis). Rheumatic heart disease often affects the mitral valve; the valve may also prolapse with age and be affected by infective endocarditis. The mitral valve is named after the mitre of a bishop, which resembles its flaps.[3][4] 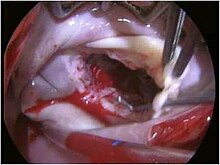 Operative view of the mitral valve with a chordal rupture "fail" of the anterior leaflet
See also: Heart valve

The mitral valve is typically 4 to 6 square centimetres (0.62 to 0.93 sq in) in area and sits in the left heart between the left atrium and the left ventricle. It has two leaflets (or "cusps"), an anteromedial leaflet and a posterolateral leaflet. The opening of the mitral valve is surrounded by a fibrous ring known as the mitral annulus. The anterior cusp covers approximately two-thirds of the valve (imagine a crescent moon within the circle, where the crescent represents the posterior cusp). Although the anterior leaflet takes up a larger part of the ring and rises higher, the posterior leaflet has a larger surface area.

The left side of the heart. The mitral valve, as well as the chordae tendinae are visible as white strings. These connect to the papillary muscles visible attaching to the muscular ventricle.

When the left ventricle contracts, the pressure in the ventricle forces the valve to close, while the tendons keep the leaflets coapting together and prevent the valve from opening in the wrong direction (thus preventing blood flowing back to the left atrium). Each chord has a different thickness. The thinnest ones are attached to the free leaflet margin, whereas the thickest ones (strut chords) are attached further from the free margin. This disposition has important effects on systolic stress distribution physiology.[5] 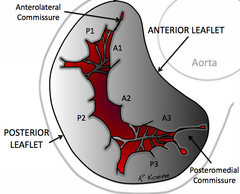 The mitral annulus is a fibrous ring that is attached to the mitral valve leaflets. Unlike prosthetic valves, it is not continuous. The mitral annulus is saddle shaped and changes in shape throughout the cardiac cycle.[6] The annulus contracts and reduces its surface area during systole to help provide complete closure of the leaflets. Expansion of the annulus can result in leaflets that do not join soundly together, leading to functional mitral regurgitation.[7]

The normal diameter of the mitral annulus is 2.7 to 3.5 centimetres (1.1 to 1.4 in), and the circumference is 8 to 9 centimetres (3.1 to 3.5 in). Microscopically, there is no evidence of an annular structure anteriorly, where the mitral valve leaflet is contiguous with the posterior aortic root.[8]

After the E wave, there is a period of slow filling of the ventricle.

The mitral annulus changes in shape and size during the cardiac cycle. It is smaller at the end of atrial systole due to the contraction of the left atrium around it, like a sphincter. This reduction in annulus size at the end of atrial systole may be important for the proper coapting of the leaflets of the mitral valve when the left ventricle contracts and pumps blood.[9] Leaking valves can be corrected by mitral valve annuloplasty, a common surgical procedure that aims at restoring proper leaflet adjustment.

There are some valvular heart diseases that affect the mitral valve. Mitral stenosis is a narrowing of the valve. This can be heard as an opening snap in a heart sound which is not normally present.

Classic mitral valve prolapse is caused by an excess of connective tissue that thickens the spongiosa layer of the cusp and separates collagen bundles in the fibrosa. This weakens the cusps and adjacent tissue, resulting in an increased cuspal area and lengthening of the chordae tendineae. Elongation of the chordae tendineae often causes rupture, commonly to the chordae attached to the posterior cusp. Advanced lesions—also commonly involving the posterior leaflet—lead to leaflet folding, inversion, and displacement toward the left atrium.[10]

A valve prolapse can result in mitral insufficiency, which is the regurgitation or backflow of blood due to the incomplete closure of the valve.

Surgery can be performed to replace or repair a damaged valve. A less invasive method is that of mitral valvuloplasty which uses a balloon catheter to open up a stenotic valve.

Rarely there can be a severe form known as caseous calcification of the mitral valve that can be mistaken for intracardiac mass or thrombus.[11]

The mitral valve is often also investigated using an ultrasound scan, which can reveal the size and flow of blood through the valve.