Ischemia is a restriction of the blood supply to tissue resulting in a shortage of oxygen.[3] Types include ischemic heart disease, stroke, peripheral vascular disease, and mesenteric ischemia.[4] Symptoms depend on the area of the body affected.[4] Onset may be gradual or sudden.[3]

Efforts to prevent the condition include a healthy lifestyle.[4] The first documented use of the term is from 1855.[2] The term is from the Greek ischein meaning "to restrain" plus haima meaning "blood".[2]

Since oxygen is carried to tissues in the blood, insufficient blood supply causes tissue to become starved of oxygen. In the highly metabolically active tissues of the heart and brain, irreversible damage to tissues can occur in as little as 3–4 minutes at body temperature. The kidneys are also quickly damaged by loss of blood flow (renal ischemia). Tissues with slower metabolic rates may undergo irreversible damage after 20 minutes.

Without immediate intervention, ischemia may progress quickly to tissue necrosis and gangrene within a few hours. Paralysis is a very late sign of acute arterial ischemia and signals the death of nerves supplying the extremity. Foot drop may occur as a result of nerve damage. Because nerves are extremely sensitive to hypoxia, limb paralysis or ischemic neuropathy may persist after revascularization and may be permanent.[6]

Cardiac ischemia may be asymptomatic or may cause chest pain, known as angina pectoris. It occurs when the heart muscle, or myocardium, receives insufficient blood flow. This most frequently results from atherosclerosis, which is the long-term accumulation of cholesterol-rich plaques in the coronary arteries. Ischemic heart disease is the most common cause of death in most Western countries and a major cause of hospital admissions.[7] 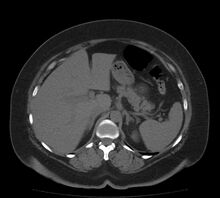 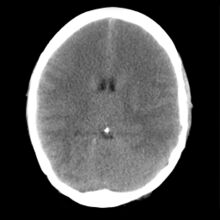 Brain ischemia is insufficient blood flow to the brain, and can be acute or chronic. Acute ischemic stroke is a neurologic emergency that may be reversible if treated rapidly. Chronic ischemia of the brain may result in a form of dementia called vascular dementia.[8] A brief episode of ischemia affecting the brain is called a transient ischemic attack (TIA), often called a mini-stroke. 10% of TIAs will develop into a stroke within 90 days, half of which will occur in the first two days following the TIA.[9]

Reduced blood flow to the skin layers may result in mottling or uneven, patchy discoloration of the skin

Ischemia is a vascular disease involving an interruption in the arterial blood supply to a tissue, organ, or extremity that, if untreated, can lead to tissue death. It can be caused by embolism, thrombosis of an atherosclerotic artery, or trauma. Venous problems like venous outflow obstruction and low-flow states can cause acute arterial ischemia. An aneurysm is one of the most frequent causes of acute arterial ischemia. Other causes are heart conditions including myocardial infarction, mitral valve disease, chronic atrial fibrillation, cardiomyopathies, and prosthesis, in all of which thrombi are prone to develop.[6]

The thrombi may dislodge and may travel anywhere in the circulatory system, where they may lead to pulmonary embolus, an acute arterial occlusion causing the oxygen and blood supply distal to the embolus to decrease suddenly. The degree and extent of symptoms depend on the size and location of the obstruction, the occurrence of clot fragmentation with embolism to smaller vessels, and the degree of peripheral arterial disease (PAD).[6]

Traumatic injury to an extremity may produce partial or total occlusion of a vessel from compression, shearing, or laceration. Acute arterial occlusion may develop as a result of arterial dissection in the carotid artery or aorta or as a result of iatrogenic arterial injury (e.g., after angiography).[6]

An inadequate flow of blood to a part of the body may be caused by any of the following: 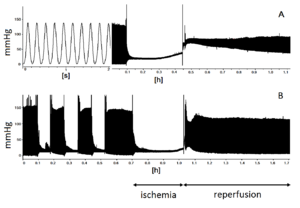 Ischemia results in tissue damage in a process known as ischemic cascade. The damage is the result of the build-up of metabolic waste products, inability to maintain cell membranes, mitochondrial damage, and eventual leakage of autolyzing proteolytic enzymes into the cell and surrounding tissues.

Restoration of blood supply to ischemic tissues can cause additional damage known as reperfusion injury that can be more damaging than the initial ischemia. Reintroduction of blood flow brings oxygen back to the tissues, causing a greater production of free radicals and reactive oxygen species that damage cells. It also brings more calcium ions to the tissues causing further calcium overloading and can result in potentially fatal cardiac arrhythmias and also accelerates cellular self-destruction. The restored blood flow also exaggerates the inflammation response of damaged tissues, causing white blood cells to destroy damaged cells that may otherwise still be viable.[11]

Early treatment is essential to keep the affected limb viable. The treatment options include injection of an anticoagulant, thrombolysis, embolectomy, surgical revascularisation, or partial amputation. Anticoagulant therapy is initiated to prevent further enlargement of the thrombus. Continuous IV unfractionated heparin has been the traditional agent of choice.[6]

If the condition of the ischemic limb is stabilized with anticoagulation, recently formed emboli may be treated with catheter-directed thrombolysis using intra-arterial infusion of a thrombolytic agent (e.g., recombinant tissue plasminogen activator (tPA), streptokinase, or urokinase). A percutaneous catheter inserted into the femoral artery and threaded to the site of the clot is used to infuse the drug. Unlike anticoagulants, thrombolytic agents work directly to resolve the clot over a period of 24 to 48 hours.[6]

Direct arteriotomy may be necessary to remove the clot. Surgical revascularization may be used in the setting of trauma (e.g., laceration of the artery). Amputation is reserved for cases where limb salvage is not possible. If the patient continues to have a risk of further embolization from some persistent source, such as chronic atrial fibrillation, treatment includes long-term oral anticoagulation to prevent further acute arterial ischemic episodes.[6]

Ischemic stroke is at times treated with various levels of statin therapy at hospital discharge, followed by home time, in an attempt to lower the risk of adverse events.[12][13]