Ticagrelor, sold under the brand name Brilinta among others, is a medication used in acute coronary syndrome to prevent stroke and heart attacks.[2][3] It is generally used with aspirin.[2] It is taken by mouth.[2]

Common side effects include bleeding and shortness of breath.[2] Other side effects may include cough, diarrhea, and low blood pressure.[3] It is a platelet aggregation inhibitor, specifically a adenosine diphosphate receptor inhibitor, which works by blocking ADP from attaching to platelets.[2][1]

Ticagrelor is used for the prevention of thrombotic events (for example stroke or heart attack) in different categories of patients. The drug is combined with acetylsalicylic acid unless the latter is contraindicated.[5] The PLATO trial suggested that the use of ticagrelor as a pre-treatment in people with non-ST elevation acute coronary syndrome (non-ST ACS) is superior than using clopidogrel in decreasing ischemic events and the total mortality independent of undergoing percutaneous coronary intervention.[6]

According to ESC 2017 guidelines, dual antiplatelet therapy (DAPT) with Ticagrelor in combination with Acetylsalicylic acid (Aspirin) is the preferred treatment in patients with acute coronary syndrome with or without ST segment elevation, irrespective of the initial treatment strategy – invasive or non-invasive (IB level of evidence)[8] however if there is a plan for percutaneous coronary intervention (PCI), administration of thrombolysis or the presence of some other patient factors (e.g. high bleeding risk) other antiplatelet agents are recommended.[9][10][11] The 2016 ACC/AHA Guideline Focused Update on Duration of Dual Antiplatelet Therapy provides similar recommendations, although with a lower level of evidence (IIaB).[12] Furthermore, the 2017 ESC Focused Update on Duration of Dual Antiplatelet Therapy allows physicians to administer ticagrelor to patients with stable coronary artery disease undergoing percutaneous coronary intervention after taking thrombotic and haemorrhagic risk into consideration.

Ticagrelor was not found to be superior to aspirin in reducing the rate of stroke, myocardial infarction or death in people with acute ischemic stroke or transient ischemic attack.[13] When associated with ipsilateral atherosclerotic stenosis, however, ticagrelor was found to be superior to aspirin.[14] Further studies are required to assess the role of ticagrelor in acute cerebrovascular disease. 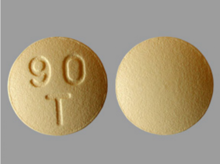 Contraindications to ticagrelor are active bleeding, increased risk of bradycardia, concomitant therapy of ticagrelor and strong cytochrome P-450 3A (CYP3A4) inhibitors and moderate or severe hepatic impairment due to the risk of increased exposure to ticagrelor.[9][15]

The common side effects are increased risk of bleeding (which may be severe)[16] and shortness of breath (dyspnoea).[17] Dyspnoea is usually mild to moderate in intensity, occurs in the first month of treatment, is often self-limiting, and the need for discontinuation is rare.[17][18] It does not impact on efficacy or safety outcomes in people with acute coronary syndrome (ACS)[17] and has no association with any adverse changes in heart and lung function.[18]

Ventricular pauses ≥3 seconds may occur in ACS patients the first week of treatment, but are likely to be mostly asymptomatic and transient, without causing increased clinical bradycardic adverse events.[19] Caution is recommended when using ticagrelor in patients with advanced sinoatrial node disease.[20] Allergic skin reactions such as rash and itching have been observed in less than 1% of patients.[5]

Inhibitors of the liver enzyme CYP3A4, such as ketoconazole and possibly grapefruit juice, increase blood plasma levels of ticagrelor and consequently can lead to bleeding and other adverse effects. Ticagrelor is a weak CYP3A4 inhibitor[21] and is known to increase the concentrations of CYP3A4 metabolised medications; however, this interaction is unlikely to be clinically significant for atorvastatin and simvastatin[22][21][23] at recommended doses. CYP3A4 inducers, for example rifampicin and possibly St. John's wort, can reduce the effectiveness of ticagrelor. There is no evidence for interactions via CYP2C9.

The drug also inhibits P-glycoprotein (P-gp), leading to increased plasma levels of digoxin, ciclosporin and other P-gp substrates. Levels of ticagrelor and AR-C124910XX (the active metabolite of ticagrelor formed by O-deethylation[24]) are not significantly influenced by P-gp inhibitors.[5]

Like the thienopyridines prasugrel, clopidogrel and ticlopidine, ticagrelor blocks adenosine diphosphate (ADP) receptors of subtype P2Y12. In contrast to the other antiplatelet drugs, ticagrelor has a binding site different from ADP, making it an allosteric antagonist, and the blockage is reversible.[31] Moreover, the drug does not need liver activation, which might work better for patients with genetic variants regarding the enzyme CYP2C19 (although it is not certain whether clopidogrel is significantly influenced by such variants).[32][33][34]

Ticagrelor is absorbed quickly from the gut, the bioavailability being 36%, and reaches its peak concentration after about 1.5 hours. The main metabolite, AR-C124910XX, is formed quickly via CYP3A4 by de-hydroxyethylation at position 5 of the cyclopentane ring.[24] It peaks after about 2.5 hours. Both ticagrelor and AR-C124910XX are bound to plasma proteins (>99.7%), and both are pharmacologically active. Blood plasma concentrations are linearly dependent on the dose up to 1260 mg (the sevenfold daily dose). The metabolite reaches 30–40% of ticagrelor's plasma concentrations. Drug and metabolite are mainly excreted via bile and feces.

Plasma concentrations of ticagrelor are slightly increased (12–23%) in elderly patients, women, patients of Asian ethnicity, and patients with mild hepatic impairment. They are decreased in patients that self-identified as 'black' and those with severe renal impairment. These differences are not considered clinically relevant. In Japanese people, concentrations are 40% higher than in Caucasians, or 20% after body weight correction. The drug has not been tested in patients with severe hepatic impairment.[5][35]

Consistently with its reversible mode of action, ticagrelor is known to act faster and shorter than clopidogrel.[36] This means it has to be taken twice instead of once a day which is a disadvantage in respect of compliance, but its effects are more quickly reversible which can be useful before surgery or if side effects occur.[5][37]

Ticagrelor is a nucleoside analogue: the cyclopentane ring is similar to the sugar ribose, and the nitrogen rich aromatic ring system resembles the nucleobase purine, giving the molecule an overall similarity to adenosine. The substance has low solubility and low permeability under the Biopharmaceutics Classification System.<[38]

A reversal agent, bentracimab, is under investigation for use in major or bleeding.[41]

The PLATO trial[42] found that ticagrelor had better mortality rates than clopidogrel (9.8% vs. 11.7%, p<0.001) in treating patients with acute coronary syndrome. Patients given ticagrelor were less likely to die from vascular causes, heart attack, or stroke but had greater chances of non-lethal bleeding (16.1% vs. 14.6%, p=0.0084) and higher rate of major bleeding not related to coronary-artery bypass grafting (4.5% vs. 3.8%, p=0.03). While the patient group on ticagrelor had more instances of fatal intracranial bleeding, there were significantly fewer cases of fatal non-intracranial bleeding, leading to an overall neutral effect on fatal or life-threatening bleeding vs. clopidogrel (p=0.70). Rates of major bleeding were not different. Discontinuation of the study drug due to adverse events occurred more frequently with ticagrelor than with clopidogrel (in 7.4% of patients vs. 6.0%, p<0.001).[43]

The PLATO trial showed a statistically insignificant trend toward worse outcomes with ticagrelor versus clopidogrel among US patients in the study – who comprised 1800 of the total 18,624 patients. The hazard ratio actually reversed for the composite end point cardiovascular (death, MI, or stroke): 12.6% for patients given ticagrelor and 10.1% for patients given clopidogrel (HR = 1.27). Some believe the results could be due to differences in aspirin maintenance doses, which are higher in the United States.[44] Others state that the central adjudicating committees found an extra 45 MIs in the clopidogrel (comparator) arm but none in the ticagrelor arm, which improved the MI outcomes with ticagrelor. Without this adjudication the trials' primary efficacy outcomes should not be significant.[45]

Also, there are some disagreement regarding efficacy and safety of ticagrelor in Asian patients. As mentioned before, ticagrelor provides significant thrombotic benefits, but increases bleeding risk at the same time.[42] It's especially of crucial importance for Asian individuals, as they are well-known to be prone to bleeding events.[46] Current evidence on the risk/benefit ratio of ticagrelor in this vulnerable population is somewhat controversial. Some meta-analyses of randomized controlled trials (RCTs) suggested that ticagrelor was associated with an increase in serious haemorrhagic events, which wasn't accompanied with ischaemic advantages in Asian patients.[47][48] However, these meta-analyses were mainly based on results of two RCTs with relatively small sample size and other pitfalls in design, which prevents researchers from generalization on the whole Asian population.[49][50] On the other hand, recent meta-analysis of observational studies implied that ticagrelor provides ischaemic benefits (mainly by reducing the risk of stroke) without a significant increase in major bleeding.[51] The "real-world" settings gave strong support for this study, nevertheless, further high-quality research are of vital importance to provide definite recommendations for clinical practice.

In 2019, the results of the ISAR-REACT 5 trial was published, comparing ticagrelor and prasugrel in acute coronary syndrome.[52]