Common side effects include bleeding.[4] Other serious side effects may include spinal hematoma and anaphylaxis.[4] It is unclear if use in pregnancy and breastfeeding is safe.[5] Compared to warfarin it has fewer interactions with other medications.[6] It works by blocking the activity of the clotting protein factor Xa.[4]

Rivaroxaban is used to treat venous thromboemblism (VTE); deep vein thrombosis and pulmonary embolism.[14][15] In July 2012, the UK's NICE added its use in prevention of VTE.[16][17] It can be used to prevent VTE in people having hip or knee replacement surgery.[14]

It can be used to prevent stroke and VTE in people with non-valvular atrial fibrillation (AF), who have had a stroke before or who also have heart failure, high blood pressure or diabetes in addition to the AF.[14] In those with non-valvular AF, it appears to be as effective as warfarin in preventing ischemic strokes and embolic events.[18]

Rivaroxaban can be considered as an alternative to warfarin, particularly if a person is on several other medications that interact with warfarin, or if attending medical appointments and laboratory monitoring becomes difficult.[6]

The dose and duration of rivaroxaban varies according to the condition it is being used for.[14]

It is best to avoid using rivaroxaban in people who cannot commit to taking their medication regularly without missing a dose.[6] Rivaroxaban is also not recommended when there is active bleeding or in those who have a high risk of bleeding such peptic ulcer disease or cancer.[14] Because of the difficulty associated with managing bleeding, rivaroxaban should be discontinued at least 24 hours before surgery, then restarted as soon as adequate hemostasis is established.[19]

Current dosing recommendations do not recommended administering rivaroxaban with drugs known to be strong combined CYP3A4/P-glycoprotein inhibitors because this results in significantly higher plasma concentrations of rivaroxaban.[20][21] Rivaroxaban is excreted in urine and faeces, with the result that for people with liver disease and kidney disease, a lower dose or an alternative may be more appropriate.[14]

Following a trial showing an increased chance of thrombotic events associated with rivaroxaban compared to warfarin, in people with Antiphospholipid syndrome with a history of previous thrombosis, Rivaroxaban is not recommended in people with antiphospholipd syndrome, especially if they have lupus anticoagulant, anticardiolipin antibodies, and anti-beta2 glycoprotein I antibodies.[10]

It is unclear if use in pregnancy and breastfeeding is safe.[5] As a result, it is not recommended for use in this group of people.[14]

Side effects include bleeding, the most common being nose bleeds, bloody urine and gastrointestinal bleeding,[14] but there can be severe internal bleeding.[22][23][24] Rivaroxaban is associated with lower rates of serious and fatal bleeding events than warfarin but is associated with higher rates of bleeding in the gastrointestinal tract.[14] Other side effects include dizziness and anemia.[14]

As of 2015[update], post-marketing assessments showed liver toxicity, and further studies are needed to quantify this risk.[25][26]

Rivaroxaban has a boxed warning to make clear that people using the medication should not discontinue it before talking with their health care professional, because premature discontinuation can increase the risk of stroke.[20]

In 2015, rivaroxaban accounted for the highest number of reported cases of serious injury among regularly monitored medications to the FDA's Adverse Events Reporting System (AERS).[27]

Taking more than the prescribed amount of rivaroxaban, or crushing, chewing or mixing it with other drugs or alcohol increases the risk of overdose, which can be fatal.[28]

In October 2014, Portola Pharmaceuticals completed Phase I and II clinical trials for andexanet alfa as an antidote for Factor Xa inhibitors with few adverse effects, and started Phase III trials.[29][30] Andexanet alfa was expected to be approved in 2016.[31] Andexanet alfa was approved by the U.S. Food and Drug Administration in May, 2018, under the trade name AndexXa.[32][33] It is also available in the UK.[34]

Rivaroxaban works by directly blocking Factor Xa rather than inhibiting thrombin.[16][35] It might also block Factor Xa that is bound to clot.[35] It is a highly selective direct Factor Xa inhibitor with a rapid onset of action and peak blocking activity of between 1-4 hours after being given.[35] Inhibition of Factor Xa interrupts the intrinsic and extrinsic pathway of the blood coagulation cascade, inhibiting both thrombin formation and development of thrombi. Rivaroxaban does not inhibit thrombin (activated Factor II), and no effects on platelets have been demonstrated.[2] It allows predictable anticoagulation and dose adjustments and routine coagulation monitoring;[2] dietary restrictions are not needed.[31]

Unfractionated heparin (UFH), low molecular weight heparin (LMWH), and fondaparinux also inhibit the activity of factor Xa, indirectly, by binding to circulating antithrombin (AT III) and must be injected, whereas the orally active warfarin, phenprocoumon, and acenocoumarol are vitamin K antagonists (VKA), decreasing a number of coagulation factors, including Factor X.[36]

Rivaroxaban has predictable pharmacokinetics across a wide spectrum of patients (age, gender, weight, race) and has a flat dose response across an eightfold dose range (5–40 mg).[37] The oral bioavailability decreases with higher doses and increases when taken with food.[20][38]

Since it works quickly, initial heparin usage is not required.[14]

Chemical structures of linezolid (top) and rivaroxaban (bottom). The shared structure is shown in blue.

Rivaroxaban bears a striking structural similarity to the antibiotic linezolid: both drugs share the same oxazolidinone-derived core structure. Accordingly, rivaroxaban was studied for any possible antimicrobial effects and for the possibility of mitochondrial toxicity, which is a known complication of long-term linezolid use. Studies found that neither rivaroxaban nor its metabolites have any antibiotic effect against Gram-positive bacteria. As for mitochondrial toxicity, in vitro studies published before 2008 found the risk to be low.[39]

Rivaroxaban was initially developed by Bayer.[3] In the United States, it is marketed by Janssen Pharmaceutica (a part of Johnson & Johnson).[40] It is the first available active direct factor Xa inhibitor which is taken by mouth.[41]

As of 2020, a month supply of rivaroxaban costs the NHS about £50 in the United Kingdom,[10] where its cost reaches more than 50 times that of warfarin, although this difference may be offset by lower monitoring costs.[14] In the United States, the wholesale cost of this amount is about US$430.[11] In 2017, it was the 109th most commonly prescribed medication in the United States, with more than six million prescriptions.[12][13]

Using rivaroxaban rather than warfarin costs 70 times more, according to Express Scripts Holding Co, the largest U.S. pharmacy benefits manager.[31] As of 2016, Bayer claimed that the drug was licensed in 130 countries and that more than 23 million people had been treated.[42]

On July 1, 2011, the United States Food and Drug Administration (US FDA) approved rivaroxaban for prophylaxis of deep vein thrombosis (DVT), which may lead to pulmonary embolism (PE), in adults undergoing hip and knee replacement surgery.[45]

On November 4, 2011, the US FDA approved rivaroxaban for stroke prevention in people with non-valvular atrial fibrillation.[46]

On March 25, 2019, over 25,000 lawsuits over rivaroxaban in the US were settled for $775 million to get paid out to those affected. Plaintiffs accused the drugmakers of not warning about the bleeding risks, claiming their injuries could have been prevented had doctors and patients been provided adequate information.[47] 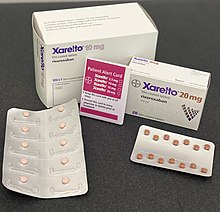 Researchers at the Duke Clinical Research Institute have been accused of withholding clinical data used to evaluate rivaroxaban.[48] Duke tested rivaroxaban in a clinical trial known as the ROCKET AF trial.[49] The clinical trial, published in 2011 in the New England Journal of Medicine[50] and headed by Robert Califf, then Commissioner of the FDA,[51][50] found rivaroxaban to be more effective than warfarin in reducing the likelihood of ischemic strokes in patients with atrial fibrillation.[50] The validity of the study was called into question in 2014 when pharmaceutical sponsors Bayer and Johnson & Johnson revealed that the INR blood monitoring devices used were not functioning properly,[48][49] A subsequent analysis by the Duke team published in February 2016 found that this had no significant effect on efficacy and safety in the trial.[52]

Under-representation of racial minorities in clinical trials has been noted. Compared to warfarin, efficacy and safety was found to be similar across racial subgroups.[50]