From WikiProjectMed
Jump to navigation Jump to search
"Tenofovir" redirects here. For the other prodrug of tenofovir, see Tenofovir alafenamide.

Tenofovir disoproxil, sold under the trade name Viread among others, is a medication used to treat chronic hepatitis B and to prevent and treat HIV/AIDS.[1] It is generally recommended for use with other antiretrovirals.[1] It may be used for prevention of HIV/AIDS among those at high risk before exposure, and after a needlestick injury or other potential exposure.[1] It is sold both by itself and together as emtricitabine/tenofovir and efavirenz/emtricitabine/tenofovir.[1] It does not cure HIV/AIDS or hepatitis B.[1][4] It is available by mouth as a tablet or powder.[1]

Common side effects include nausea, rash, diarrhea, headache, pain, depression, and weakness.[1] Severe side effects include high blood lactate and an enlarged liver.[1] There are no absolute contraindications.[1] It is often recommended during pregnancy and appears to be safe.[1] It is a nucleotide reverse transcriptase inhibitor and works by decreasing the ability of the viruses to replicate.[1]

Tenofovir disoproxil is used for HIV-1 infection and chronic hepatitis B treatment. For HIV-1 infection, tenofovir is indicated in combination with other antiretroviral agents for people 2 years of age and older. For chronic hepatitis B patients, tenofovir is indicated for patients 12 years of age and older.[10]

Tenofovir can be used for HIV prevention in people who are at high risk for infection through sexual transmission or injecting drug use. A Cochrane review examined the use of tenofovir for prevention of HIV before exposure and found that both tenofovir alone and the tenofovir/emtricitabine combination decreased the risk of contracting HIV for high risk patients.[11] The U.S. Centers for Disease Control and Prevention (CDC) also conducted a study in partnership with the Thailand Ministry of Public Health to ascertain the effectiveness of providing people who inject drugs illicitly with daily doses of tenofovir as a prevention measure. The results revealed a 48.9% reduced incidence of the virus among the group of subjects who received the drug in comparison to the control group who received a placebo.[12]

The defined daily dose is 245 mg (by mouth).[3] This is equivalent to 300 mg of tenofovir disoproxil fumarate of which a dose of 300 mg once per day is recommended for HIV/AIDS in those who weight more than 35 kg.[2] 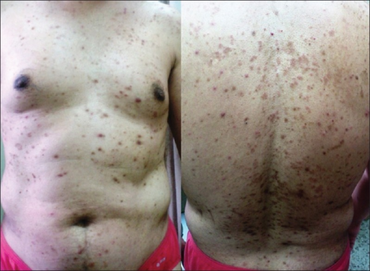 Tenofovir disoproxil is a nucleotide analog reverse-transcriptase inhibitor (NtRTI).[17] It selectively inhibits viral reverse transcriptase, a crucial enzyme in retroviruses such as human immunodeficiency virus (HIV), while showing limited inhibition of human enzymes, such as DNA polymerases α, β, and mitochondrial DNA polymerase γ.[10][17] In vivo tenofovir disoproxil fumarate is converted to tenofovir, an acyclic analog of deoxyadenosine 5'-monophosphate (d-AMP). Tenofovir lacks a hydroxyl group in the position corresponding to the 3' carbon of the d-AMP, preventing the formation of the 5′ to 3′ phosphodiester linkage essential for DNA chain elongation.[17] Once incorporated into a growing DNA strand, tenofovir causes premature termination of DNA transcription, preventing viral replication.[17]

Tenofovir disoproxil is a prodrug that is quickly absorbed from the gut and cleaved to release tenofovir.[10] Inside cells, tenofovir is phosphorylated to tenofovir diphosphate (which is analogous to a triphosphate, as tenofovir itself already has one phosphonate residue), the active compound that inhibits reverse transcriptase via chain termination.[16][17]

Tenofovir is mainly excreted via the kidneys, both by glomerular filtration and by tubular secretion using the transport proteins OAT1, OAT3 and ABCC4.[16]

Tenofovir may be measured in plasma by liquid chromatography. Such testing is useful for monitoring therapy and to prevent drug accumulation and toxicity in people with kidney or liver problems.[22][23][24]

Tenofovir was initially synthesized by Antonín Holý at the Institute of Organic Chemistry and Biochemistry of the Academy of Sciences of the Czech Republic in Prague. The patent[25] filed by Holý in 1984 makes no mention of the potential use of the compound for the treatment of HIV infection, which had only been discovered one year earlier.

In 1985, De Clercq and Holý described the activity of PMPA against HIV in cell culture.[26] Shortly thereafter, a collaboration with the biotechnology company Gilead Sciences led to the investigation of PMPA's potential as a treatment for HIV infected patients. In 1997 researchers from Gilead and the University of California, San Francisco demonstrated that tenofovir exhibits anti-HIV effects in humans when dosed by subcutaneous injection.[27]

Tenofovir disoproxil can be taken by mouth and is sold under the brand name Viread, among others.[30] Tenofovir disoproxil is a pro-drug form of tenofovir phosphonate, which is liberated intracellularly and converted to tenofovir disphophate.[31] It is marketed by Gilead Sciences (as the fumarate, abbreviated TDF).[32]

Gilead has created a second pro-drug form of the active drug, tenofovir diphosphate, called tenofovir alafenamide. It differs from tenofovir disoproxil due to its activation in the lymphoid cells. This allows the active metabolites to accumulate in those cells, leading to lower systemic exposure and potential toxicities.[13]