Raltegravir (RAL), sold under the brand name Isentress, is an antiretroviral medication used, together with other medication, to treat HIV/AIDS.[2] It may also be used, as part of post exposure prophylaxis, to prevent HIV infection following potential exposure.[3] It is taken by mouth.[2]

Common side effects include trouble sleeping, feeling tired, nausea, high blood sugar, and headaches.[3] Severe side effects may include allergic reactions including Stevens–Johnson syndrome, muscle breakdown, and liver problems.[3] It is unclear if use during pregnancy or breastfeeding is safe.[3] Raltegravir is an HIV integrase strand transfer inhibitor which blocks the functioning of HIV integrase which is needed for viral replication.[3]

Raltegravir was approved for medical use in the United States in 2007.[3] It is on the World Health Organization's List of Essential Medicines.[4] In the United Kingdom it costs the NHS about 472.00 pounds per month.[2] Lamivudine/raltegravir, a combination with lamivudine, is also available.[3] 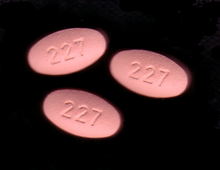 Raltegravir was initially approved only for use in individuals whose infection has proven resistant to other HAART drugs.[5] However, in July 2009, the FDA granted expanded approval for raltegravir for use in all patients.[6] As with any HAART medication, raltegravir is unlikely to show durability if used as monotherapy, due to the highly mutagenic nature of HIV. Raltegravir is taken orally twice daily.[5]

In December 2011, it approval for use in children over the age of two, taken in pill form orally twice a day by prescription with two other antiretroviral medications to form the cocktail (most anti-HIV drugs regimens for adults and children use these cocktails). Raltegravir is available in chewable form, but because the two tablet formulations are not interchangeable, the chewable pills are only approved for use in children two to 11. Older adolescents will use the adult formulation.[7]

In a study of the drug as part of combination therapy, raltegravir exhibited potent and durable antiretroviral activity similar to that of efavirenz at 24 and 48 weeks but achieved HIV-1 RNA levels below detection at a more rapid rate. After 24 and 48 weeks of treatment, raltegravir did not result in increased serum levels of total cholesterol, low-density lipoprotein cholesterol, or triglycerides.[8][9]

Raltegravir was generally well tolerated when used in combination with optimized background therapy regimens in treatment-experienced patients with HIV-1 infection in trials of up to 48 weeks' duration.[10]

As an integrase inhibitor, raltegravir targets integrase, an HIV enzyme that integrates the viral genetic material into human chromosomes, a critical step in the pathogenesis of HIV. The drug is metabolized away via glucuronidation.[11]

Raltegravir was the first integrase inhibitor to receive approval in the United States.[12][5][13]

In January 2013, a Phase II trial was initiated to evaluate the therapeutic benefit of raltegravir in treating multiple sclerosis (MS).[18] The drug is active against Human Endogenous Retroviruses (HERVs) and possibly Epstein–Barr virus, which have been suggested in the pathogenesis of relapsing-remitting MS.