Saquinavir (SQV), sold under the brand names Invirase and Fortovase, is an antiretroviral drug used together with other medications to treat or prevent HIV/AIDS.[4] Typically it is used with ritonavir or lopinavir/ritonavir to increase its effect.[4] It is taken by mouth.[4]

Common side effects include nausea, vomiting, diarrhea, and feeling tired.[4] More serious side effects include problems with QT prolongation, heart block, high blood lipids, and liver problems.[4] It appears to be safe in pregnancy.[4] It is in the protease inhibitor class and works by blocking the HIV protease.[4]

Saquinavir is used together with other medications to treat or prevent HIV/AIDS.[4] Typically it is used with ritonavir or lopinavir/ritonavir to increase its effect.[4]

The same dose is used in people with mild liver problems or kidney problems, though the medication is not recommended in those with severe liver problems.[4]

The most frequent adverse events with saquinavir in either formulation are mild gastrointestinal symptoms, including diarrhoea, nausea, loose stools and abdominal discomfort. Invirase is better tolerated than Fortovase.[medical citation needed]

In the clinic, it was found that the oral bioavailability of saquinavir in both formulations significantly increases when patients also receive the PI ritonavir. For patients, this has the major benefit that they can take less saquinavir, while maintaining sufficient saquinavir blood plasma levels to efficiently suppress the replication of HIV.[medical citation needed]

The mechanism behind this welcome observation was not directly known, but later it was determined that ritonavir inhibits the cytochrome P450 3A4 isozyme. Normally, this enzyme metabolizes saquinavir to an inactive form, but with the ritonavir inhibiting this enzyme, the saquinavir blood plasma levels increased considerably. Additionally, ritonavir also inhibits multidrug transporters, although to a much lower extent.[medical citation needed]

Unlike other protease inhibitors, the absorption of saquinavir seems to be improved by omeprazole.[10]

Saquinavir is a protease inhibitor. Proteases are enzymes that cleave protein molecules into smaller fragments. HIV protease is vital for both viral replication within the cell and release of mature viral particles from an infected cell. Saquinavir binds to the active site of the viral protease and prevents cleavage of viral polyproteins, preventing maturation of the virus. Saquinavir inhibits both HIV-1 and HIV-2 proteases.[medical citation needed] 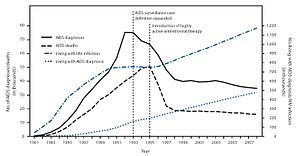 New HIV infections and deaths, before and after the FDA approval of "highly active antiretroviral therapy",[11] of which saquinavir, ritonavir and indinavir were key as the first three protease inhibitors.[citation needed] As a result of the new therapies, HIV deaths in the United States fell dramatically within two years.[11]

Saquinavir was developed by the pharmaceutical company Roche.[citation needed] Saquinavir was the sixth antiretroviral and the first protease inhibitor approved by the US Food and Drug Administration (FDA), leading ritonavir to approval by 4 months.[citation needed] As a result of the introduction of new "highly active antiretroviral thearap[ies]"—of which the protease inhibitors saquinavir and ritonavir were critical[citation needed]—the annual U.S. HIV-associated death rate fell from over 50,000 to about 18,000 over a period of two years.[11][12]

Roche requested and received approval of Invirase via the FDA's "Accelerated Approval" program—a process designed to speed drugs to market for the treatment of serious diseases—a decision that was controversial, as AIDS activists disagreed over the benefits of thorough testing versus early access to new drugs.[13][better source needed] It was approved again on November 7, 1997, as Fortovase,[14] a soft gel capsule reformulated for improved bioavailability. Roche announced in May 2005 that, given reduced demand, Fortovase would cease being marketed early in 2006, in favor of Invirase boosted with ritonavir,[15] owing to the ability of the latter co-formulated drug to inhibit the enzyme that metabolizes the AIDS drugs.[citation needed]

Two formulations have been marketed: