Phendimetrazine, sold under the brand name Bontril among others, is a medication used to treat obesity.[1] Use is only recommended for a few weeks.[1] It is used together with dieting and exercise.[1][2] It is taken by mouth.[1]

Common side effects include palpitations, fast heart rate, high blood pressure, agitation, trouble sleeping, headache, psychosis, and diarrhea.[1] Other side effects may include abuse, valvular heart disease, and pulmonary hypertension.[1] Use during pregnancy may harm the baby.[3] It is an amphetamine which works by decreasing appetite.[1]

For obesity in adults, it is taken at a dose of 35 mg immediate release two to three times per day.[1] A long acting formulation may be taken as 105 mg once per day.[1]

It is a stimulant drug of the morpholine chemical class used as an appetite suppressant.[6]

Indicated as a short-term secondary treatment for exogenous obesity, phendimetrazine immediate-release 35mg tablets are typically consumed one hour before meals, not to exceed three doses daily. Phendimetrazine is also manufactured as a 105mg extended-release capsule for once daily dosing, typically consumed 30 to 60 minutes before a morning meal. Whereas the immediate-release formulation has a maximum daily dosage of 210mg (6 tablets), the extended-release capsules have a maximum daily dosage of 105mg (one capsule). 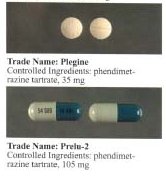