From WikiProjectMed
Jump to navigation Jump to search
For the town of ancient Bithynia in Asia Minor, see Psyllium (Bithynia). 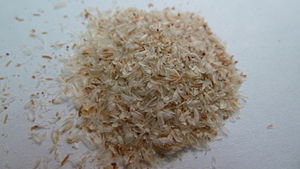 Psyllium /ˈsɪliəm/, or ispaghula (isabgol) /ˌɪspəˈɡuːlə/, is the common name used for several members of the plant genus Plantago whose seeds are used commercially for the production of mucilage. Psyllium is mainly used as a dietary fiber to relieve symptoms of both constipation and mild diarrhea, and occasionally as a food thickener.[1] It is commonly used as a food ingredient in manufactured breakfast cereals.

The plants from which the seeds are extracted tolerate dry and cool climates and are mainly cultivated in northern India.

Dietary supplements containing psyllium are sold mainly to aid weight loss, although there is little scientific evidence for such effects.[6]

Psyllium has been used as a thickener in ice cream and other frozen desserts. A 1.5% weight/volume ratio of psyllium mucilage exhibits binding properties that are superior to a 10% weight/volume ratio of starch mucilage.[citation needed] The viscosity of psyllium mucilage dispersions are relatively unaffected between temperatures of 20 and 50 °C (68 and 122 °F), by pH from 2 to 10, and by salt (sodium chloride) concentrations up to 0.15 M.[citation needed]

Psyllium is mainly used as a viscous, soluble dietary fiber that is not absorbed by the small intestine.[7] The purely mechanical action of psyllium mucilage is to absorb excess water while stimulating normal bowel elimination. Although its main use has been as a laxative, it is more accurately regarded as a dietary fiber and as such can help reduce the symptoms of both constipation and mild diarrhea.[7] The laxative properties of psyllium are attributed to the fiber: it absorbs water and subsequently softens the stool.[7] It increases flatulence (gas) to some degree.[8]

In 1998, the U.S. Food and Drug Administration approved a health claim on food labels for dietary psyllium as a soluble fiber – if consumed chronically – that would reduce the risk of heart disease by lowering blood cholesterol.[9] Clinical research demonstrated that seven grams or more per day of soluble fiber from psyllium seed husk would sufficiently lower total cholesterol and low density lipoprotein cholesterol in people with hypercholesterolemia, two accepted biomarkers for risk of coronary heart disease.[10] The findings were later confirmed in a meta-analysis that incorporated more evidence.[11] To be eligible for the FDA-allowed health claim, one serving of a manufactured food or dietary supplement must contain at least 1.7 g of psyllium as soluble fiber.[9] Whole oats, barley and foods containing beta-glucan soluble fiber were included as eligible sources for the label claim.[9]

In 2014, the U.S. Food and Drug Administration approved a qualified health claim for psyllium as a possible benefit for people with diabetes, requiring FDA-approved wording on a product label: "Psyllium husk may reduce the risk of type 2 diabetes, although the FDA has concluded that there is very little scientific evidence for this claim." [12] A meta-analysis published after the FDA decision reported that psyllium provided before meals improved fasting blood glucose and glycated hemoglobin, but that the larger effect was seen in people diagnosed with and being treated for type 2 diabetes, and only a modest improvement for people classified as pre-diabetic.[4]

Psyllium fiber dietary supplements are used in veterinary medicine to treat sand impaction in horses to aid in elimination of sand from the horse's colon.[13]

Fiber generally has few side effects.[14]

Psyllium can cause allergic reactions, including anaphylaxis.[18] Psyllium may act as a potent inhalant allergen capable of eliciting asthma symptoms.[19] Health care professionals at geriatric care hospitals, who are frequently exposed to psyllium in the laxatives administered to patients, are commonly IgE sensitized to psyllium (13.8%), and 8.6% have clinical allergy to psyllium.[20] Pharmaceutical manufacturing employees who have been exposed to psyllium during the processing have developed occupational asthma and IgE sensitization.[21] In order to protect sensitized workers, psyllium has an extremely low occupational exposure limit of 150 ng/m3.[22]

The soluble fiber in psyllium is the polysaccharide heteroxylan, a hemicellulose.[23]

Psyllium is produced mainly for its mucilage content. The term mucilage describes a group of clear, colorless, gelling agents derived from plants. The mucilage obtained from psyllium comes from the seed coat. Mucilage is obtained by mechanical milling (i.e. grinding) of the outer layer of the seed. Mucilage yield amounts to about 25% (by weight) of the total seed yield. Plantago-seed mucilage is often referred to as husk, or psyllium husk. The milled seed mucilage is a white fibrous material that is hydrophilic, meaning that its molecular structure causes it to attract and bind to water. Upon absorbing water, the clear, colorless, mucilaginous gel that forms increases in volume by tenfold or more.

The genus Plantago contains over 200 species. P. ovata and P. psyllium are produced commercially in several European countries, the former Soviet Union and India. Plantago seed, known commercially as black, French, or Spanish psyllium, is obtained from P. psyllium, also known as P. arenaria. Seed produced from P. ovata is known in trading circles as white or blonde psyllium, Indian plantago, or isabgol. Isabgol is the common name in India for P. ovata. it is known as Aspaghol in Pakistan, coming from the Persian asp and gul, meaning "horse flower", which is descriptive of the shape of the seed. India dominates the world market in the production and export of psyllium.

Plantago ovata is an annual herb that grows to a height of 30–46 cm (12–18 in). Leaves are opposite, linear or linear lanceolate 1 cm × 19 cm (0.39 in × 7.48 in). The root system has a well-developed tap root with few fibrous secondary roots. A large number of flowering shoots arise from the base of the plant. Flowers are numerous, small, and white. Plants flower about 60 days after planting. The seeds are enclosed in capsules that open at maturity.

The fields are generally irrigated prior to seeding to achieve ideal soil moisture, to enhance seed soil contact, and to avoid burying the seed too deeply as a result of later irrigations or rainfall. Maximum germination occurs at a seeding depth of 6 mm (1/4 in). Emerging seedlings are frost sensitive; therefore, planting should be delayed until conditions are expected to remain frost free. Seed is broadcast at 5.5 to 8.25 kg/hectare (5 to 7.5 lb/acre) in India. In Arizonan trials, seeding rates of 22 to 27.5 kg/ha (20 to 25 lb/acre) resulted in stands of 1 plant/25mm (1 inch) in 15 cm (6 inch) rows produced excellent yields. Weed control is normally achieved by one or two hand weedings early in the growing season. Control of weeds by pre-plant irrigation that germinates weed seeds followed by shallow tillage may be effective on fields with minimal weed pressure. Psyllium is a poor competitor with most weed species.

The flower spikes turn reddish brown at ripening, the lower leaves dry and the upper leaves yellow. The crop is harvested in the morning after the dew is gone to minimize shattering and field losses. In India, mature plants are cut 15 cm above the ground and then bound, left for a few days to dry, thrashed, and winnowed.

Harvested seed must be dried to below 12% moisture to allow for cleaning, milling, and storage. Seed stored for future crops has shown a significant loss in viability after 2 years in storage.

Introduced in 1934 by G. D. Searle & Company, Metamucil was acquired by Procter & Gamble in 1985. The name is a combination of the Greek word for change (meta) and the class of fiber that it utilizes (mucilage). In its early years, Metamucil achieved sporadic drug-store distribution as a "behind the counter" brand. Since 1974, the brand was also marketed to consumers via print and TV advertising and became available in food outlets. Flavored versions were added in 1979.

The brand is sold as powdered drink mixes, capsules and wafers in a variety of flavors. Metamucil contains psyllium seed husks as the active ingredient. It is manufactured in Phoenix, Arizona by Procter & Gamble.[24] When first marketed to consumers in 1974, Metamucil was marketed as a laxative. The advertising claim at that time was "If not nature, then Metamucil". Procter & Gamble sought to make Metamucil a household name by advertising in magazines and on television, using the claim "All fiber is not created equal".[25]

The Metamucil trademark is owned by Procter & Gamble and was first approved in 1934.[26] The Metamucil logo has been updated numerous times over the brand's history, most recently in 2014.[27]