Pelvic inflammatory disease, also known as pelvic inflammatory disorder (PID), is an infection of the upper part of the female reproductive system, namely the uterus, fallopian tubes, and ovaries, and inside of the pelvis.[5][2] Often, there may be no symptoms.[1] Signs and symptoms, when present, may include lower abdominal pain, vaginal discharge, fever, burning with urination, pain with sex, bleeding after sex, or irregular menstruation.[1] Untreated PID can result in long-term complications including infertility, ectopic pregnancy, chronic pelvic pain, and cancer.[2][3][4]

The disease is caused by bacteria that spread from the vagina and cervix.[5] Infections by Neisseria gonorrhoeae or Chlamydia trachomatis are present in 75 to 90 percent of cases.[2] Often, multiple different bacteria are involved.[2] Without treatment, about 10 percent of those with a chlamydial infection and 40 percent of those with a gonorrhea infection will develop PID.[2][9] Risk factors are generally similar to those of sexually transmitted infections and include a high number of sexual partners and drug use.[2] Vaginal douching may also increase the risk.[2] The diagnosis is typically based on the presenting signs and symptoms.[2] It is recommended that the disease be considered in all women of childbearing age who have lower abdominal pain.[2] A definitive diagnosis of PID is made by finding pus involving the fallopian tubes during surgery.[2] Ultrasound may also be useful in diagnosis.[2]

Efforts to prevent the disease include not having sex or having few sexual partners and using condoms.[6] Screening women at risk for chlamydial infection followed by treatment decreases the risk of PID.[10] If the diagnosis is suspected, treatment is typically advised.[2] Treating a woman's sexual partners should also occur.[10] In those with mild or moderate symptoms, a single injection of the antibiotic ceftriaxone along with two weeks of doxycycline and possibly metronidazole by mouth is recommended.[7] For those who do not improve after three days or who have severe disease, intravenous antibiotics should be used.[7]

Globally, about 106 million cases of chlamydia and 106 million cases of gonorrhea occurred in 2008.[9] The number of cases of PID, however, is not clear.[8] It is estimated to affect about 1.5 percent of young women yearly.[8] In the United States, PID is estimated to affect about one million people each year.[11] A type of intrauterine device (IUD) known as the Dalkon shield led to increased rates of PID in the 1970s.[2] Current IUDs are not associated with this problem after the first month.[2] 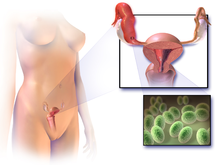 Symptoms in PID range from none to severe. If there are symptoms, then fever, cervical motion tenderness, lower abdominal pain, new or different discharge, painful intercourse, uterine tenderness, adnexal tenderness, or irregular menstruation may be noted.[2][1][12][13]

PID can cause scarring inside the reproductive system, which can later cause serious complications, including chronic pelvic pain, infertility, ectopic pregnancy (the leading cause of pregnancy-related deaths in adult females), and other complications of pregnancy.[15] Occasionally, the infection can spread to the peritoneum causing inflammation and the formation of scar tissue on the external surface of the liver (Fitz-Hugh–Curtis syndrome).[16]

Chlamydia trachomatis and Neisseria gonorrhoeae are usually the main cause of PID. Data suggest that PID is often polymicrobial.[14] Isolated anaerobes and facultative microorganisms have been obtained from the upper genital tract. N. gonorrhoeae has been isolated from fallopian tubes, facultative and anaerobic organisms were recovered from endometrial tissues.[17][18]

The anatomical structure of the internal organs and tissues of the female reproductive tract provides a pathway for pathogens to ascend from the vagina to the pelvic cavity thorough the infundibulum. The disturbance of the naturally occurring vaginal microbiota associated with bacterial vaginosis increases the risk of PID.[17]

Rarely cases of PID have developed in people who have stated they have never had sex.[19] 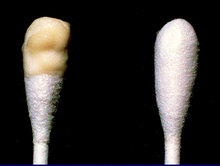 Upon a pelvic examination, cervical motion, uterine, or adnexal tenderness will be experienced.[5] Mucopurulent cervicitis and or urethritis may be observed. In severe cases more testing may be required such as laparoscopy, intra-abdominal bacteria sampling and culturing, or tissue biopsy.[14][21]

Laparoscopy can visualize "violin-string" adhesions, characteristic of Fitz-Hugh–Curtis perihepatitis and other abscesses that may be present.[21]

Other imaging methods, such as ultrasonography, computed tomography (CT), and magnetic imaging (MRI), can aid in diagnosis.[21] Blood tests can also help identify the presence of infection: the erythrocyte sedimentation rate (ESR), the C-reactive protein (CRP) level, and chlamydial and gonococcal DNA probes.[14][21]

Nucleic acid amplification tests (NAATs), direct fluorescein tests (DFA), and enzyme-linked immunosorbent assays (ELISA) are highly sensitive tests that can identify specific pathogens present. Serology testing for antibodies is not as useful since the presence of the microorganisms in healthy people can confound interpreting the antibody titer levels, although antibody levels can indicate whether an infection is recent or long-term.[14]

Definitive criteria include histopathologic evidence of endometritis, thickened filled Fallopian tubes, or laparoscopic findings. Gram stain/smear becomes definitive in the identification of rare, atypical and possibly more serious organisms.[22] Two thirds of patients with laparoscopic evidence of previous PID were not aware they had PID, but even asymptomatic PID can cause serious harm.

Upon gynecologic ultrasound, a potential finding is tubo-ovarian complex, which is edematous and dilated pelvic structures as evidenced by vague margins, but without abscess formation.[24]

A number of other causes may produce similar symptoms including appendicitis, ectopic pregnancy, hemorrhagic or ruptured ovarian cysts, ovarian torsion, and endometriosis and gastroenteritis, peritonitis, and bacterial vaginosis among others.[2]

Pelvic inflammatory disease is more likely to reoccur when there is a prior history of the infection, recent sexual contact, recent onset of menses, or an IUD (intrauterine device) in place or if the partner has a sexually transmitted infection.[25]

Acute pelvic inflammatory disease is highly unlikely when recent intercourse has not taken place or an IUD is not being used. A sensitive serum pregnancy test is typically obtained to rule out ectopic pregnancy. Culdocentesis will differentiate hemoperitoneum (ruptured ectopic pregnancy or hemorrhagic cyst) from pelvic sepsis (salpingitis, ruptured pelvic abscess, or ruptured appendix).[26]

Pelvic and vaginal ultrasounds are helpful in the diagnosis of PID. In the early stages of infection, the ultrasound may appear normal. As the disease progresses, nonspecific findings can include free pelvic fluid, endometrial thickening, uterine cavity distension by fluid or gas. In some instances the borders of the uterus and ovaries appear indistinct. Enlarged ovaries accompanied by increased numbers of small cysts correlates with PID.[26]

Laparoscopy is infrequently used to diagnose pelvic inflammatory disease since it is not readily available. Moreover, it might not detect subtle inflammation of the fallopian tubes, and it fails to detect endometritis.[27] Nevertheless, laparoscopy is conducted if the diagnosis is not certain or if the person has not responded to antibiotic therapy after 48 hours.[citation needed]

No single test has adequate sensitivity and specificity to diagnose pelvic inflammatory disease. A large multisite U.S. study found that cervical motion tenderness as a minimum clinical criterion increases the sensitivity of the CDC diagnostic criteria from 83 percent to 95 percent. However, even the modified 2002 CDC criteria do not identify women with subclinical disease.[28]

Regular testing for sexually transmitted infections is encouraged for prevention.[29] The risk of contracting pelvic inflammatory disease can be reduced by the following:

File:17605 lores.jpg
This image depicts a view of view of a uterus and ovary that had been excised, due to the presence of an ovarian abscess in a case of pelvic inflammatory disease (PID), which had been caused by an undisclosed anaerobic bacterium.

Treatment is often started without confirmation of infection because of the serious complications that may result from delayed treatment. Treatment depends on the infectious agent and generally involves the use of antibiotic therapy although there is no clear evidence of which antibiotic regimen is more effective and safe in the management of PID.[32] If there is no improvement within two to three days, the patient is typically advised to seek further medical attention. Hospitalization sometimes becomes necessary if there are other complications. Treating sexual partners for possible STIs can help in treatment and prevention.[10]

For women with PID of mild to moderate severity, parenteral and oral therapies appear to be effective.[33][34] It does not matter to their short- or long-term outcome whether antibiotics are administered to them as inpatients or outpatients.[35] Typical regimens include cefoxitin or cefotetan plus doxycycline, and clindamycin plus gentamicin. An alternative parenteral regimen is ampicillin/sulbactam plus doxycycline. Erythromycin-based medications can also be used.[36] A single study suggests superiority of azithromycin over doxycycline.[32] Another alternative is to use a parenteral regimen with ceftriaxone or cefoxitin plus doxycycline.[25] Clinical experience guides decisions regarding transition from parenteral to oral therapy, which usually can be initiated within 24–48 hours of clinical improvement.[27]

Even when the PID infection is cured, effects of the infection may be permanent. This makes early identification essential. Treatment resulting in cure is very important in the prevention of damage to the reproductive system. Formation of scar tissue due to one or more episodes of PID can lead to tubal blockage, increasing the risk of the inability to get pregnant and long-term pelvic/abdominal pain.[37] Certain occurrences such as a post pelvic operation, the period of time immediately after childbirth (postpartum), miscarriage or abortion increase the risk of acquiring another infection leading to PID.[25]

Globally about 106 million cases of chlamydia and 106 million cases of gonorrhea occurred in 2008.[9] The number of cases of PID; however, is not clear.[8] It is estimated to affect about 1.5 percent of young women yearly.[8] In the United States PID is estimated to affect about one million people yearly.[11] Rates are highest with teenagers and first time mothers. PID causes over 100,000 women to become infertile in the US each year.[38][39]