Goserelin, sold under the brand name Zoladex among others, is a medication used to treat prostate cancer, breast cancer, endometriosis, dysfunctional uterine bleeding, and uterine fibroids.[1][2] In prostate cancer it may be used instead of testicle removal.[2] It is given by injection under the skin.[1]

Common side effects include hot flushes, sexual dysfunction, depression, and pain.[2] Other side effects may include pituitary apoplexy, QT prolongation, osteoporosis, and anaphylaxis.[2]> Use in pregnancy may harm the baby.[2] It is a gonadotropin releasing hormone agonist (GnRH agonist) which results in decreased follicle stimulating hormone (FSH) and luteinising hormone (LH) followed by decreased androgen and estrogen.[1]

Goserelin was patented in 1976 and approved for medical use in 1987.[3] It is on the World Health Organization's List of Essential Medicines as an alternative to leuprorelin.[4] In the United Kingdom a 3.6 mg implant costs the NHS about £70 as of 2021.[1] This amount in the United States is about 600 USD.[5]

Goserelin is used to treat hormone-sensitive cancers of the breast (in pre- and peri-menopausal women) and prostate, and some benign gynaecological disorders (endometriosis, uterine fibroids and endometrial thinning). In addition, goserelin is used in assisted reproduction and in the treatment of precocious puberty. It may also be used in the treatment of male-to-female transgender people[6] and is favoured above other anti-androgens in some countries, such as the UK.

Goserelin is administered by subcutaneous injection as an implant every 28 days for the duration of treatment.[7] It is available as a 1-month depot and a long-acting 3-month depot.[1] It may be used at a dose of 3.6 mg every 4 weeks of 10.8 mg every 12 weeks.[1]

Goserelin may cause a temporary increase in bone pain and symptoms of prostatic cancer during the first few weeks of treatment. This is known as the tumour flare effect, and is the result of an initial increase in luteinizing hormone production, before the receptors are desensitised and hormonal production is inhibited. The symptoms will disappear, with hormonal inhibition. It is therefore advisable to co-treat with an antiandrogen during the first 2–3 weeks of goserelin treatment, particularly in patients with pre-existing bone symptoms.

Goserelin may cause bone pain, hot flushes, headache, stomach upset, depression, difficulty urinating (isolated cases), weight gain, swelling and tenderness of breasts (infrequent), decreased erections and reduced sexual desire. Bone pain can be managed symptomatically, and erectile dysfunction can be treated by vardenafil (Levitra) or other similar oral therapies, although they will not treat the reduced sexual desire. The rates of gynecomastia with goserelin have been found to range from 1 to 5%.[8]

Short-term memory impairment has also been reported in women and may in some cases be severe, but this effect disappears gradually once treatment is discontinued.[9][10]

Goserelin is a synthetic analogue of a naturally occurring gonadotropin-releasing hormone (GnRH). Bioavailability is almost complete by injection. Goserelin is poorly protein-bound and has a serum elimination half-life of two to four hours in patients with normal renal function. The half-life increases with patients with impaired renal function. There is no significant change in pharmacokinetics in subjects with liver failure. After administration, peak serum concentrations are reached in about two hours. It rapidly binds to the GnRH receptor cells in the pituitary gland thus leading to an initial increase in production of luteinizing hormone and thus leading to an initial increase in the production of corresponding sex hormones. This initial flare may be treated by co-prescribing/co-administering an androgen receptor antagonist such as bicalutamide (Casodex). Eventually, after a period of about 14–21 days, production of LH is greatly reduced due to receptor downregulation, and sex hormones are generally reduced to castrate levels.[11]

Goserelin is a GnRH analogue and decapeptide. It is provided as the acetate salt. 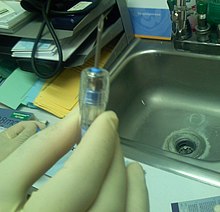 Goserelin is the generic name of the drug and its INN, USAN, and BAN.