A subdural hematoma (SDH) is when a collection of blood forms between the inner layer of the dura mater and the arachnoid mater of the meninges surrounding the brain.[2] Symptoms may include headache, confusion, personality change, and loss of consciousness.[1] Complications may include brain herniation and seizures.[2]

It usually results from a traumatic brain injury when a tear occurs in a bridging vein that cross the subdural space.[2] In children trauma may occur accidentally or intentionally.[2] No trauma related causes include blood thinners, aneurysms, brain tumors, following lumbar puncture, and spontaneous.[3] Alcoholism is a risk factor.[1] Diagnosis is generally by CT scan.[4]

Treatment may involve surgery especially if the bleed is sudden in onset and large in size.[3] Surgery typically involves a craniotomy or burr holes.[1] Small subdurals may be closely monitored.[1]

If the bleeds are large enough to put pressure on the brain, signs of increased intracranial pressure or brain damage will be present.[9] Other symptoms of subdural hematoma can include any combination of the following:

Subdural hematomas are most often caused by head injury, in which rapidly changing velocities within the skull may stretch and tear small bridging veins. Much more common than epidural hemorrhages, subdural hemorrhages generally result from shearing injuries due to various rotational or linear forces.[9][10] There are claims that they can occur in cases of shaken baby syndrome, although there is no scientific evidence for this (Lynoe et al. 2017).

They are also commonly seen in the elderly and in alcoholics who have evidence of cerebral atrophy. Cerebral atrophy increases the length the bridging veins have to traverse between the two meningeal layers, thus increasing the likelihood of shearing forces causing a tear. It is also more common in patients on anticoagulants or antiplatelet medications, such as warfarin and aspirin, respectively. People on these medications can have a subdural hematoma after a relatively minor traumatic event. Another cause can be a reduction in cerebrospinal fluid pressure, which can reduce pressure in the subarachnoid space, pulling the arachnoid away from the dura mater and leading to a rupture of the blood vessels.

Factors increasing the risk of a subdural hematoma include very young or very old age. As the brain shrinks with age, the subdural space enlarges and the veins that traverse the space must cover a wider distance, making them more vulnerable to tears. The elderly also have more brittle veins, making chronic subdural bleeds more common.[11] Infants, too, have larger subdural spaces and are more predisposed to subdural bleeds than are young adults.[9] It is often claimed that subdural hematoma is a common finding in shaken baby syndrome, although there is no science to support this.[12] In juveniles, an arachnoid cyst is a risk factor for subdural hematoma.[13]

Micrograph of a chronic subdural hematoma, as demonstrated by thin strands of collagen and neovascularization. HPS stain

Acute subdural hematoma is usually caused by external trauma that creates tension in the wall of a bridging vein as it passes between the arachnoid and dural layers of the brain's lining—i.e., the subdural space. The circumferential arrangement of collagen surrounding the vein makes it susceptible to such tearing.

Intracerebral hemorrhage and ruptured cortical vessels (blood vessels on the surface of the brain) can also cause subdural hematoma. In these cases, blood usually accumulates between the two layers of the dura mater. This can cause ischemic brain damage by two mechanisms: one, pressure on the cortical blood vessels,[15] and two, vasoconstriction due to the substances released from the hematoma, which causes further ischemia by restricting blood flow to the brain.[16] When the brain is denied adequate blood flow, a biochemical cascade known as the ischemic cascade is unleashed, and may ultimately lead to brain cell death.[17]

Subdural hematomas grow continually larger as a result of the pressure they place on the brain: As intracranial pressure rises, blood is squeezed into the dural venous sinuses, raising the dural venous pressure and resulting in more bleeding from the ruptured bridging veins. They stop growing only when the pressure of the hematoma equalizes with the intracranial pressure, as the space for expansion shrinks.[15]

In chronic subdural hematomas, blood accumulates in the dural space as a result of damage to the dural border cells.[18] The resulting inflammation leads to new membrane formation through fibrosis and produces fragile and leaky blood vessels through angiogenesis, permitting the leakage of red blood cells, white blood cells, and plasma into the hematoma cavity. Traumatic tearing of the arachnoid mater also causes leakage of cerebrospinal fluid into the hematoma cavity, increasing the size of the hematoma over time. Excessive fibrinolysis also causes continuous bleeding.

Craniotomy for unruptured intracranial aneurysm is another risk factor for the development of chronic subdural hematoma. The incision in the arachnoid membrane during the operation causes cerebrospinal fluid to leak into the subdural space, leading to inflammation. This complication usually resolves on its own.[19]

It is important that a person receive medical assessment, including a complete neurological examination, after any head trauma. A CT scan or MRI scan will usually detect significant subdural hematomas. 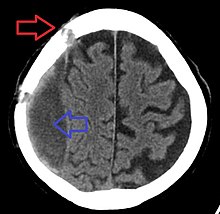 On a CT scan, subdural hematomas are classically crescent-shaped, with a concave surface away from the skull. However, they can have a convex appearance, especially in the early stages of bleeding. This may cause difficulty in distinguishing between subdural and epidural hemorrhages. A more reliable indicator of subdural hemorrhage is its involvement of a larger portion of the cerebral hemisphere. Subdural blood can also be seen as a layering density along the tentorium cerebelli. This can be a chronic, stable process, since the feeding system is low-pressure. In such cases, subtle signs of bleeding—such as effacement of sulci or medial displacement of the junction between gray matter and white matter—may be apparent.

Fresh subdural bleeding is hyperdense, but becomes more hypodense over time due to dissolution of cellular elements. After 3–14 days, the bleeding becomes isodense with brain tissue and may therefore be missed.[22] Subsequently, it will become more hypodense than brain tissue.

Subdural hematomas are classified as acute, subacute, or chronic, depending on the speed of their onset.[23]

Acute bleeds often develop after high-speed acceleration or deceleration injuries. They are most severe if associated with cerebral contusions.[9] Though much faster than chronic subdural bleeds, acute subdural bleeding is usually venous and therefore slower than the arterial bleeding of an epidural hemorrhage. Acute subdural hematomas due to trauma are the most lethal of all head injuries and have a high mortality rate if they are not rapidly treated with surgical decompression.[24] The mortality rate is higher than that of epidural hematomas and diffuse brain injuries because the force required to cause subdural hematomas tends to cause other severe injuries as well.[25]

Chronic subdural bleeds develop over a period of days to weeks, often after minor head trauma, though a cause is not identifiable in 50% of patients.[11] They may not be discovered until they present clinically months or years after a head injury.[26] The bleeding from a chronic hematoma is slow and usually stops by itself.[10][16] Because these hematomas progress slowly, they can more often be stopped before they cause significant damage, especially if they are less than a centimeter wide. In one study, only 22% of patients with chronic subdural bleeds had outcomes worse than "good" or "complete recovery".[9] Chronic subdural hematomas are common in the elderly.[26]

Treatment of a subdural hematoma depends on its size and rate of growth. Some small subdural hematomas can be managed by careful monitoring as the blood clot is eventually resorbed naturally. Others can be treated by inserting a small catheter through a hole drilled through the skull and sucking out the hematoma.

Large or symptomatic hematomas require a craniotomy. A surgeon opens the skull and then the dura mater; removes the clot with suction or irrigation; and identifies and controls sites of bleeding.[28][29] The injured vessels must be repaired. Postoperative complications can include increased intracranial pressure, brain edema, new or recurrent bleeding, infection, and seizures. In patients with a chronic subdural hematoma but no history of seizures, it is unclear whether anticonvulsants are harmful or beneficial.[30]

Acute subdural hematomas have one of the highest mortality rates of all head injuries, with 50 to 90 percent of cases resulting in death.[31] About 20 to 30 percent of patients recover brain function.[32]