A bone tumor is a neoplastic growth of tissue in bone. Abnormal growths found in the bone can be either benign (noncancerous) or malignant (cancerous).

Average five-year survival in the United States after being diagnosed with bone and joint cancer is 67%.[1]

The most common symptom of bone tumors is pain, which will gradually increase over time. A person may go weeks, months, and sometimes years before seeking help; the pain increases with the growth of the tumor. Additional symptoms may include fatigue, fever, weight loss, anemia, nausea, and unexplained bone fractures. Many patients will not experience any symptoms, except for a painless mass. Some bone tumors may weaken the structure of the bone, causing pathologic fractures.[2] 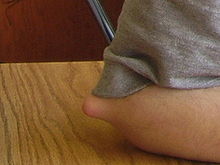 Bone tumors may be classified as "primary tumors", which originate in bone or from bone-derived cells and tissues, and "secondary tumors" which originate in other sites and spread (metastasize) to the skeleton. Carcinomas of the prostate, breasts, lungs, thyroid, and kidneys are the carcinomas that most commonly metastasize to bone. Secondary malignant bone tumors are estimated to be 50 to 100 times as common as primary bone cancers.

Primary tumors of bone can be divided into benign tumors and cancers. Common benign bone tumors may be neoplastic, developmental, traumatic, infectious, or inflammatory in etiology. Some benign tumors are not true neoplasms, but rather, represent hamartomas, namely the osteochondroma. The most common locations for many primary tumors, both benign and malignant include the distal femur and proximal tibia (around the knee joint).

While malignant fibrous histiocytoma (MFH) - now generally called "pleomorphic undifferentiated sarcoma" - primary in bone is known to occur occasionally,[3] current paradigms tend to consider MFH a "wastebasket" diagnosis, and the current trend is toward using specialized studies (i.e. genetic and immunohistochemical tests) to classify these undifferentiated tumors into other tumor classes. Multiple myeloma is a hematologic cancer, originating in the bone marrow, which also frequently presents as one or more bone lesions.

Germ cell tumors, including teratoma, often present and originate in the midline of the sacrum, coccyx, or both. These sacrococcygeal teratomas are often relatively amenable to treatment.

Secondary bone tumors are metastatic lesions which have spread from other organs, most commonly carcinomas of the breast, lung, and prostate. Rarely, primary bone malignancies such as osteosarcoma may also spread to other bones.

Reliable and valid statistics on the incidence, prevalence, and mortality of malignant bone tumors are difficult to come by, particularly in the oldest (those over 75 years of age) - because carcinomas that are widely metastatic to bone are rarely ever curable, biopsies to determine the origin of the tumor in cases like this are rarely done.

Treatment of bone tumors is highly dependent on the type of tumor.

Chemotherapy and radiotherapy are effective in some tumors (such as Ewing's sarcoma) but less so in others (such as chondrosarcoma).[5] There is a variety of chemotherapy treatment protocols for bone tumors. The protocol with the best-reported survival in children and adults is an intra-arterial protocol where tumor response is tracked by serial arteriogram. When tumor response has reached >90% necrosis surgical intervention is planned.[6][7]

One of the major concerns is bone density and bone loss. Non-hormonal bisphosphonates increase bone strength and are available as once-a-week prescription pills. Metastron also known as strontium-89 chloride is an intravenous medication given to help with the pain and can be given in three-month intervals. Generic Strontium Chloride Sr-89 Injection UPS, manufactured by Bio-Nucleonics Inc., it is the generic version of Metastron.[8]

Treatment for some bone cancers may involve surgery, such as limb amputation, or limb sparing surgery (often in combination with chemotherapy and radiation therapy). Limb sparing surgery, or limb salvage surgery, means the limb is spared from amputation. Instead of amputation, the affected bone is removed and replaced in one of two ways: (a) bone graft, in which bone is taken from elsewhere on the body or (b) artificial bone is put in. In upper leg surgeries, limb salvage prostheses are available.

The other surgery is called Van Nes rotation or rotationplasty which is a form of amputation, in which the patient's foot is turned upwards in a 180-degree turn and the upturned foot is used as a knee.

The most radical of amputations is hemicorporectomy (translumbar or waist amputation) which removes the legs, the pelvis, urinary system, excretory system and the genital area (penis/testes in males and vagina/vulva in females). This operation is done in two stages. First stage is doing the colostomy and the urinary conduit, the second stage is the amputation. This is a mutilating operation and is only done as a last resort (e.g. when even pelvic exenteration does not work or in cases of advanced pelvic/reproductive cancers)

CT guided radiofrequency ablation is a less invasive alternative to surgical removal in the care of benign bone tumors, most notably osteoid osteomas. In this technique, which can be performed under precedural sedation, a RF probe is introduced into the tumor nidus through a cannulated needle under CT guidance and heat is applied locally to destroy tumor cells. Since the procedure was first introduced for the treatment of osteoid osteomas in the early 1990s,[9] it has been shown in numerous studies to be less invasive and expensive, to result in less bone destruction and to have equivalent safety and efficacy to surgical techniques, with 66 to 96% of patients reporting freedom from symptoms.[10][11][12] While initial success rates with RFA are high, symptom recurrence after RFA treatment has been reported, with some studies demonstrating a recurrence rate similar to that of surgical treatment.[13]

Thermal ablation techniques are also increasingly being used in the palliative treatment of painful metastatic bone disease. Currently, external beam radiation therapy is the standard of care for patients with localized bone pain due to metastatic disease. Although the majority of patients experience complete or partial relief of pain following radiation therapy, the effect is not immediate and has been shown in some studies to be transient in more than half of patients.[14] For patients who are not eligible or do not respond to traditional therapies ( i.e. radiation therapy, chemotherapy, palliative surgery, bisphosphonates or analgesic medications), thermal ablation techniques have been explored as alternatives for pain reduction. Several multi-center clinical trials studying the efficacy of RFA in the treatment of moderate to severe pain in patients with metastatic bone disease have shown significant decreases in patient reported pain after treatment.[15][16] These studies are limited however to patients with one or two metastatic sites; pain from multiple tumors can be difficult to localize for directed therapy. More recently, cryoablation has also been explored as a potentially effective alternative as the area of destruction created by this technique can be monitored more effectively by CT than RFA, a potential advantage when treating tumors adjacent to critical structures.[17]

The outlook depends on the type of tumor. The outcome is expected to be good for people with noncancerous (benign) tumors, although some types of benign tumors may eventually become cancerous (malignant). With malignant bone tumors that have not spread, most patients achieve a cure, but the cure rate depends on the type of cancer, location, size, and other factors.