Osteosarcoma (OS) is a type of bone cancer of the osteogenic type.[1][3] The most common initial symptom is bone pain, which often gets worse with exercise.[1] In children more than half of cases occur in the long bones around the knee.[2] Spread of the cancer often occurs.[2] Other complications may include a pathologic fracture.[1]

Treatment may include surgery, chemotherapy, and radiation therapy.[1] Ongoing follow up is required to look for re-occurrence.[1] The 5-year survival rate in those under 15 is about 76%.[2] Outcomes are worse in adults.[1]

Many people first complain of pain that may be worse at night, may be intermittent and of varying intensity and may have been occurring for some time. Teenagers who are active in sports often complain of pain in the lower femur, or immediately below the knee. If the tumor is large, it can present as overt localised swelling. Sometimes a sudden fracture is the first symptom, because the affected bone is not as strong as normal bone and may fracture abnormally with minor trauma. In cases of more deep-seated tumors that are not as close to the skin, such as those originating in the pelvis, localised swelling may not be apparent.[citation needed]

Several research groups are investigating cancer stem cells and their potential to cause tumors along with genes and proteins causative in different phenotypes.[5][6][7] Radiotherapy for unrelated conditions may be a rare cause.[8]

There is no clear association between water fluoridation and cancer or deaths due to cancer, both for cancer in general and also specifically for bone cancer and osteosarcoma.[10] Series of research concluded that concentration of fluoride in water doesn't associate with osteosarcoma. The beliefs regarding association of fluoride exposure and osteosarcoma stem from a study of US National Toxicology program in 1990, which showed uncertain evidence of association of fluoride and osteosarcoma in male rats. But there is still no solid evidence of cancer-causing tendency of fluoride in mice.[11] Fluoridation of water has been practiced around the world to improve citizens' dental health. It is also deemed as major health success.[12] Fluoride concentration levels in water supplies are regulated, such as United States Environmental Protection Agency regulates fluoride levels to not be greater than 4 milligrams per liter.[13] Actually, water supplies already have natural occurring fluoride, but many communities chose to add more fluoride to the point that it can reduce tooth decay.[14] Fluoride is also known for its ability to cause new bone formation.[15] Yet, further research shows no osteosarcoma risks from fluoridated water in humans.[16] Most of the research involved counting the number of osteosarcoma cases in particular areas which has difference concentrations of fluoride in drinking water.[17] The statistic analysis of the data shows no significant difference in occurrences of osteosarcoma cases in different fluoridated regions.[18] Another important research involved collecting bone samples from people with osteosarcoma to measure fluoride concentration and compare them to bone samples of newly diagnosed malignant bone tumors. The result is that the median fluoride concentrations in bone samples of people with osteosarcoma and tumor controls are not significantly different.[19] Not only fluoride concentration in bones, fluoride exposures of people with osteosarcoma are also proven to be not different from healthy people.[20]

Osteosarcomas tend to occur at the sites of bone growth, presumably because proliferation makes osteoblastic cells in this region prone to acquire mutations that could lead to transformation of cells (the RB gene and p53 gene are commonly involved). Due to this tendency, high incidence of osteosarcoma is seen in some large dog breeds (St. Bernards and Great Danes). The tumor may be localized at the end of the long bone (commonly in the metaphysis). Most often it affects the proximal end of tibia or humerus, or distal end of femur. Osteosarcoma tends to affect regions around the knee in 60% of cases, 15% around the hip, 10% at the shoulder, and 8% in the jaw. The tumor is solid, hard, irregular ("fir-tree," "moth-eaten", or "sun-burst" appearance on X-ray examination) due to the tumor spicules of calcified bone radiating in right angles. These right angles form what is known as a Codman triangle, which is characteristic but not diagnostic of osteosarcoma. Surrounding tissues are infiltrated.

Microscopically: The characteristic feature of osteosarcoma is presence of osteoid (bone formation) within the tumor. Tumor cells are very pleomorphic (anaplastic), some are giant, numerous atypical mitoses. These cells produce osteoid describing irregular trabeculae (amorphous, eosinophilic/pink) with or without central calcification (hematoxylinophilic/blue, granular)—tumor bone. Tumor cells are included in the osteoid matrix. Depending on the features of the tumor cells present (whether they resemble bone cells, cartilage cells, or fibroblast cells), the tumor can be subclassified. Osteosarcomas may exhibit multinucleated osteoclast-like giant cells.[21]

Family physicians and orthopedists rarely see a malignant bone tumor (most bone tumors are benign). The route to osteosarcoma diagnosis usually begins with an X-ray, continues with a combination of scans (CT scan, PET scan, bone scan, MRI) and ends with a surgical biopsy. A characteristic often seen in an X-ray is Codman's triangle, which is basically a subperiosteal lesion formed when the periosteum is raised due to the tumor. Films are suggestive, but bone biopsy is the only definitive method to determine whether a tumor is malignant or benign.

Most times, the early signs of osteosarcoma are caught on X-rays taken during routine dental check-ups. Osteosarcoma frequently develops in the mandible (lower jaw); accordingly, dentists are trained to look for signs that may suggest osteosarcoma. Even though radiographic findings for this cancer vary greatly, one usually sees a symmetrical widening of the periodontal ligament space. If the dentist has reason to suspects osteosarcoma or another underlying disorder, he or she would refer the person to an Oral & Maxillofacial surgeon for biopsy. A biopsy of suspected osteosarcoma outside of the facial region should be performed by a qualified orthopedic oncologist. The American Cancer Society states: "Probably in no other cancer is it as important to perform this procedure properly. An improperly performed biopsy may make it difficult to save the affected limb from amputation." It may also metastasise to the lungs, mainly appearing on the chest X-ray as solitary or multiple round nodules most common at the lower regions.

Osteosarcoma is the most common histological form of primary bone sarcoma.[22]

A complete radical, surgical, en bloc resection of the cancer, is the treatment of choice in osteosarcoma.[22] Although about 90% of people are able to have limb-salvage surgery, complications, particularly infection, prosthetic loosening and non-union, or local tumor recurrence may cause the need for further surgery or amputation.

Mifamurtide is used after a person has had surgery to remove the tumor and together with chemotherapy to kill remaining cancer cells to reduce the risk of cancer recurrence. Also, the option to have rotationplasty after the tumor is taken out exists.[24]

People with osteosarcoma are best managed by a medical oncologist and an orthopedic oncologist experienced in managing sarcomas. Current standard treatment is to use neoadjuvant chemotherapy (chemotherapy given before surgery) followed by surgical resection. The percentage of tumor cell necrosis (cell death) seen in the tumor after surgery gives an idea of the prognosis and also lets the oncologist know if the chemotherapy regimen should be altered after surgery.

Standard therapy is a combination of limb-salvage orthopedic surgery when possible (or amputation in some cases) and a combination of high-dose methotrexate with leucovorin rescue, intra-arterial cisplatin, adriamycin, ifosfamide with mesna, BCD (bleomycin, cyclophosphamide, dactinomycin), etoposide, and muramyl tripeptide.[25] Rotationplasty may be used. Ifosfamide can be used as an adjuvant treatment if the necrosis rate is low.

Despite the success of chemotherapy for osteosarcoma, it has one of the lowest survival rates for pediatric cancer. The best reported 10-year survival rate is 92%; the protocol used is an aggressive intra-arterial regimen that individualizes therapy based on arteriographic response.[26] Three-year event-free survival ranges from 50% to 75%, and five-year survival ranges from 60% to 85+% in some studies. Overall, 65–70% people treated five years ago will be alive today.[27] These survival rates are overall averages and vary greatly depending on the individual necrosis rate.

Prognosis is separated into three groups.

Deaths due to malignant neoplasms of the bones and joints account for an unknown number of childhood cancer deaths. Mortality rates due to osteosarcoma have been declining at about 1.3% per year. Long-term survival probabilities for osteosarcoma have improved dramatically during the late 20th century and approximated 68% in 2009.[22]

Osteosarcoma is the eighth-most common form of childhood cancer, comprising 2.4% of all malignancies in children, and about 20% of all primary bone cancers.[22]

It originates more frequently in the metaphyseal region of tubular long bones, with 42% occurring in the femur, 19% in the tibia, and 10% in the humerus. About 8% of all cases occur in the skull and jaw, and another 8% in the pelvis.[22]

Around 300 of the 900 people diagnosed in the United States will die each year. A second peak in incidence occurs in the elderly, usually associated with an underlying bone pathology such as Paget's disease of bone. 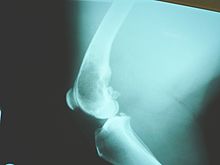 X-ray of osteosarcoma of the distal femur in a dog

The most commonly affected bones are the proximal humerus, the distal radius, the distal femur, and the tibia,[31] following the basic premise "far from the elbow, close to the knee". Other sites include the ribs, the mandible, the spine, and the pelvis. Rarely, osteosarcoma may arise from soft tissues (extraskeletal osteosarcoma). Metastasis of tumors involving the limb bones is very common, usually to the lungs. The tumor causes a great deal of pain, and can even lead to fracture of the affected bone. As with human osteosarcoma, bone biopsy is the definitive method to reach a final diagnosis. Osteosarcoma should be differentiated from other bone tumours and a range of other lesions, such as osteomyelitis. Differential diagnosis of the osteosarcoma of the skull in particular includes, among others, chondrosarcoma and the multilobular tumour of bone.[32][33]

Osteosarcoma is the most common bone tumor in dogs and typically afflicts middle-aged large and giant breed dogs such as Irish Wolfhounds, Greyhounds, German Shepherds, Rottweilers, mountain breeds (Great Pyrenees, St. Bernard, Leonberger, Newfoundland), Doberman Pinschers and Great Danes. It has a 10-fold greater incidence in dogs than humans.[34] A hereditary base has been shown in St. Bernard dogs.[35] Spayed/neutered dogs have twice the risk of intact ones to develop osteosarcoma.[36] Infestation with the parasite Spirocerca lupi can cause osteosarcoma of the esophagus.[37]

Amputation is the initial treatment, although this alone will not prevent metastasis. Chemotherapy combined with amputation improves the survival time, but most dogs still die within a year.[31] Surgical techniques designed to save the leg (limb-sparing procedures) do not improve the prognosis.

Some current studies indicate osteoclast inhibitors such as alendronate and pamidronate may have beneficial effects on the quality of life by reducing osteolysis, thus reducing the degree of pain, as well as the risk of pathological fractures.[38]

Osteosarcoma is also the most common bone tumor in cats, although not as frequently encountered, and most typically affects the rear legs. The cancer is generally less aggressive in cats than in dogs, so amputation alone can lead to a significant survival time in many affected cats, though post-amputation chemotherapy is recommended when a high grade is confirmed on histopathology.[31]